On Monday night, Federal Bureau of Investigation officials raided former President Donald Trump’s residence at Mar-a-Lago after following through on a search warrant. In so doing, a federal government agency undertook the most severe and egregious action against a former president in the history of our country. This raid goes far beyond an alleged need to recover documents and return them to the National Archives. This is about the weaponization of the federal government against political opponents and the American people.

To say this raid was unprecedented would be an understatement. Never before have such measures been taken in similar circumstances. In fact, I served on the Benghazi Committee that, in part, investigated Hilary Clinton’s illegal handling of classified information during her time as secretary of State. We proved she was keeping thousands of classified documents at her private residence unlawfully. Did the FBI raid her home, looking for these documents? Absolutely not! As of yet, there is no claim that the documents in Trump’s residence were at risk of being destroyed or published. Contrast that with Clinton, who used BleachBit to make sure no one ever saw the material she possessed.

The simple truth is that this is but one example of the Democrats continuing to weaponize federal government agencies against Americans who do not share their narrow political ideology. This isn’t about Trump; it’s about you.

The Democrats are gearing up to chase hard-working small businesses and families by hiring 87,000 new IRS agents to target Americans. How long before these new agents are unleashed on the American people? How long before they start going after Christian, pro-life pregnancy centers? How long before working and middle-class Americans – cops, machinists, and farmers, to name a few – start being audited due to their donations to the Republican Party?

The Capitol Hill Pregnancy Center has been one of many pregnancy help organizations in the U.S. to have been targeted for vandalism since the Dobbs leak.  (Mary Margaret Olohan Twitter)

The IRS has a very recent history of denying approval to conservative non-profits because of their political views. They weaponized the FISA warrant process to go after innocent Americans based on Rep. Adam Schiff, D-CA, and Hillary Clinton’s Russia Hoax. The Department of Justice (DOJ) wasted $32 million taxpayer dollars on the Mueller report, which found no evidence of collusion or obstruction of justice.

The Biden DOJ weaponized the FBI against America’s parents by labeling them "terrorists" if they voiced concerns about Marxist-based, critical race theory subject matter in a free and democratic manner. Health and safety rules were abused to keep children, especially kids in underprivileged areas, from attending school, leaving them behind for years and potentially the rest of their lives.

And the same Justice Department still hasn’t found the time to prosecute Hunter Biden for a litany of shady foreign deals that might implicate his father, the current president of the United States. Why is the DOJ slow-rolling this effort? It is the (D) next to Joe Biden’s name.

Here’s another example. In mid-June, following the pro-life Dobbs Supreme Court ruling, America experienced scores of attacks on pregnancy centers across the country, many of them firebombing or arson. So far, DOJ has yet to make a single arrest in any of these cases. Yet when a Planned Parenthood center was attacked in July, a multi-agency coalition was able to locate the suspect and arrest him within four days. Why the double standard? Because Planned Parenthood is a bastion of progressive ideology and a stronghold of Democrat donors. 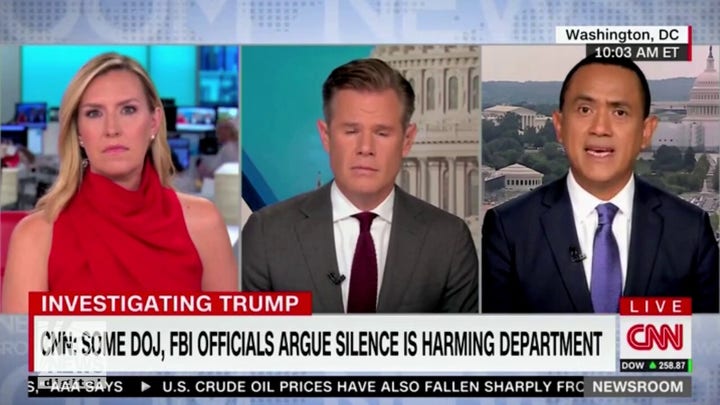 The raid on Mar-a-Lago was an attack on all Americans and a harbinger of what is to come. The progressive left sees the institutions of our federal government not as safeguards that serve the American people, but as useful tools, even powerful weapons, that must be utilized to advance their specific agenda.

Our next president will have to do more than just publish civil service reform, such as Schedule F, although that’s a good start. He will need to ensure every federal civilian employee is subject to hiring, firing, and promotion based on merit and performance – just like all those working outside the government swamp. Until then, we must continue to call out this governmental malfeasance and demand that every citizen be treated equally under the law by our federal government. They work for us; we are not their enemy – nor will we be their victims.