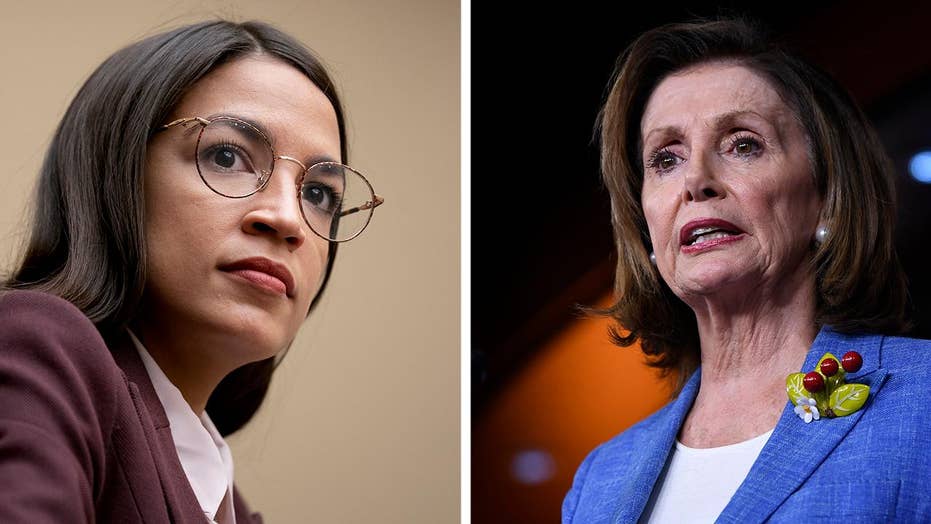 While House Speaker Nancy Pelosi of California and Rep. Alexandria Ocasio-Cortez of New York met Friday to try to stop the public feuding between moderate Democrats and those on the far left of their party, I doubt they’ll succeed.

Pelosi, 79, is a pragmatist and a master legislative strategist who has served in the House since 1987 – before the 29-year-old Ocasio-Cortez was born.

Though Ocasio-Cortez has only been in office since January, she has drawn extraordinarily heavy media coverage because of her extreme progressive positions and inflammatory tweets and comments. She takes strong ideological stands that have drawn sharp criticism from President Trump, other Republicans and many Democrats.

PELOSI, OCASIO-CORTEZ MEET IN BID TO EASE PARTY INFIGHTING AND 'CLEAR THE AIR'

Pelosi and Ocasio-Cortez have had a contentious few months that have highlighted the divide between mainstream Democrats who have led the party for years and can cut deals with Republicans to get bills passed, and young insurgents who reject compromising their positions with anyone.

Both Pelosi and Ocasio-Cortez sought to paper over their very real differences after their meeting. Pelosi tweeted out a photo of the two standing together and smiling.

Pelosi told reporters afterward, referring to Ocasio-Cortez: “The congresswoman is a very gracious member of Congress, so we had a very positive conversation." And Pelosi added: "I feel ... it's like you're in a family. In a family, you have your differences, but you're still family. We just had a meeting to clear the air."

Ocasio told reporters that the meeting with Pelosi was “productive” and said: “I’m looking forward to us continuing our work, and as always, I think the speaker respects the fact that we’re coming together as a party.”

The meeting was indicative of what appears to be a unity strategy by Pelosi to ensure that Ocasio-Cortez and three other far-left freshmen congresswomen known collectively as “the Squad” are better integrated into Democratic Party politics leading into the 2020 election season.

Actually, it’s not clear to me that “the Squad” is committed to the Democratic Party in any way. The four congresswomen seem more interested in making their mark as individuals than in being team players in the House Democratic caucus.

The other three congresswomen are s Ilhan Omar of Minnesota, Ayanna Pressley of Massachusetts and Rashida Tlaib of Michigan.

Pelosi is a consensus builder, understanding that Democrats must be united to achieve their common goals in the House and in the election campaign. Representing San Francisco, Pelosi is far more liberal than many Democrats – including me.

But Pelosi understands that if Democrats in her caucus representing Republican-leaning and toss-up districts take far-left positions they will likely lose their re-election bids and the House will revert to Republican control.

Pelosi knows all too well that the success the Democratic Party had in the 2018 midterm elections – when it recaptured majority control of the House – was a result of running diverse, moderate candidates in swing districts that have not been responsive to the most extreme progressive and socialist Democrats who ran in the safer coastal and urban districts.

Thus, Pelosi has certainly discerned that if the face of the Democratic Party becomes “the Squad,” President Trump's reelection becomes far more likely.

In contrast, the members of “the Squad” individually and collectively comprehended the power they wield as irritants and viral social media stars, rather than as members of the Democratic caucus who give traditional deference to party leaders and focus on local media in their home districts rather than building national profiles.

Actually, it’s not clear to me that “the Squad” is committed to the Democratic Party in any way. The four congresswomen seem more interested in making their mark as individuals than in being team players in the House Democratic caucus.

But here’s the reality that Pelosi understands and that the four freshmen congresswomen need to grasp if they want their party to do well in the 2020 elections: If the presidential election becomes a contest between President Trump and a radical socialist Democratic Party, Trump will most likely be elected to a second term.

Like him or not, Trump has an incredibly successful record on jobs and the economy. Voters are not going to want to switch horses in midstream, as the old political saying goes, if they believe the Democratic Party is run by extremists who favor the Green New Deal, “Medicare-for-all,” eliminating student debt, free college, and a confiscatory tax system that emphasizes redistribution over economic growth.

To be sure, Trump has been, in my judgment, unnecessarily divisive and has used unreasonably vexing rhetoric, particularity on Twitter and at his rallies. For example, he did too little to stop chants of “send her back” referring to Rep. Omar, an immigrant from Somalia. Too often, Trump has stoked divisions in our country rather than seeking to unite Americans around common goals and the common national identity we share.

However, America is still a center-right nation, and the American people simply will not be receptive to an insurgent lurch to socialism and other extreme-left positions.

Pelosi needs to give Ocasio-Cortez an ultimatum – and I hope the speaker already did at their meeting Friday.

This ultimatum would present Ocasio-Cortez with two choices:

On the one hand, Ocasio-Cortez can continue to get huge national media coverage, upstage the speaker, and be a major part of the reason why Democrats do not succeed in retaking the White House and potentially put their majority in the House at risk.

Alternatively, Ocasio-Cortez can play ball and be a central component to the future of the Democratic Party’s leadership by diminishing aggressive and nationally noticed socialist rhetoric.

The second option of playing ball is a reasonable deal for Ocasio-Cortez and other members of “the Squad” and they’d be wise to take it – but I don't believe for a second they will.

While the meeting between the powerful speaker and the young insurgent congresswoman may have been largely congenial, I am sure it will be business as usual next week, to the glee and delight of the Republicans – and especially President Trump.