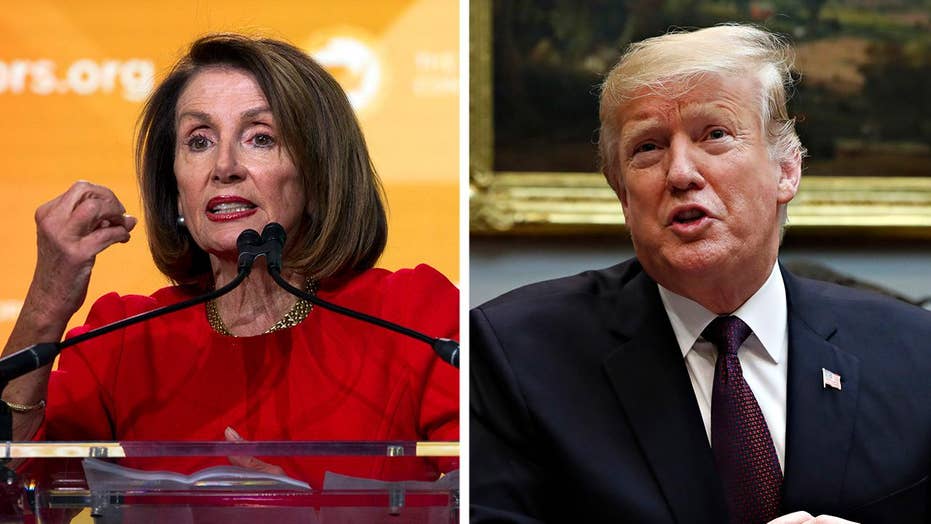 Speaker of the House Nancy Pelosi pulls her invitation to President Trump to deliver the State of the Union on January 29; chief White House correspondent John Roberts reports.

House Speaker Nancy Pelosi is wrong to deny President Trump permission to deliver his State of the Union address in the House chamber as scheduled on Tuesday.

The State of the Union is not only a national tradition – it has its roots in our founding documents. It has been delivered by Democratic and Republican presidents in the House chamber since President Woodrow Wilson began the tradition in 1913, departing from the previous custom of giving a Congress a written message.

Pelosi, D-Calif., made a considerable misstep when she sent the president a short letter Wednesday stating: “I am writing to inform you that the House of Representatives will not consider a concurrent resolution authorizing the president’s State of the Union address in the House Chamber until government has opened.”

PELOSI SAYS SHE WON’T ALLOW STATE OF THE UNION DURING SHUTDOWN; TRUMP WILL ‘DO SOMETHING IN THE ALTERNATIVE'

The House and Senate must both approve a formal invitation to the president in the form of a concurrent resolution saying they will meet together for him to speak in the House chamber.

Earlier Wednesday, President Trump said in a letter to Pelosi that he intended to deliver the State of the Union address as planned on Tuesday in the House, despite Pelosi’s previous request that he postpone the speech until after the partial government shutdown ends or deliver a written message instead.

Pelosi had cited security concerns during the shutdown– but President Trump and the Homeland Security Department said providing security would not be a problem.

"The State of the Union speech has been canceled because she doesn’t want to hear the truth. She’s afraid of the truth," President Trump said of Pelosi during an event at the White House after Pelosi’s announcement.

Regardless of the ongoing government shutdown, the State of the Union should not be used as a bargaining chip by either party. And no congressional leader should play childish games with the president of the United States over something as important as this address to the country and the world.

Regardless of the ongoing government shutdown, the State of the Union should not be used as a bargaining chip by either party. And no congressional leader should play childish games with the president of the United States over something as important as this address to the country and the world.

With Pelosi foolishly refusing to allow the president to deliver the State of the Union in the House chamber, some alternate locations that have been floated for the speech – including the White House, Republican-held state legislative chambers, or even at our border with Mexico.

But for the sake of national unity, the State of the Union should be delivered where it has been traditionally delivered for more than 100 years – the House chamber.

What is arguably most concerning about Speaker Pelosi refusing to allow the State of the Union to proceed as planned is that her actions are seemingly the continuation of a very wrongheaded approach by which the Democrats obstruct President Trump at every possible step.

Instead, Democrats should work together with Republicans in Congress and the president to accomplish actual reforms and lead in the way that voters who gave them back the House majority expect.

Indeed, the White House is already attacking Democrats on this precise point, with press secretary Sarah Sanders arguing that “the president is a leader and Nancy Pelosi is nothing more than an obstructionist.”

Despite 60 percent of Americans in the AP-NORC poll blaming President Trump for the ongoing government shutdown, I am afraid that Speaker Pelosi has begun overplaying her hand. Officially denying the president the House chamber sets our entire country back.

If the Democrats – and Nancy Pelosi especially – are serious about reopening the government, they should have swallowed their pride and demonstrated a willingness to cooperate with President Trump by allowing him to deliver the State of the Union from the House chamber.

The Democrats should have done this despite their ongoing dispute with the president over his refusal to end the partial government shutdown unless Congress gives him $5.7 billion for the wall or other barrier he wants to build along our southern border. Pelosi and Senate Minority Leader Chuck Schumer, D-N.Y., have so far refused to provide any money for wall funding.

The American people elect a president and members of Congress to get things done – not wage constant political warfare. It’s long past time for Democratic and Republican leaders in the House and Senate to sit down with the president and his staff to negotiate comprehensive immigration reform.

This reform should include both border security and protections for all undocumented immigrants – along with reopening the federal government and giving federal workers their paychecks.

It’s reassuring that there are some indications that Democrats are willing to provide additional funds for border security.

House Majority Whip James Clyburn, D-S.C., recently indicated that Democrats are willing to provide extra border security funding in the form of “the technology that’s available to us to wall off intrusions.”

This is a useful first step – but more must be done.

On Friday, the 800,000 federal employees who are be required to work without pay or are furloughed will miss their second paycheck. The government shutdown has gone on for far too long and it is time to reach a deal.

Democrats must understand that border security is a serious problem in our country and enter negotiations for the sake of all undocumented immigrants. They should work to reach a compromise with congressional Republicans and the president to get things done on behalf of the American people and bring our country back together.