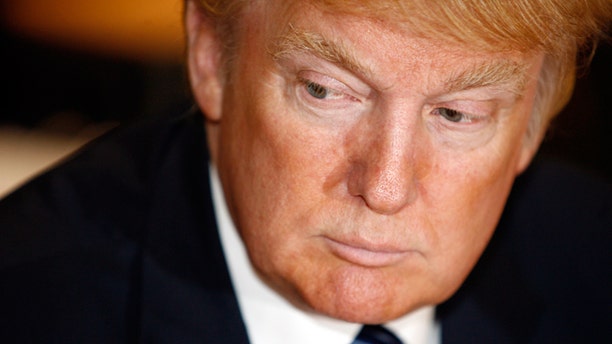 Following a meeting between a group of evangelical leaders and Donald Trump last week, Dr. James Dobson, founder of Focus on the Family, was interviewed by Pennsylvania pastor Michael Anthony. Dobson told Anthony that Trump had recently come “to accept a relationship with Christ” and is now a “baby Christian.”

Dobson was vague about the details of Trump’s supposed religious conversion, telling Anthony that while he knows the person responsible for “leading” Trump to Jesus, he would not name the person and couldn’t specify the time or place. “I don’t know when it was,” said Dobson, “but it has not been long.”

If it occurred, it must have been within the last three weeks. Here is a transcript of what Trump told me he believed about Jesus in a June 6 interview I conducted with him:

“CT: Every president has called upon God at some point. Lincoln spoke of not being able to hold the office of the presidency without spending time on his knees. You have confessed that you are a Christian…

DT: And I have also won much evangelical support.

CT: Yes, I know that. You have said you never felt the need to ask for God’s forgiveness, and yet repentance for one’s sins is a precondition to salvation. I ask you the question Jesus asked of Peter: Who do you say He is?

DT: I will be asking for forgiveness, but hopefully I won’t have to be asking for much forgiveness. As you know, I am Presbyterian and Protestant. I’ve had great relationships and developed even greater relationships with ministers. We have tremendous support from the clergy. I think I will be doing very well during the election with evangelicals and with Christians. In the Middle East — and this is prior to the migration — you had almost no chance of coming into the United States. Christians from Syria, of which there were many, many of their heads … chopped off. If you were a Muslim from Syria, it was one of the easiest places to come in (to the U.S.). I thought that was deplorable. I’m going to treat my religion, which is Christian, with great respect and care.

CT: Who do you say Jesus is?

No one can fully know what is in another person’s heart, but this is not the language most evangelicals would consider as evidence of a religious conversion.

In his classic book “Mere Christianity,” C.S. Lewis had this to say about people who call Jesus of Nazareth by something other than what He called Himself: “A man who was merely a man and said the sort of things Jesus said would not be a great moral teacher. He would either be a lunatic — on the level with a man who says he is a poached egg — or he would be the Devil of Hell. You must take your choice. Either this was, and is, the Son of God, or else a madman or something worse. You can shut him up for a fool or you can fall at his feet and call him Lord and God. But let us not come with any patronizing nonsense about his being a great human teacher. He has not left that open to us.”

It is a strange thing when evangelicals divide their loyalty, hoping for an earthly “deliverer” as if any politician, or businessman, could save the country from its collective sins. They project their faith on many who do not share it and approve of that faith only in Republicans, never in Democrats, some of whom demonstrate more knowledge of Scripture and practice its teachings better than some Republicans.

Think of it this way. If you are about to have surgery, wouldn’t you want the most competent doctor you can find regardless of his faith? That should also be the standard for electing a president.