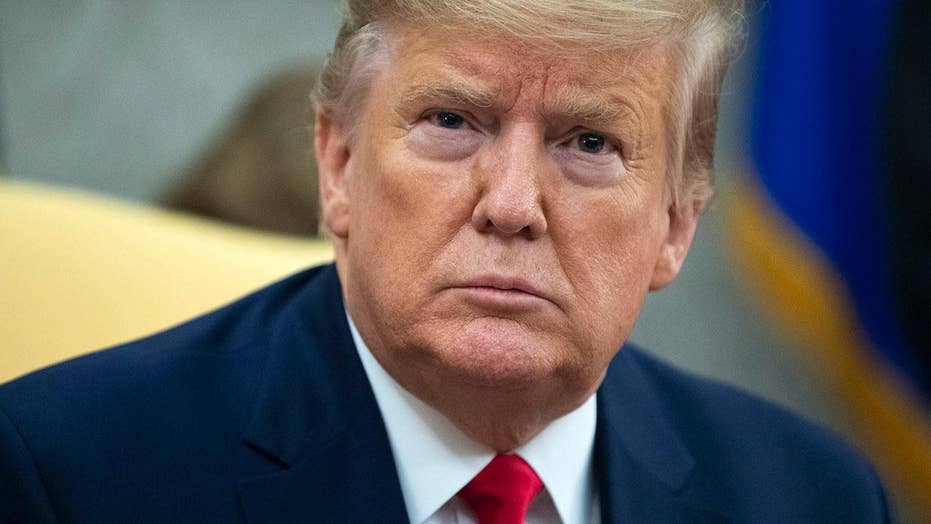 From the Mueller report to the impeachment probe, 'Journal Editorial Report' recaps what we learned about President Trump and the Democrats investigating him.

Nancy Pelosi became speaker of the House for the second time; there was a government shutdown; special counsel Robert Mueller’s two-year investigation came to an end; the Democrat presidential primary campaigns began; the American economy enjoyed historic prolonged vibrancy; anti-Trump Republicans like John Kasich and Jeb Bush started and ended their search for a primary challenger to run against the president, and President Trump was fraudulently impeached by unhinged partisans in the House of Representatives.

But through it all, President Donald Trump — the ultimate political outsider — continues to plow forward, never relenting in his focus of putting America First.

JAMES CARAFANO: US AIRSTRIKES IN MIDEAST — SENDING THIS CLEAR MESSAGE TO FRIENDS AND FOES ALIKE

In the face of unprecedented attacks from the left — including a mainstream media that in 2019 was fully exposed as a vicious partner of Democrat political operatives — Trump perseveres. Facing an onslaught of fake news that would have brought other leaders to their knees, Trump stands tall heading into the fourth year of his presidency.

The year began with a government shutdown caused by congressional Democrats refusing to acknowledge the crisis at our Southern border. Undeterred, Trump demonstrated true presidential leadership by ordering billions in appropriated military funds to be used to construct the much-needed border wall.

Always letting the polls dictate their actions, Democrats conceded their disastrous policy position in June, prompting headlines such as “Democrats make U-turn on calling border a ‘manufactured crisis.’” Even in the face of unprecedented liberal obstruction, more than 500 miles of a border wall is under construction thanks to the president.

At his State of the Union address, President Trump declared that “America will never be a socialist country.” That certainly hasn’t stopped the Democrats from lurching further to the left. From the economy-crippling Green New Deal to the lie of “Medicare-for-all,” to job-killing tax increases, 2019 has revealed the left’s true vision for America — and it’s an ugly one.

Throughout the past year, Democrats proved that they lied to the American people to get into power in 2018. Despite the promises, there was never any intention of working with Trump in a bipartisan manner on important policies for the American people. The real Democrat agenda started and ended with impeaching the duly elected president of the United States by any means necessary.

In February, Intelligence Committee Chairman Adam Schiff was on television lying about evidence of Trump campaign collusion with Russia that he said was “in plain sight.” Two months later, Special Counsel Robert Mueller’s report was made public and it concluded the exact opposite — not only was there no collusion whatsoever, there was no obstruction of justice either.

The sham inquiry that transpired over this year will do lasting damage to our republic because impeachment is now seen as just another political campaign weapon.

Over the summer, with no positive agenda to offer the American people, the Democrats pushed the reckless narrative that the economy was headed toward a recession. Unfortunately for them, the Trump economy is as resilient as the man himself. The year began in earnest with a very low unemployment rate of 4 percent, only to plunge to the historic level of 3.5 percent by the end of 2019.

Since Trump’s election three years ago, 7.2 million jobs have been created — with nearly 2 million new jobs in 2019 alone. Additionally, wages have increased by 3.1 percent over the past year. On top of all that, the president has made it an ongoing priority to slash overly burdensome government regulations that stifle economic growth.

In September, with Mueller’s findings in the rearview mirror and Chairman Jerry Nadler’s hearings on the report a complete failure — thanks in large part to former Trump campaign manager Corey Lewandowski — the American people were ready for impeachment-crazed Democrats in Congress to turn the corner and work with the president on issues important to them. But Speaker Pelosi would have none of it.  Instead, she and her caucus of left-wing socialists made the ill-fated decision to turn a routine phone call between Trump and the president of Ukraine into another partisan impeachment witch hunt.

The sham inquiry that transpired over the next three months will do lasting damage to our republic because impeachment is now seen as just another political campaign weapon. Pelosi’s continued refusal to transmit the articles of impeachment to the Senate confirms what’s been known all along — this entire effort by the left is an orchestrated stunt designed to hurt Trump’s reelection chances.

Let it not be forgotten that in the midst of the Democrat impeachment circus and accompanying media frenzy, Trump never took his eye off the ball for the American people. In October, the president ordered the elimination of the world’s most wanted terrorist Abu Bakr al-Baghdadi, putting an exclamation point on his promise to destroy ISIS.

Heading into 2020, Trump’s amazing legacy is taking shape. When it’s all said and done, his most lasting accomplishment may very well be his all-important effort to fill the federal bench with strict constitutionalists. During the Trump presidency, 187 judicial appointees have been confirmed by the U.S. Senate, including an astonishing 102 in 2019 alone.

In a year that began with a small band of anti-Trump establishment “has-beens” desperately looking for someone — anyone — to challenge the president for the 2020 nomination, 2019 comes to an end with a unified and optimistic Republican Party squarely behind the incumbent.

While most of the optimism on the center-right is driven by Trump’s historic record of accomplishment, it’s also a product of the pathetic field of highly mediocre Democrats vying for their party’s nomination for president. As the far left field bumbles their way to the Iowa caucuses on Feb. 3, reality is starting to set in for 2020. Democrats understand that they can’t defeat a historical figure with mediocrity.


David N. Bossie is president of Citizens United, a Fox News contributor, the 2016 deputy campaign manager for Donald Trump for President, and the former chief investigator for the U.S. House of Representatives Committee on Government Reform and Oversight during the Clinton administration. He is the co-author of "Let Trump Be Trump"  and “Trump’s Enemies.”