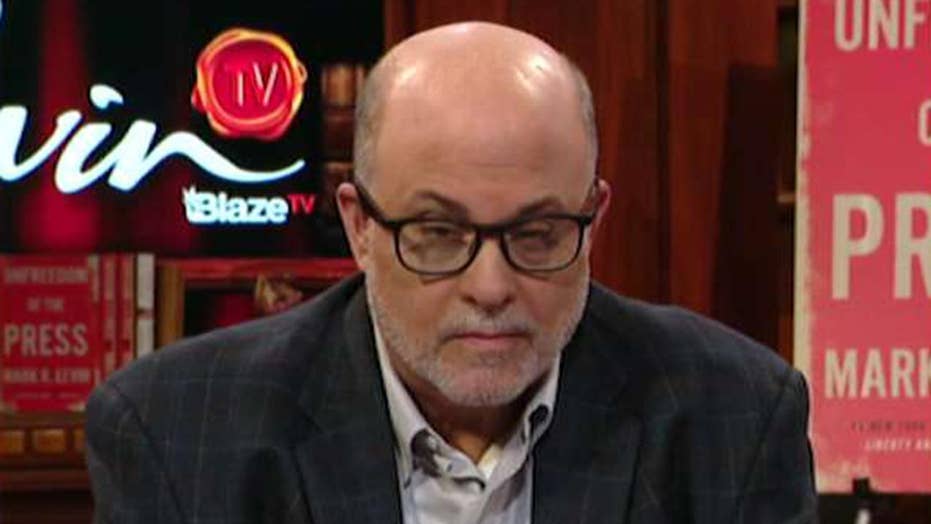 Mark Levin on the media's relentless attacks on President Trump

Judge Jeanine goes one-on-one with Mark Levin, author of the new book 'Unfreedom of the Press.'

On Memorial Day weekend, it’s important to recall not just the members of the military who gave their lives protect and preserve our nation. It’s also essential that we honor the institutions they protected.

President Trump isn’t the big danger to those institutions, no matter how much the news media claim he is. The people who most want to undermine the United States are on the left – and the liberal news media are helping them. Liberals are attacking our Constitution, Supreme Court, bicameral legislature and our very electoral system.

It’s understandable that both political parties try to work government to their advantage. This is different. It’s a concerted effort to manipulate key parts of our government so the left wins. It’s not just a few statues drawing protests, or Democratic candidates bashing Thomas Jefferson. The entire American experiment is at risk.

Claims that key constitutional rights – especially the First and Second Amendments – must be restricted are now commonplace in the press. How we vote and the government we vote for all must be modified, according to many in the liberal media.

It begins with the founding documents. The left started tearing at the Constitution even during the administration of President Barack Obama.

Vox Editor Ezra Klein, then with The Washington Post, mocked the Constitution as “confusing” “because it was written more than 100 years ago.”

Newsweek's Ben Adler was equally critical of the “dangerous” idea that all bills must be approved as constitutional before they can be voted on.

Fast forward to present day and there is a new rationale – to get President Trump.

MSNBC has a particular bent to undo parts of the Constitution. “Morning Joe” regular Mike Barnicle suggested ignoring the document, asking: “Can we rewrite the Constitution and have another president take over right now?”

That attitude has undermined support for much of the First Amendment on the left. Democrats proposed HR1 soon after gaining majority control of the House of Representatives this year. The bill includes a provision to “reign (sic) in” corporate speech that the Supreme Court considered protected by the Constitution.

Other liberal proposals – such as the Equality Act – would restrict religious freedom. Don’t let the nice-sounding name fool you.

CNN Senior Political Analyst Ron Brownstein said the Democratic Party “is being transformed” with such legislation. Reuters’ Kate Ryan described the legislation in the noblest of terms, burying conservative objections about religious freedom. She called it “a bill protecting U.S. citizens from discrimination based on sexual orientation and gender identity.”

Splinter’s Alex Pareene wrote his own call in 2017, urging “that we, as a nation, need to disarm.” He even recommended banning the sale of guns as one solution.

The Washington Post’s editorial board blamed the National Rifle Association and complained, “Congress has been stalling for years” on more gun regulation.

Liberal media aren’t satisfied with the idea of changing the founding documents or restricting rights. They want to change elections and how our government is run.

Now that idea is a matter of left-wing doctrine. The Nation’s national affairs correspondent John Nichols wrote a story in April headlined “Why Democratic Contenders Now Call for Abolishing the Electoral College.” The article ended by urging Democrats to “make the structural reforms that will bring full democracy to the United States.”

In other words, change the current system to minimize small state votes so the left can win.

They didn’t stop there. Former Rep. John Dingell, D-Mich., wanted to get rid of the Senate. That argument pin-balled around liberal media from The Atlantic to GQ and beyond. All because the Democrats didn’t control the Senate or see a likely chance to do so.

The same strategy was revealed after the left lost to Republicans over the nomination of now-Justice Brett Kavanaugh to the Supreme Court. Calls to pack the court landed almost immediately afterward and are now highly popular with Democratic presidential candidates.

MSNBC “Morning Joe” host Joe Scarborough urged Democrats to run on the idea of abolishing the Electoral College as “a national emergency.”

Mother Jones gave the concept the seal of approval in March, publishing a piece headlined “How Court-Packing Went From a Fringe Idea to a Serious Democratic Proposal.” Reporter Pema Levy interviewed members of the group Pack the Courts and highlighted how top Democrats – from presidential hopefuls Sen. Elizabeth Warren of Massachusetts to media favorite Mayor Pete Buttigieg of South Bend., Ind. – now support what the group calls “FDR-style court-packing.”

These threats aren’t theoretical. Many are being openly discussed by Democratic presidential candidates and pushed by the liberal media. They are part of a winner-take-all attitude to democracy. Americans better wake up to the real threats to our republic before it is too late.