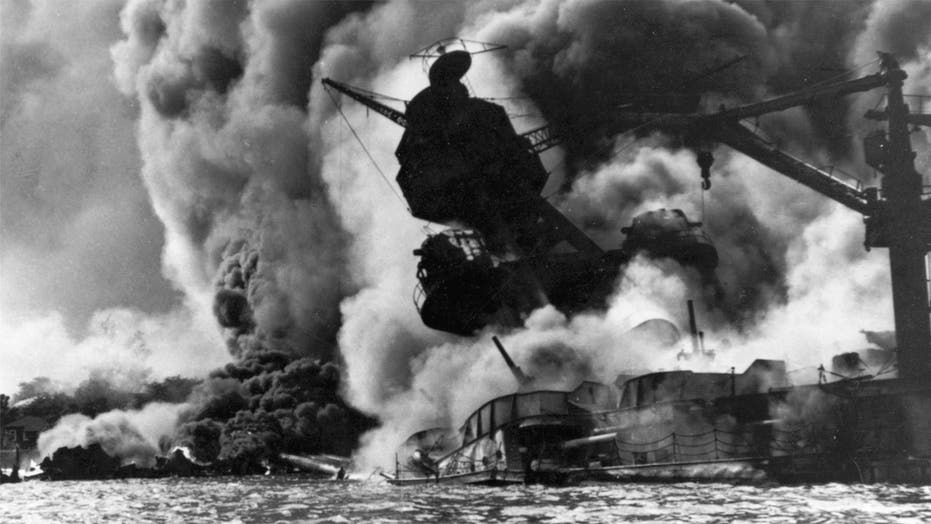 Americans of the 21st century have no idea of the sacrifices made during World War II. Today’s Americans think sacrifice is when Starbucks runs out of cinnamon for their latte mochas.

No doubt the coronavirus is real and scary. And there is talk in the air of World War II-style commitment, but staying home and binge-watching “The Simpsons” is not quite the sacrifice that their parents and grandparents made some 80 years ago. A lot more was involved.

DEFENSE SECRETARY MARK ESPER: IN CORONAVIRUS FIGHT, US MILITARY IS ON THE FRONT LINES

After Dec. 7, 1941, America went on a full war footing and not just the government. “Don’t you know there’s a war on?” was a common exhortation to remind people about going without in that time of national crisis.

So were lightbulbs. So was practically everything else. Civilians were kicked off trains and planes to make way for American servicemen. No one complained.

Meanwhile, Americans collected rubber, aluminum, paper, cooking grease and old stockings and they did so joyously too, for the war effort. Wine and beer were rationed, too, as was hard liquor. Wages were frozen for the most part and unions could not go on strike. With one corporation, President Roosevelt’s men did not like the CEO, so they promptly had him removed from the management of his own company.

A censorship bureau was created by the government to not just go through mail to and from servicemen, but also the rest of America, including suspicious looking envelopes and packages. One columnist wrote, “War is paradoxical, and we accept the idea that even in a war fought to protect the system of which the Bill of Rights is a part, free publication of information must be restricted.”

I used to think Victory Gardens were something of a fable but when I suggested this to my mother, she got indignant. “I had a Victory Garden! We all did!” she stormed. My mother was right, as I later found out. By some accounts, Victory Gardens produced as much as one-third of all vegetables grown in America during the “war years.”

Americans collected rubber, aluminum, paper, cooking grease and old stockings and they did so joyously too, for the war effort. Wine and beer were rationed, too, as was hard liquor. Wages were frozen for the most part and unions could not go on strike. Nobody raised an eyebrow.

My grandfather tried to enlist three times. In each case, the answer from the Draft Board was, “Ellsworth, you are 43 years old, blind as a bat with four dependents. We are not that desperate.” So he became a civil defense block captain.

Both our grandmothers were Rosie the Riveters. One was a bomb inspector and the other tested machine guns. My father, a Boy Scout in the early '40s, distributed morale and informational government posters to grocery stores, churches, bars and restaurants. Posters urged Americans to buy war bonds and to work in war industries and reminded them, “Loose Lips Sink Ships.” Our mother’s two older brothers both served honorably in the Army in Europe.

Our father’s older brother — our Uncle Barney — made the ultimate sacrifice. A Navy radio operator on a TBF-1 Avenger, he was shot down on his 20th birthday over Saigon in January of 1945. The hair of his mother — our grandmother — turned white in a matter of days. But no one in the family ever really recovered.

In the “Arsenal of Democracy,” Detroit, the government told the automakers they could not make more new cars. Instead, they had to build tanks, jeeps and troop transports. Within three weeks of Dec. 7, Ford, Fisher Auto Parts and Goodyear rubber were turning out B-24 and B-25 bombers, using fabricated auto parts. Kelvinator Appliance Co., which made refrigerators, was told by the government to stop and start making propellers and Army helmets. They did.

Americans used ration tickets for everything and had to black out their windows and go through brownouts — to save on electricity — and blackouts — for security practices. Americans rolled bandages, bought war bonds, gave blood and wept and prayed for their sons and daughters in harm’s way — all for their country and for their children.

A memo was sent to every radio station in America from the government outlining broadcast policy. In no uncertain terms, radio stations were told they could not broadcast troop movements, ship arrivals and departures, anything that could aid German and Japanese spies in the United States. Radio stations were also under orders not to use war news for commercial purposes, such as “And here’s the news from the Pacific, brought to you today by Campbell’s Soup!” The government said it had the right to take over any radio station that did not comply with the orders.

Incredibly, the National Association of Broadcasters went even further, sending their own memo warning against “sensationalism, carelessness and second-guessing in news broadcasts — ‘do not’ include the second-guessing of military officers, overestimating American military power or underestimating enemy strength, broadcasting uninformed reports…” Imagine a world in which the media didn’t second guess military leaders?

All listened to the same radio shows, viewed the same movies and newsreels, all ate the same breakfast cereals, men and women dressed up to go out, even just to the store. All attended church on Sunday and synagogue on Saturday. All read the war dispatches. All read Ernie Pyle, the famed war correspondent.

The American flag was flown everywhere. Kate Smith could frequently be heard singing “God Bless America” on the radio.

America truly was united in World War II because we had a common enemy and a common goal, but we were an uncommon country inhabited by uncommon people.

From the afternoon of Dec. 7, 1941, right up to the end of the war, American citizens went without, sacrificed, donated, contributed and gave up many nice things. All gave in their own way and more to a national “war effort.” It was a time of spirit and sacrifice and commitment and patriotism.

It was a remarkable, extraordinary time. Never before or since has America been so unified.