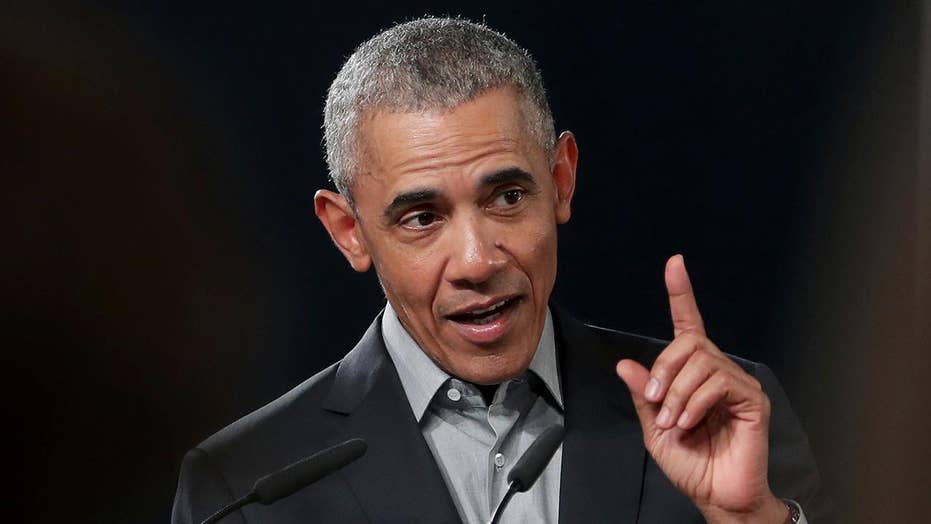 Former President Obama warns Democrats about the danger of fighting each other.

The former president expresses worry about progressives 'shooting at your allies because one of them has strayed from purity on the issues.'&nbsp;

It’s no surprise that President Obama was the one to identify the “circular firing squad” Democrats have created. After all, he’s standing right in the center of it.

During a recent Obama Foundation event in Berlin, the former president spoke about the need for unity within the party, warning Democrats not to turn the tactics they use against Republicans against one another.

"One of the things I do worry about sometimes among progressives in the United States ... (is) where you start shooting at your allies because one of them has strayed from purity on the issues. And when that happens, typically the overall effort and movement weakens," Obama said.

The former president admitted he is worried that the far left is creating a "circular firing squad" with purity tests and ideological "rigidity."

By portraying his opponents as unethical monsters for opposing things like ObamaCare, President Obama set the tone for the uncompromising stance his party has taken in the age of Trump.

The Democratic Party is indeed eating itself alive, and it’s doing so using the same tactics Obama honed during his eight years in the Oval Office. Labeling anyone who disagrees with their ideas as racist, bigoted, or simply evil is quickly becoming a tactic that the most radical Democrats are using against a dwindling number of moderate members of their own party.

Freshman Rep. Alexandria Ocasio-Cortez, D-N.Y., who proudly and accurately calls herself a socialist, has demonstrated the phenomenon perfectly with her entitled proclamation that “I’m the boss.”

Unlike some moderate Democrats, Ocasio-Cortez is willing to dismantle the U.S. economy in a quixotic crusade to combat climate change.

In the congresswoman’s view, the reluctance of some Democrats to embrace her radical and unrealistic climate policies renders those mainstream members of her party illegitimate. She’d like them to just step aside to let her and others who share her extremist impulses dictate public policy.

While he may never admit it, this is the Democratic Party that Obama helped create by framing policy debates as moral crusades. By portraying his opponents as unethical monsters for opposing things like ObamaCare, President Obama set the tone for the uncompromising stance his party has taken in the age of Trump.

Far-left Democrats are openly planning to support primary challenges against Democratic incumbents they deem insufficiently progressive. The party establishment is countering with threats to officially ostracize groups that support the effort.

House Speaker Nancy Pelosi, D-Calif., has derided Ocasio-Cortez’s Green New Deal as the “green dream or whatever,” and followed that up by dismissing the socialist wing of her party as “like five people.”

President Obama tried resurfacing during the 2018 midterm election campaigns. Outside of President Trump, Obama may have played the biggest role in bringing about the Republicans’ historic gains in Senate and gubernatorial elections, including several wins in key 2020 battleground states.

In each instance, Obama’s favored candidates failed miserably, losing to their Republican opponents.

Sens. Joe Manchin of West Virginia and Sherrod Brown of Ohio were among the few Democratic incumbents facing re-election to retain their Senate seats in 2018, and both of them wisely avoided having Obama campaign for them.

It’s too late for Obama to save Democrats from the circular firing squad he helped create. This is bad news for Democratic prospects in the 2020 elections – and good news for Republicans.