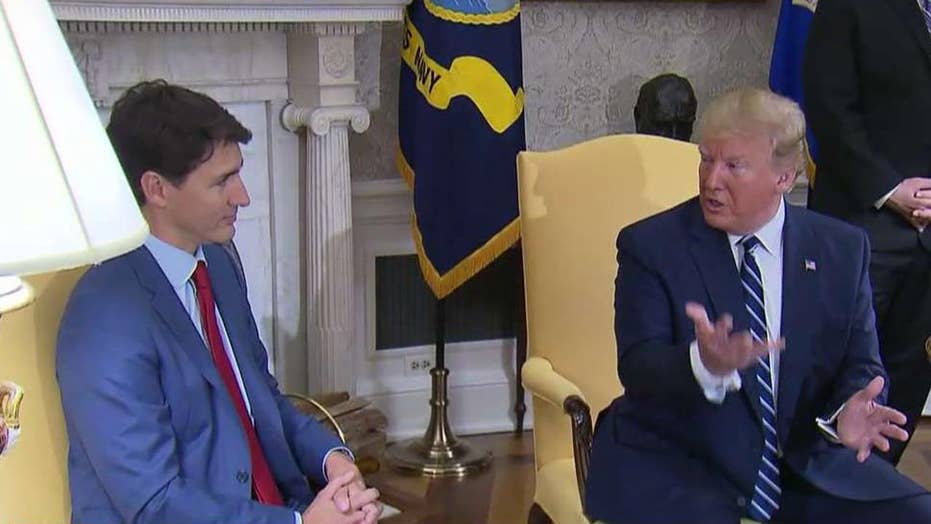 Trump says he's confident about trade deal between US, Canada and Mexico

Congress scolds presidents who go beyond their constitutional powers and act unilaterally without their advice and consent. Congress also demands that as a co-equal branch they need to be brought in on agreements that require their action.

With regard to the USMCA, President Trump negotiated and produced a revised trade agreement with Mexico and Canada months ago. In fact, the leaders of Mexico, Canada and the United States signed the USMCA in November of 2018. Never has a negotiation been so transparent and covered by the media.

NAFTA was passed by Congress and signed into law by President Clinton 25 years ago. There was a need for it to be renegotiated as the terms and conditions no longer were germane to today’s economy, labor force or other economic and social conditions. Despite all of that – Congress has yet to act on USMCA.

So, is it any wonder that, when presidents act in good faith and in sync with the Constitution, and then Congress refuses to act, that it might frustrate the Executive Branch and harm America’s ability to be taken seriously by friends, adversaries and enemies? Thus, it leads to the need for presidents to act unilaterally and hope for the best when the courts are asked to uphold their authority.

Just this past week, while the American Congress did nothing, the Senate of Mexico took the lead and ratified USMCA with overwhelming support – 114 to 4 with only 3 abstentions. Mexico’s president hailed the passage and said: “It means foreign investment in Mexico; it means guaranteeing trade of the merchandise we produce in Mexico in the United States.”

It’s past time Congress votes to ratify the USMCA. If Nancy Pelosi were to bring the USMCA to the floor for a vote, it would likely pass.

Here is what USMCA means to the United States:

America’s farmers, manufacturers, and ranchers are desperately awaiting Nancy Pelosi to bring the USMCA to the House floor for a vote.

Over 1,000 farm groups and nearly 400 companies and associations have endorsed the USMCA and joined a coalition working to pressure Congress to support the deal.

If ratified, the USMCA would spur economic growth, create thousands of American jobs, and raise wages. It would correct trade imbalances and bring out trade relationship with Canada and Mexico into the 21st century. And it would expand market access and remove unfair trade barriers for farmers.

It’s past time Congress votes to ratify the USMCA. If Nancy Pelosi were to bring the USMCA to the floor for a vote, it would likely pass.

If patriotism was not enough of a reason to pass USMCA, there’s this: politically, many early 2020 primary states will greatly benefit from the passage of the USMCA. As 2020 Democrats hit the campaign trail, they should be forced to answer whether they agree with Pelosi’s USMCA stonewalling.

Now is the time for men and women of goodwill in Congress to come together and beat their political swords into trade plowshares.