A judge’s order this past week halting the use of Title 42 to expel migrants at the U.S.-Mexico border is a warning sign that we are going to see new challenges at our already-strained border.

The border needs real solutions — but if Republicans want to provide them, they should act now. They cannot wait for the new Congress when partisan stalemate between the two chambers will make actual legislation all-but impossible.

In the most recent fiscal year, Border Patrol made more than 2.2 million apprehensions of individuals who had entered the U.S. unlawfully, a new record. And even more concerning than those who were apprehended is the estimated 599,000 individuals who were not.

The end of Title 42 — a public health emergency law — was probably inevitable: to be citing the COVID-19 pandemic has become less and less justifiable as the pandemic fades from most Americans’ minds.

But in some ways, the policy has contributed to the current crisis. Those expelled to Mexico often simply tried to cross again illegally the next day. Without a lawful asylum process, the most desperate were funneled into the dangerous hands of smugglers. Only Congress can provide a plan and resources to prevent a worsened crisis following the end to Title 42.

Republicans appear divided among themselves over the best solution. While some are committed to the idea that immigration — legal or illegal — is too high, a significant portion of Republican lawmakers have co-sponsored bills that presume legal immigration is a good thing. They recognize that some American sectors — such as agriculture, where a severe labor shortage is fueling skyrocketing grocery bills — urgently need more legal immigration in order to bolster domestic growth and economic security.

These same Republicans are also concerned about securing the border and stopping illegal immigration but want to ensure the U.S. does so in a way that maintains due process for those who are seeking asylum.

The majority of white evangelical Christians — four out of five of whom voted for Republicans earlier this month — support both increased legal immigration and more secure borders. 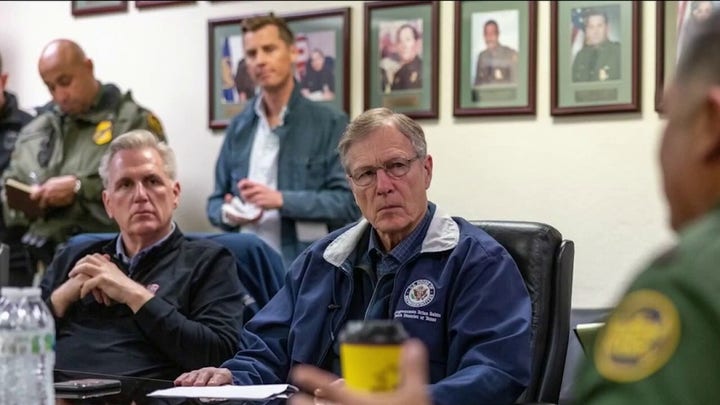 An August study from Lifeway Research found that 83 percent of all evangelicals believe that legal immigration is helpful to the U.S. Additionally, 70 percent believe the U.S. has a moral obligation to receive those who have fled a credible fear of persecution, and 90 percent believe we need secure borders.

However, the divided state of Republican lawmakers’ approaches to immigration makes it unlikely that a House with an extremely narrow GOP majority will be able to assemble the votes necessary to pass a border security bill in the new, divided Congress.

But there is hope — if Republican senators move fast.

Democrats, who generally are less enthusiastic about border security bills, are desperate to find a solution for Dreamers after a recent court decision found that the Deferred Action for Childhood Arrivals (DACA) program was created illegally. With the high likelihood that the Supreme Court will eventually affirm this decision and end DACA altogether, Democrats are under pressure from immigrant-rights groups to pass a version of the Dream Act, which could be paired with robust border security provisions.

A migrant was lowered from a border wall in Naco, Arizona, by a human smuggler, in exclusive Fox News video. (Fox News Channel)

Border-state Senators John Cornyn, R-TX, and Kyrsten Sinema, D-AZ, have introduced a bill that could go a long way toward reducing the chaos at the border: the Bipartisan Border Solutions Act. This bill would expedite the process of allowing those who have fled a credible fear of persecution to become lawful permanent residents and would return those who do not qualify more quickly. Congressional Democrats are unlikely to support that bill unless paired with legislation such as the Dream Act and the Farm Workforce Modernization Act.

Nearly 80 percent of Americans — including 76 percent of Republicans — want Republicans and Democrats to work together to secure the border, allow Dreamers a path to citizenship and reform our visa system to ensure a reliable, legal agricultural workforce — precisely what these three bills would collectively do.

But if Congress fails to act by the end of 2022, neither border nor immigration will be solved in the foreseeable future. California Rep. Kevin McCarthy, who is the leading contender to be the next Speaker of the House, has already vowed there will be no consensus building in the next Congress for new border security coupled with a pathway for Dreamers to earn legal status.

The 11th hour has arrived for Republicans and Democrats to forge a consensus that can actually pass to restore order at our borders.

Matthew Soerens is the U.S. director of church mobilization for World Relief and the co-author of “Welcoming the Stranger: Justice, Compassion and Truth in the Immigration Debate.”