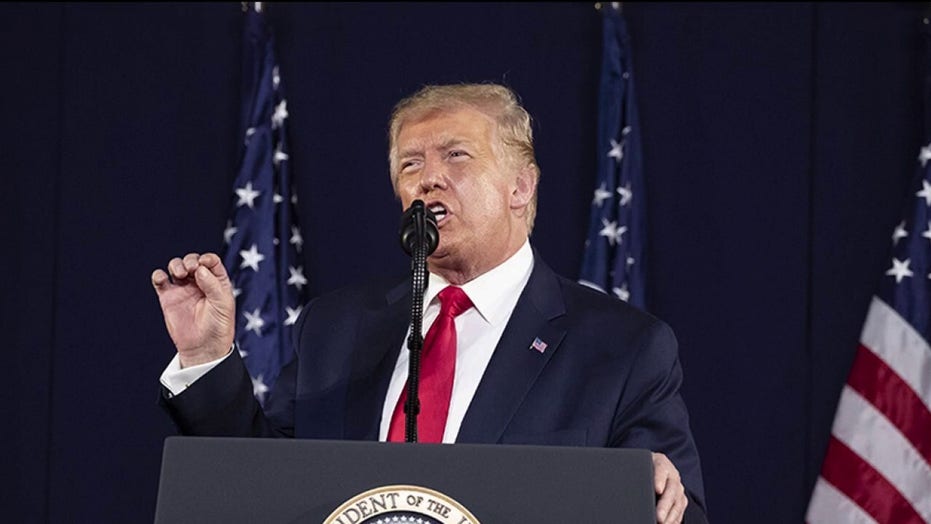 Former Vice President Joe Biden is getting help in his presidential campaign from a surprising source — President Trump.

Rather than trying to appeal to centrist voters — moderate Republicans, independents and moderate Democrats — to widen his base of support, Trump is doubling down on his most extreme positions in an effort to boost turnout by his most fervent supporters in November.

In addition to posing grave risks to the president’s reelection chances, this unconventional strategy increases the chances Democrats will capture majority control of the Senate and expand their majority in the House of Representatives.

As coronavirus infections and deaths continue to mount, Trump continues to downplay the pandemic – contributing to his receiving around 40 percent support in most national polls of the presidential race, while Biden gets around 50 percent.

News reports say that if Trump continues in his current weak position in September, Senate Majority Leader Mitch McConnell, R-Ky., will advise his members that they need to separate from Trump in order to win reelection — especially in tough campaigns facing Republican Sens. Martha McSally in Arizona, Cory Gardner in Colorado, Joni Ernst in Iowa, Susan Collins in Maine, Steve Daines in Montana, Tom Tillis in North Carolina, and possibly even David Purdue in Georgia and John Cornyn in Texas.

Trump had expected to center his reelection campaign on the strong economy and low unemployment rate that the U.S. enjoyed until spring. But the coronavirus pandemic sent the economy into a tailspin, with unemployment soaring to the highest levels since the Great Depression.

Polls suggest Trump’s strategy will result in Biden’s election in a landslide that could also give Democrats control of the Senate as well as the House.

Many voters say they disapprove of Trump’s actions regarding the pandemic including: making overly optimistic predictions, urging businesses and schools to reopen quickly, criticizing governors and mayors who want to take a go-slow approach, refusing to wear a mask, and staging campaign rallies for thousands of people with no social distancing.

In addition, Trump has strongly defended Confederate monuments and retaining names of Confederate leaders on military bases — positions even many Republicans disagree with.

And rather than emphasizing the need for racial reconciliation, the president continues to demonize people who have engaged in protests and rioting following the Memorial Day killing of George Floyd, a handcuffed Black man who died in the custody of Minneapolis police when an officer knelt on his neck for nearly nine minutes.

While these hardline positions may be pleasing to many voters in Trump’s base, the president’s base alone is not big enough to reelect him. As a result, Trump is giving Biden a wide swath of the ideological landscape to harvest — from the far left to some parts of the center-right.

November is still a long time from now in politics, but at this point polls suggest Trump’s strategy will result in Biden’s election in a landslide that could also give Democrats control of the Senate as well as the House.

The Democrats have thus far successfully made the campaign into a referendum on Trump — and Trump has fallen into the trap of giving them plenty of arguments to use against him.

Whenever an incumbent is running for reelection, voters mainly view the race as a referendum on that person. To win, incumbents typically need to focus some negative attention on their opponents. They convert the election into a choice between an imperfect incumbent (whose imperfections every voter knows) and an imperfect challenger (the devil you know vs. the devil you don’t).

In 2004, Republican President George W. Bush used the spring to successfully define his opponent — Democrat John Kerry – as a flip-flopping rich dilettante. Bush raised questions about Kerry’s Vietnam War military service, and convinced voters Kerry was too liberal for the mainstream of the country.

In 2012, Democratic President Barack Obama was able to define Mitt Romney as a flip-flopping uncaring oligarch who was fundamentally too conservative for the mainstream of the country.

Joe Biden — with almost a half-century in public life — ought to provide fertile territory for a clever campaign by the Trump team attacking the former vice president’s long record.

But Trump seems intent on enabling Biden to appeal to as many voters as possible. The president frequently makes unforced errors with tweets and off-the-cuff statements that are sometimes inaccurate, leaving his staff to scramble to do damage control.

Recent polls show just how much of a challenge a weak President Trump may pose for the Republican Senate majority. While senators may try to maintain a separate local profile from Trump, his super-attenuated ability to dominate all media means their identity is very much tied to his fortunes.

I looked at polling in all eight of the Senate races listed above. In all of them the Republican senator has the support of essentially the same percentage of voters as the president. Only Sen. Cory Gardner of Colorado is polling stronger than the president, but he’s at 39 percent compared to the president’s 37 percent in that state.

The polls suggest the focus on national issues and attitudes towards Trump make it doubly hard for a Republican Senate candidate to craft an independent campaign persona. And with the exception of Montana — where Trump continues to hold a solid lead —  it’s hard to look at the list of those eight battleground states without concluding that the Democrats have a very solid chance of winning the three or four races they need to gain control of the Senate.

The Democrats are likely to lose at least one Senate seat — in Alabama — but right now that’s the only bright spot for the GOP.

In some of these states if you just look at the margin between the Republican and the Democratic Senate candidates the Republican incumbent appears to be in slightly better shape than these numbers suggest.

In most of those states, the Democratic challenger is not that well known, there’s a large undecided vote and the Republican appears to have lead in the poll.

For example, the recent Fox News Poll in Texas showed Biden one point ahead of Trump (44 percent for Trump to 45 percent for Biden), and it showed Republican John Cornyn 10 points ahead of either potential Democratic nominee (47 to 36 percent against one and 48 to 36 percent  against the other).

Given that the Democrats haven’t even yet selected their nominee for the Senate seat from Texas, that’s a very unsafe picture for Sen. Cornyn.

But whenever one sees an incumbent candidate running in close lock-step with a weak Republican president at the top of the ticket, it’s a clear indication that the undecideds are very likely going to go to the unknown challenger come Election Day.

The bottom line: Trump’s current strategy of doubling down on appeals to his base is leaving Biden enormous room to garner strength among moderate voters in the presidential race — and making it very difficult for Republicans to hold the Senate in November.