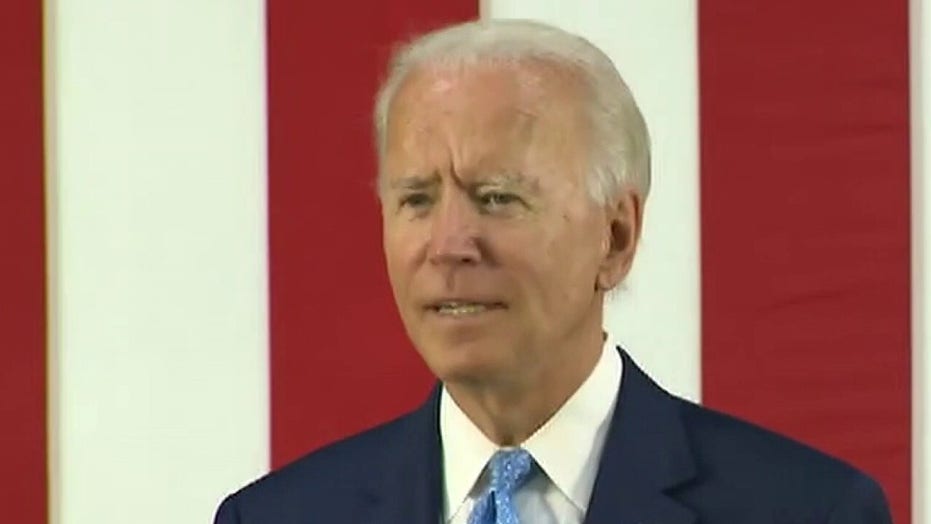 Biden began with a 20-minute speech and CNN and MSNBC carried it live. These cable news channels often refuse to air White House press briefings and try not to give free air time to President Trump – just as CNN and MSNBC refused to air 96 percent of Trump's Tulsa rally.

Then came the questions for Biden. The one that would seriously cause the president to tear out chunks of his hair came from Mike Memoli of NBC News. It can be summed up as this: You have a sizable lead. How do you keep winning?

ERIC TRUMP RIPS BIDEN AFTER FIRST PRESS CONFERENCE IN 89 DAYS: 'THE MAN HAS NO FIGHT IN HIM'

By their softball questions, the press is signaling this question: And what can we do to help?

Here's the actual verbiage. "The polls today show you with a sizable national lead, a lead in a lot of the states that are critical in the Electoral College," Memoli said. "I wonder, where do you think the race stands at this moment? What keeps you up at night as you look ahead? And can you maintain this advantage without campaigning in a traditional way, especially this fall when voters begin to really tune in?"

There is not an easier, more open-ended question to ask than "What's the state of the race?"

The elite media pretend it's preposterous that there's a vast difference between their treatment of Republicans and Democrats.

It's quite a contrast with what NBC's Peter Alexander asked at the White House. On June 19, he threw a hardball at White House press secretary Kayleigh McEnany, quoting Trump's tweets about backstabbing former aides who write "tell-all" books.

"Why does the president keep hiring people who are 'dumb as a rock,' 'overrated,' 'way over their heads,' 'wacko' and 'incompetent'?" Alexander asked.

The aggression quotient on these two questions is lion and lamb. Or rabid, man-eating lions and Lambchop the gentle puppet.

"We reported yesterday that President Trump was briefed as early as March of 2019 that Russia had ordered or offered bounties to the Taliban for the killing of U.S. soldiers,” Jaffe said. “You called his inaction on this issue a 'betrayal.' So broadly, what consequences do you think the president should face for that betrayal, and, specifically, what do you think Congress should do?"

That's the question for Biden – how should Trump be punished?

Reporters love to paint Trump as Russian President Vladimir Putin's poodle – or as a traitor.

Biden accused Trump of an "absolute dereliction of duty."

Jaffe still wanted Biden to give Trump a punishment, asking: "What consequences should he face if these allegations are true or these reports are true?" The obvious answer is defeat in November.

CNN's Arlette Saenz came up with a vague question about the racial "reckoning" that's causing statues to be ripped down and asked Biden: "What do you think when you see the removal of some of these statues?" That's better than Memoli, but she doesn't sound like Biden's own Jim Acosta.

Ed O'Keefe of CBS reminded Biden that he had boasted, "I'll confront Putin" regarding the issue of election meddling issue and asked the former vice president: "Can you tell us what you would do to Putin?"

There was absolutely zero context about how the Obama-Biden policy toward Russia for eight years compares to Trump's. Did President Barack Obama and Biden "confront" Putin back then? Didn't they obviously fail to prevent this supposedly democracy-mangling Russian interference in the 2016 presidential election?

The elite media pretend it's preposterous that there's a vast difference between their treatment of Republicans and Democrats. They need to watch this puffball press conference again.