Rep. Jeff Van Drew, D-N.J., stood by his vote against the House impeachment inquiry following the first round of public impeachment hearings last week -- but his decision to sway from his party is unrelated to President Trump, he explained.

"This has nothing to do with whether you like Donald Trump, or don't like him, or want to see him have a second term or win in an election. This has to do with the institution of impeachment itself and not misusing it."

"This has nothing to do with whether you like Donald Trump, or don't like him, or want to see him have a second term or win in an election. This has to do with the institution of impeachment itself and not misusing it," he argued.

Van Drew was one of the two House Democrats who broke ranks with party leadership in a highly contentious vote for a resolution setting the rules for the impeachment inquiry into President Trump, last month.

The resolution passed 232-196, but lacked votes from Reps. Jeff Van Drew, D-N.J., who has long expressed skepticism about impeachment, and Collin Peterson, D-Minn, whose district Trump won by 31 points.

"At the end of the day we’ll have the same president and same candidate and a failed impeachment process, and the only difference would be that the president will have been exonerated of charges," Van Drew said in a statement to Fox News at the time.

Discussing his decision on the Fox Nation show over the weekend, Van Drew cited a piece on the topic written by French political thinker and historian Alexis De Tocqueville more than 150 years ago. 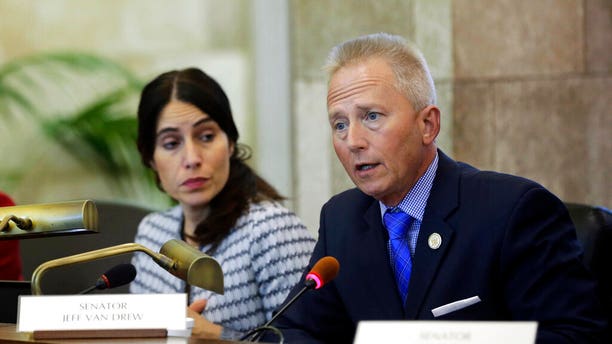 In this Thursday, Jan. 14, 2016, file photo, former state Sen. Jeff Van Drew, D-Cape May Court House, speaks at a Senate Budget and Appropriations Committee meeting in Trenton, N.J. Van Drew, now a freshman Democratic Congressman, was one of two Democrats to vote against the House resolution setting rules for the impeachment inquiry into President Trump on Tuesday. (Associated Press.)

"You know, De Tocqueville in 1853 wrote that if a nation was more and more often using...impeachment as a way of actually removing its leaders, it would show the deterioration of the nation," Van Drew said.

"It is so rarely used, should be rarely used. And as I've mentioned to you before, it is something that during the hundreds of years of American history has never been successfully used," he added.

Comparing the impeachment of a president to "more like something you would see in Europe or third-world nations,"  Van Drew encouraged House Speaker Nancy Pelosi to shift her focus to "real issues" for the remaining 14 working days in Congress before year's end.

"What we could do...there are three or four major issues where the president, the speaker, the Senate all agree on...USMCA -- we can really get that done. Other issues as well that they agree on... infrastructure. We could get that done," Van Drew said.

"So wouldn't it be wonderful at the end of this presidency, to the benefit of both political parties, but most of all, to the benefit of Americans, if we actually got some of these very important issues finished and taken care of instead? It will not happen in this toxic atmosphere," he added.

Host Maria Bartiromo agreed that the "impeachment inquiry seems to be taking all the oxygen out of the room," and questioned whether it would require additional days in session beyond the 14 days left to the year.

"That's part of the problem, and there's going to be a big push to at least try to get a few bills through the House..and that's good," Van Drew said, "but to me, if we can create at least an atmosphere concerning these three or four issues where we can all work together, obviously, including the Senate and the president, that would be amazingly wonderful way to end what's been a very, very difficult few years."

Other Democrats share Van Drew's concern that the impeachment inquiry is distracting Congress from focusing on important issues affecting the country, he claimed, but it boils down to the final vote.

TRUMP SAID HE WILL' STRONGLY CONSIDER' PELOSI INVITE TO TESTIFY

"I don't know how they're going to vote on impeachment, and that's going to fascinate me as well, because some folks sort of change their mind a little bit during the... inquiry process. What I do know is there are many good moderate Democrats that truly want to get things done that do want to be bipartisan," he said.

"I'm not there just to have a good time," Van Drew added, "because frankly, it isn't that much of a good time. So, you know, I'm there because we need to get things done. We have a job. We need to do it -- whether we always like each other or not, whether we're the same party or not, whether we agree on everything or not. That's the deal, that's what we need to do. And there are people who want to do that...and I hope that we finally do."

To watch all of Maria's interview with Rep.Van Drew, join Fox Nation and watch the latest episode of "Maria Bartiromo's Insiders" today.