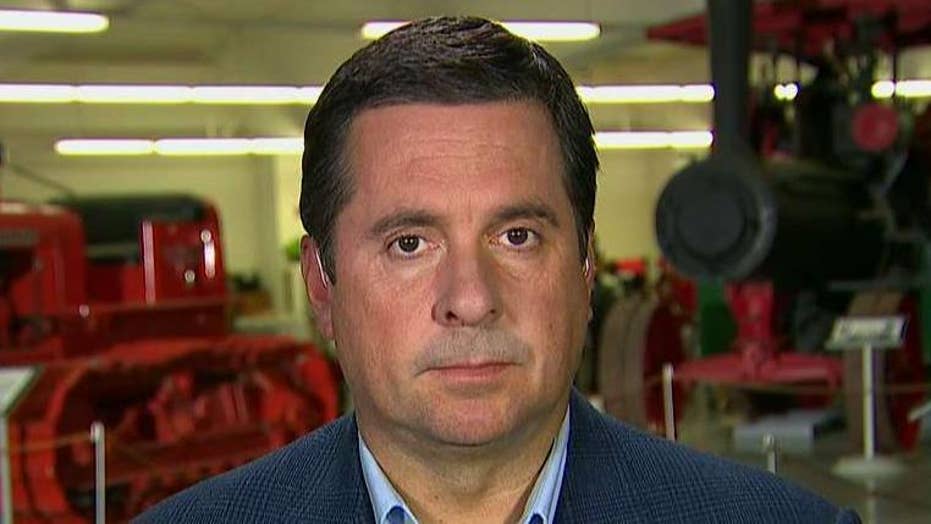 Nunes: Democrats are racing to get impeachment inquiry done

Rep. Devin Nunes, R-Calif., said Wednesday that he intends to ask the State Department for more information about “strange” and “irregular” requests allegedly made by ousted U.S. Ambassador to Ukraine Marie Yovanovitch to monitor the communications of U.S. journalists in the country.

DEVIN NUNES SLAMS DEMS' IMPEACHMENT INQUIRY AS 'NOT REAL': 'IT'S A PARTISAN ADVENTURE'

Nunes, the top Republican on the House Intelligence Committee, said on Fox News' "Hannity"  that he’s looking to ask Yovanovitch during her scheduled testimony Friday about her alleged efforts to monitor reporters.

Yovanovitch, who was appointed ambassador to Ukraine by former President Barack Obama in 2016, and recalled by the State Department in May of this year, is scheduled to give a deposition as part of the Democratic-led impeachment inquiry against President Trump. She remains a State Department employee, and it's unclear whether the administration will attempt to block her appearance.

"What I've heard — and I want to be clear — there's a difference. What I've heard is that there were strange requests, irregular requests to monitor not just one journalist, but multiple journalists,” Nunes told host Sean Hannity. “Now perhaps that was OK. Perhaps there was some reason for that — that it can be explained away. But that's what we know and that's what we're going to be looking into."

Hannity said multiple sources have told him they "believe there is evidence that government resources were used to monitor communications" of U.S. journalists and that Yovanovitch may have been involved. Nunes noted that if the State Department had conducted surveillance over press activity in the Ukraine, it may have been done properly.

"We also have concerns that possibly they were monitoring press from different journalists and others," Nunes continued. "That we don't know, but we have people who are giving us this information and we're going to ask these questions to the State Department and hopefully they're going to get the answers before she comes in on Friday."

John Solomon, who recently became a Fox News contributor, also said on “Hannity” Wednesday: "I think we need to dig in more. Ambassador Yovanovitch should be given an opportunity and Secretary of State Pompeo should tell us what happened."

Solomon is an investigative reporter who has made headlines for breaking stories related to the ongoing Ukraine controversy that have fueled Trump's support for Attorney General William Barr's review of the origins of Special Counsel Robert Mueller's investigation into Russian interference in the 2016 presidential election.