After being called out by multiple outlets after not taking questions Thursday about allegations a city official was fired for raising concerns about conditions for migrants arriving in the Big Apple, Democratic New York City Mayor Eric Adams finally addressed the issue in a radio interview Friday.

Julie Savel, the deputy commissioner of press and communications at the city's Department of Social Services, thought she was dismissed because she spoke out about migrants sleeping overnight at the city's Prevention Assistance and Temporary Housing intake center, which would violate the city's right-to-shelter law, according to a report from NBC4, a New York affiliate.

"Email and text messages provided to the News 4 I-Team suggest that the Deputy Commissioner for Public Information Julia Savel had resisted efforts by Social Services Commissioner Gary Jenkins to conceal crowded conditions in the city's homeless shelter system from his superiors at City Hall, from the media and from the public," NBC4 reported.

Jenkins claimed he was unaware it was illegal to keep families in the intake office, and Adams said he was not made immediately aware of the violations of the right-to-shelter law. NBC4 cited sources telling the outlet that staff at the Department of Social Services were upset that they couldn't promptly alert City Hall that migrants were being housed improperly.

Adams later said Savel was not fired for acting as a whistleblower, but it's unclear why she was fired if that is accurate.

Adams spokesman Fabien Levy said the mayor didn't have time to take questions about the accusations at a press conference on Thursday. New York Times reporter Dana Rubinstein called Adams out on Twitter on Friday, noting Adams was doing some interviews that morning, a day after he invited reporters to a Q&A and then announced he wouldn't take questions.

"It's also worth noting that neither Channel 4, which broke the Gary Jenkins whisteblower story, nor NYT, which broke the Timothy Pearson story, were offered interviews this morning," she wrote; the latter story concerns an Adams confidant who is being paid as one of his senior advisers while maintaining an executive casino job in Queens.

Levy fired back to Rubenstein, tweeting, "WNBC only has a live broadcast before 7 AM. The mayor had time for interviews in the 7 & 8 AM hours. NBC natl was offered an interview & they chose not to take the mayor. Would assume these stories would be asked about on natl TV. No?"

Adams did address the issue on Friday in a radio interview, telling 880 AM that he stood by Jenkins' staffing decisions and the firing of Savel was a "private personnel" issue. He added he was proud of that department's work.

Adams also appeared on CNN on Friday, but "New Day" co-host Brianna Keilar didn't bring up the sleeping situation, focusing instead on the war of words between Adams and Republican Texas Gov. Greg Abbott over Texas sending migrants to the Big Apple. 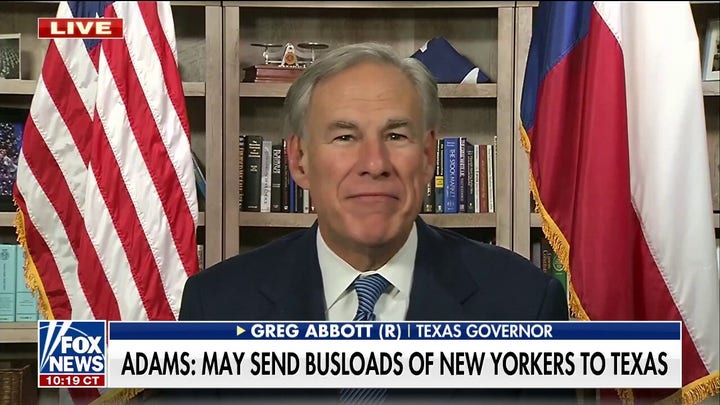 Keilar played a short clip of Abbott in a recent Fox News interview, where he said, "I kind of feel like Clint Eastwood. Go ahead, Mayor. Make my day." While Keilar didn't note it in the introduction, the remark by Abbott was in response to Adams saying he might take a busload of New Yorkers to Texas to campaign door-to-door against his re-election bid.

"Well, first of all, it's unfortunate he believes this is a Hollywood script, and it's not. It is lives of human beings, and to watch a governor lack coordination and show the humanitarian aspects of our country, placing people on a bus, without adequate water, without adequate food, sending them to cities and in many cases they don’t understand the language, that is just not who we are as Americans," Adams said. "I don’t want to make his day. I want him to make the day of those he is treating in this inhumanitarian fashion."