Kevin McCarthy: Adam Schiff is a 'liar,' Democrats 'hate everything' about Republicans

Appearing on "Hannity" with host Sean Hannity, McCarthy blasted the leader of the impeachment probe against President Trump and said he should be held accountable for his actions.

"Well, first I'd say Sean, there’s one person you have to add to the 'lying list,' and that’s Adam Schiff," he told Hannity.

"He lied to us about not knowing who the whistleblower was, he lied to us by using that committee to actually tell us that the Foreign Intelligence Surveillance Act (FISA) court was OK, and then he lied to us one more time when he read the transcript that was not true," McCarthy charged.

In April of 2019, Schiff told MSNBC -- without proof -- that there was "ample evidence of collusion" between the president and his administration with Russian agents.

Former Special Counsel Robert Mueller had announced to the public that he did not find that the Trump campaign or anyone associated with it conspired or coordinated with the Russian government, but left the question of obstruction open-ended. 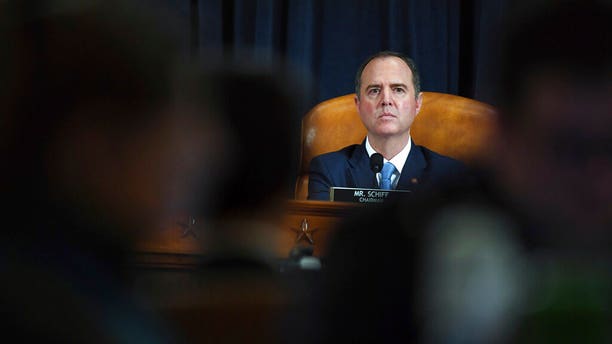 Additionally, during the House impeachment hearings in September, Schiff came under fire for reading his own "parody" version of President Trump’s July 2019 phone call with Ukrainian President Volodymyr Zelensky without noting he'd made it all up. Schiff later chalked his fictional summary of the controversial phone call to a joke.

Despite accusations from across the aisle, Schiff has also denied knowing the identity of the Trump whistleblower -- the source of the impeachment inquiry -- during the president's Senate trial in January and claimed that no one from the House Intelligence Committee was ever involved in coaching them.

Schiff called rumors of his behind-the-scenes involvement a "conspiracy theory" and said he wouldn't elaborate further, for fear of revealing sensitive information.

In a letter obtained by Fox News, Reps. Devin Nunes, R-Calif., and Chris Stewart, R-Utah, the ranking members of the committee and subcommittee, respectively, joined GOP colleagues in criticizing Schiff for not holding hearings on FISA in the wake of Inspector General Michael Horowitz's report.

In the long-awaited investigation, Horowitz found that the FBI made repeated errors and misrepresentations before the Foreign Intelligence Surveillance Court as the FBI sought to monitor Trump campaign adviser Carter Page in 2016 and 2017.

Lastly, on Wednesday Schiff told reporters that the DOJ and Attorney General William Barr's conduct in revising and shortening an original sentence in former Trump adviser Roger Stone's criminal case -- prompting the withdrawal of four DOJ career prosecutors -- is "an egregious violation of the rule of law."

Democrats called for Barr to resign -- and did not rule out another impeachment -- after the president reacted to the revision on Twitter this week, prompting Barr to tell ABC News on Thursday that his running commentary "make[s] it impossible for [him] to do [his] job."

Sean Hannity used his opening monologue Thursday to break down the ongoing drama involving Stone, issuing an "important warning" to viewers about the "unequal" justice system prosecuting the high-profile case.

"Please listen closely. You've got to understand right now if you are a conservative, if you are a Republican in the United States of America, you have every, every single right to feel that you are not being treated fairly, that the justice issued in this country is not equally applied," he said.

"The only thing these people are guilty of that had to go to jail," McCarthy added referencing Stone's case, "they’re guilty of the same thing you and I are guilty of, that we support our president," he told the primetime host.

"That is what the Democrats only look at because they don’t just hate the president, they hate you, they hate me, they hate the viewers, they hate everything about us," he concluded.