Fox News political analyst and author Gianno Caldwell revealed that his career choices are not winning him any friends in some corners of the African-American community.

"I was in a Hollywood party and I went up to a very famous comedian, tried to shake her hand," Caldwell told Judge Andrew Napolitano on Fox Nation's "Liberty File" on Friday. "She said, 'I know who you are. You're that Republican for Fox News.'"

"You know who that was? Tiffany Haddish," he revealed,

Haddish, whose career was launched by the 2017 movie "Girls Trip," is an outspoken critic of President Donald Trump and once canceled a performance in Georgia in protest over a controversial abortion law.

The 39-year-old comedian has also spoken publicly about her struggles with homelessness and growing up in an abusive household. 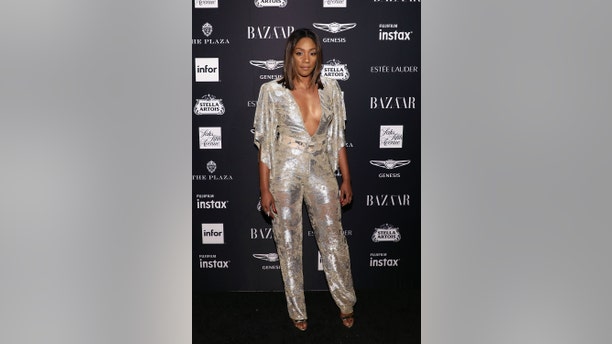 In the Fox Nation documentary, "The New Battle for Chicago" and in his new book, "Taken for Granted: How Conservatism Can Win Back the Americans That Liberalism Failed," Caldwell detailed his difficult childhood growing up in Chicago. He told Judge Nap how that experience shaped his belief that liberal, Democratic policies are hurting inner-city Americans.

"I grew up extremely poor -- lights, gas, and water off at the same time. Mom addicted to crack cocaine," he said on Fox Nation.

"One day I was riding through the city of Chicago with my grandfather through an area of Chicago called Inglewood -- hardest-hit area in terms of the gangs, drugs and violence," he recalled. "[I] see this lady who looks drugged up and beat down. And I knew it was my mother. I began to tear up and my grandfather saw me."

"At that point, I realized it wasn't my mother, but it could have been," Caldwell continued. "And [my grandfather] said, 'What's wrong with you, boy?' in his very southern voice. And I say, 'This lady, what can I do to prevent this from happening?' And he tells me about the elected officials, the power they have to implement laws that can control what the gangs are doing in terms of selling drugs and they can provide grant funding. So the very next week, I start to volunteer from my local alderman."

Caldwell said that he came to believe that the city leaders were more interested in maintaining political control of the African-American community than in improving their quality of life.

"In that time of getting into politics, I saw what the liberals were doing. I lived in a community that was generations of welfare," he argued. "It's a system of control, not freedom, one where they want you to stay on welfare -- not so you can raise yourself out of it, but they can control you.  And in the next year, they can come back with a new government assistance program which never gives you the economic freedom to live a life better for yourself."

To watch all of "Liberty File with Judge Andrew Napolitano" and "The New Battle for Chicago" go to Fox Nation and sign up today.