While he was never referenced by name, Trump was aided by the Joker and Superman archnemesis Darkseid in Frank Miller's "Dark Knight Returns: The Golden Child," where he was seeking reelection as governor instead of the president. Trump's likeliness was featured on campaign posters and merchandise, including red hats and a Trump puppet that the Joker holds.

As The Hollywood Reporter noted, Darkseid recruited the Joker to join the political campaign as an "agent of chaos" with the ambition to "destroy humanity's faith in itself" in order to conquer the world. In the comic, Joker apparently was overseeing the campaign's digital team, made up of Joker-looking child "minions."

'STAR WARS' ACTRESS DAISY RIDLEY: 'EVERY SANE PERSON' HAS AN ISSUE WITH TRUMP

In one image, Joker was seen wearing an American-flag-themed coat with writing on the back that read, "I really don't care, do U?" a reference to the iconic coat Melania Trump wore in 2018 leaving the White House to visit the Mexico border. 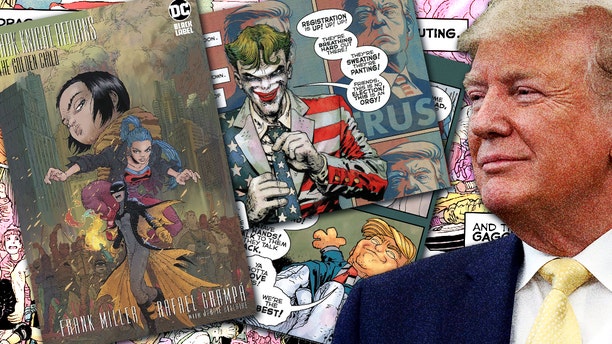 One image in the comic showed the Joker wearing a jacket with the colors of the American flag.

Another image showed several child-drawn pictures featuring Trump in various scenarios including building a wall and standing on an airplane while throwing away cash.

Batwoman, the hero, was seen battling Joker-looking thugs and was aided by Batman-masked protestors as the mobs collided.