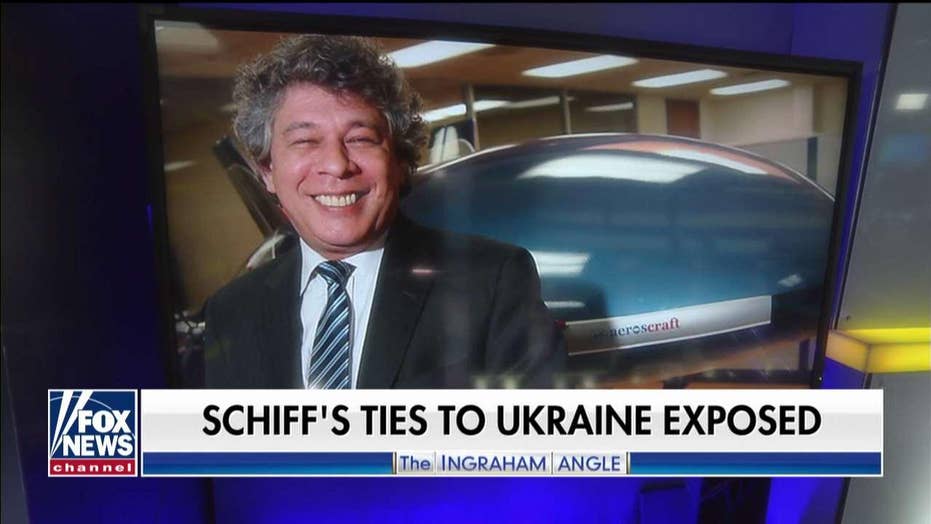 What are Rep. Adam Schiff's ties to Ukraine and why is no one talking about it?&nbsp;

Fox News host Laura Ingraham did a deep dive into Rep. Adam Schiff's, D-Calif., connections to Ukraine on Tuesday's episode of "The Ingraham Angle," and asked why these revelations were ignored by other news outlets.

Ingraham said it was discovered that Schiff had close ties to a Ukranian arms dealer who moved his corporation into the lawmaker's California district. The arms dealer then held a fundraiser for the House Intelligence Committee chairman, which could suggest a quid pro quo situation between them, as Schiff traded political capital for campaign cash.

"Here’s something no one in the media is covering -- Adam Schiff’s ties to Ukraine. How deep do they go?" she asked.

"First, I want you all to meet Soviet-born arms dealer Igor Pasternak... the founder and CEO of worldwide arrows corporation. Pasternak grew up in the Ukraine, but some 25 years ago, his company moved to a location near Schiff’s district in southern California.

"Since that time, Pasternak continued to receive lucrative surveillance and weapons deals from Ukraine’s government. Here's where Schiff enters the picture -- in 2013, Pasternak hosted a fund-raiser for Schiff. No big deal, right? That's until you realize how Adam Schiff’s priorities completely shifted.

"Now before this time, Schiff rarely, if ever, mentioned Ukraine. But after the fundraiser, he used multiple television appearances to basically demand that we send money and arms to them."

Ingraham went on to question why the press has ignored these allegedly glaring connections while doggedly chasing Trump's possible ties.

"Why isn’t anyone asking more questions about Schiff’s place at the center of the left’s new Ukraine hysteria?" she asked.

"I went back and I looked at some of the liberals who were writing about Schiff and this guy, Pasternak, who did some fundraisers for him. Nothing illegal about doing fundraisers for him, but liberals were kind of concerned that someone like Schiff would be going after -- would be the one they choose to go after Trump."

She also claimed Democrats were concerned about the optics of a double standard when Schiff became one of the standard-bearers for impeachment.

"The liberals weren’t all that wild about the idea of this Schiff character pushing the Trump narrative, because they thought, he’s kind of a pro-military expenditure, ra-ra, get more money over to these other governments. They weren’t thrilled about that," Ingraham said.