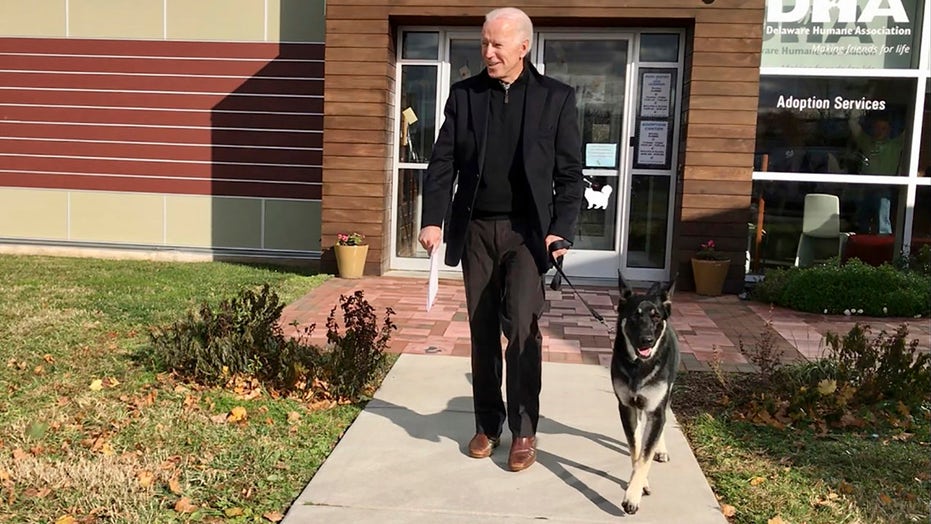 President Biden’s two German shepherds, Champ and Major, were moved to the Biden’s family home in Delaware earlier this week after Major reportedly bit a member of the White House security team, according to recent reports.

Major, who was adopted by the Bidens from the Delaware Humane Association in 2018, is the first rescue dog to be in the White House.

He has also reportedly been known to bark and lunge at White House staff and security, CNN and TMZ reported.

However, that behavior is not typical of the German shepherd breed, Brandi Hunter, the American Kennel Club’s vice president of communications, told Fox News.

"It just sounds like Major needs a bit more socialization and training because he’s in a newer environment," Hunter said. "He’s probably a very good boy who just needs a bit more training to adjust to his situation."

Hunter said German shepherds can be used as working dogs and police dogs and are known to be fearless – but not aggressive.

"They’re direct, they’re fearless – but they’re also very loyal to their family," Hunter said. "They can be very affable. They’re not necessarily like the kind of dog that’s just going to run up to anybody, but they do have a definite confidence. They’re not naturally an aggressive breed or anything like that."

According to the American Kennel Club website, German shepherds are herding dogs that are best known for their "intelligence, agility, speed, stealth and the overall air of firm authority," which makes them a great breed for police and military dogs.

They are also able to "learn commands for many tasks" and are willing to put themselves at risk to help someone they love, the website says, adding that German shepherds "will be gentle family pets and steadfast guardians."

Hunter said Major’s behavior is a sign he’s probably just adjusting to having a lot of new people around – including people who may not know how to interact with a dog.

"It’s just a change in their environment," Hunter said. "Dogs are very good with routine."

"It just requires a little more training, a little extra love and [Major] should be just fine," she added.

Champ and Major’s former trainer agreed with Hunter’s assessment. Mark Tobin told TMZ that the incident was caused by the shock of moving to the White House from the Bidens’ "quiet home" in Delaware.

Major isn’t the only first dog to bite someone. In 2008, President George W. Bush’s Scottish terrier Barney bit a Reuters reporter who tried to pet the dog, the Associated Press reported at the time.

According to the report, the incident happened near the end of Bush’s presidency.

Though Champ wasn’t reported to have the same behavioral issues that Major reportedly had, Champ was also moved to the Bidens’ Delaware home. Champ, a 13-year-old German shepherd, was adopted by the Bidens in 2008.