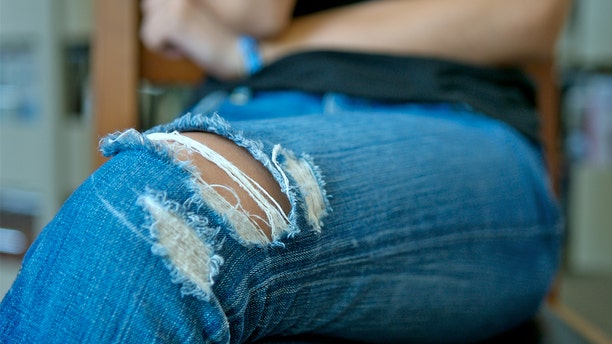 A Florida mom slammed her daughter's high school for the sexist reasoning behind her dress code violation. (iStock)

A Florida mom whose daughter was suspended for wearing ripped jeans is calling out the high school for its sexist reasoning.

“In the middle of a quiz in her IB History class, a male administrator came to classroom, told her she needed to consider the guys in her class and their hormones when choosing her wardrobe, yanked her out of class and threw her into In School Suspension for the remainder of the day. So she missed an entire day of core classes and couldn’t finish her quiz,” McKinlay wrote.

AMERICAN TOURIST IN BAHAMAS BITTEN BY SHARK WHILE SPEARFISHING

While the mom admits her daughter did indeed violate the school dress code, which states “clothing should be intact (without holes, rips, or frays),” she argues that the reason her daughter was given was a prime example of “sexism,” “victim blaming” and “girl shaming.”

“Perhaps she should have worn a different pair of jeans. But why should she have to worry about dressing a certain way to curtail a boy’s potential behavior? So, like, it’s her fault if the boy touches her because of what she was wearing? A boy’s potential inability to control his hormones warrants my daughter’s inability to attend her classes today and miss valuable curriculum?” she wrote.

McKinlay also called for the administrator allegedly responsible for talking to her daughter to be suspended.

Forest Hill High School Principal Mary Stratos told the Palm Beach Post Thursday that she was unfamiliar with the incident, but she would be investigating the school official’s alleged comments to McKinlay’s daughter.

She also defended the school’s dress code as gender-neutral, saying it is enforced equally for both boys and girls, and that any tear in the clothing is a violation, regardless of location.

“We don’t need to be the tatter police,” she said.

In an update posted to Facebook on Friday, McKinlay said she had spoken with Stratos, whom she called wonderful, along with members of the school board and is “confident they are addressing the situation.”

“Many thanks to the principal and school board for being so responsive. Palm Beach County is lucky to have such good leaders in our schools,” she wrote.

She also further reiterated why the alleged comments made to her daughter angered her. “As a strong advocate for women, and particularly survivors of sexual assault, the message that somehow a woman's wardrobe is responsible for a man's behavior is wrong. In any form. And I am hopeful this will be used as an opportunity to provide further sensitivity training to staff and students,” McKinlay wrote.