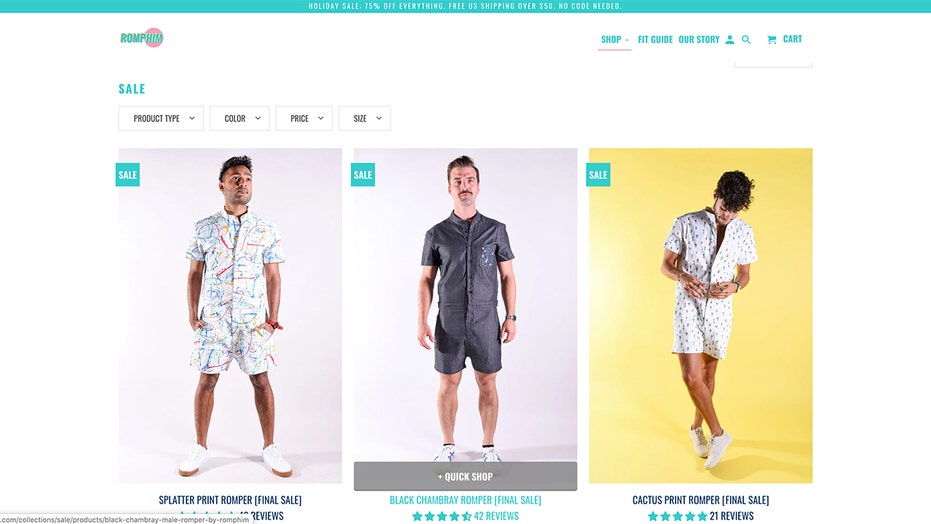 It was fun while it lasted.

RompHim, the fashion company that went viral for its male-marketed one-piece garments, has announced that it has closed shop.

“The time has come to close the door on RompHim,” the company co-founders said in a statement.

MALE ONESIES DEBUT ON E-COMMERCE SITE, PROMPT MOCKERY: 'WHO ASKED FOR THIS?'

RompHim made waves in 2017 when the then-Northwestern business students launched a Kickstarter for their colorful and creatively-printed male rompers. The crowdsourcing campaign raised $350,000 for the fashion line, which included RompSuits for cold weather.

On their Instagram Story, RompHim thanked their customers – which they called the “Romp Squad”— “for being an integral part of [the] journey to push fashion boundaries,” according to the New York Post.

While some critics mocked the unconventional style for being what they considered a less-than-manly fashion choice, it was a hit with many men including the Los Angeles Rams and the cast of Bravo’s “Summer House.”

PREGNANT MODEL QUIZZED ON HOW SHE USES BATHROOM IN SKINTIGHT BODYSUIT

RompHim’s popularity continued to grow thanks to its bro-like marketing ads like models rocking their rompers at baseball games, chugging beer and playing pool. The menswear line was also popular with the LGBTQ community.

But for diehard fans who can’t stand to see their favorite menswear line go, they can at least be comforted in knowing that male rompers are also available for sale by other fashion brands like ASOS and RomperJack.

Male one-piece garments are apparently on the rise, evidenced by adult male onesies that were being sold on the e-commerce site Wish.com.

The unique fashion item, traditionally worn by toddlers, was being sold last month by multiple vendors on the site, which features male models rocking crotch-hugging onesies.

One of the onesies sold by the seller BoutiqueMarket was described as a “Pressed Crotch Baseball Themed Bodysuit Romper Pajamas.”

The item even came with a five-star review. “Fits nicely, quality surpasses what I expected,” one happy buyer wrote in the product’s customer reviews section.