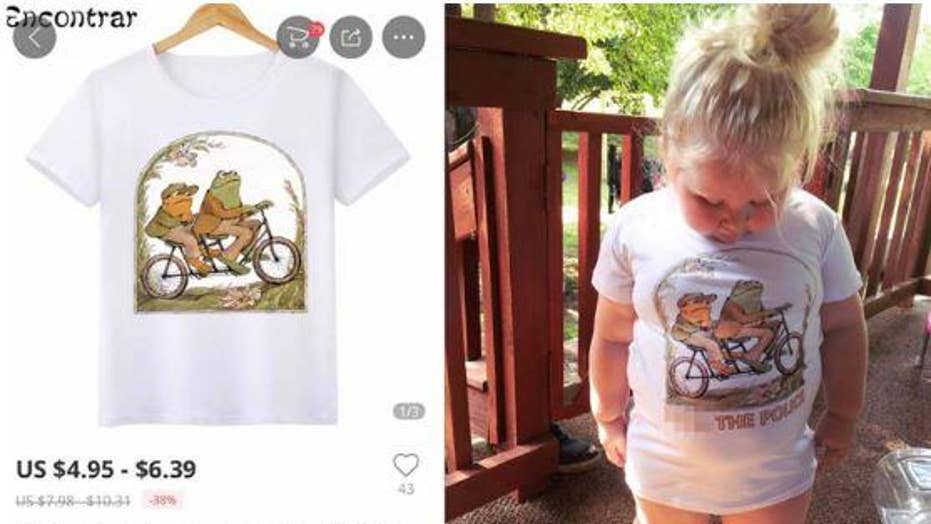 At first, she and her husband found it funny after discovering offensive language on their child’s T-shirt. Posting about the ordeal generated thousands of likes, but some observers did not take the couple’s laughter lightly. Instead, they targeted the young child.

Frequent online shoppers know that purchases don’t always turn out as expected, but one Illinois woman was shocked to find the t-shirt she bought for her young daughter read “f--- the police.”

Earlier this week, Kelsey Dawn Williamson was stunned to see the offensive phrase on an otherwise innocent white "Frog and Toad" shirt she bought for her daughter Salem, 3.

The Benton woman ordered the top from the China-based retailer AliExpress.com, which she frequently shops for her child without issue, BuzzFeed News reports.

"Salem probably has 50-plus different little boutique outfits from my favorite store on AliExpress," Williamson told the outlet.

Therefore, the mom expected nothing different when she purchased the “Kids Two Frog Riding Design Baby Boys/Girl TShirt Kids Funny Short Sleeve Tops Children Cute T-Shirt,” earlier this month. According to BuzzFeed, the top, which features the characters from the beloved children’s book series riding a bicycle, retails for about $5.

Opening the package on Tuesday, Williamson said she “froze” at the discovery, Kidspot reports.

As Williamson couldn’t help but laugh at the fashion fail, she also shared the story and photos of Salem in the top on her Facebook page, where it has since gone viral. (AliExpress.com / Kelsey Dawn Williamso)

"I literally did not know how to react so I just took a few moments to stare at it and try to process," the parent told BuzzFeed. "Of all the things they could have added, why that? On a children’s-size shirt?" she asked, referring to the illicit phrase, which is a lyric in a popular N.W.A. song from the 80s.

Calling her husband to share the news, the couple “lost it” with laughter and "just screamed together."

As Williamson couldn’t help but laugh at the fashion fail, she also shared the story and photos of Salem in the top on her Facebook page, where it has since gone viral with over 62,000 likes and 30,000 shares – a consequence Williamson said she never would have predicted.

“I originally just shared the t-shirt with only my friends until one of them wanted to share it to their profile, so I made it public,” she told Kidspot. “I definitely wasn’t expecting it to go this far. It all happened so fast.”

“Salem can’t read, so she had no idea what was going on,” the mom added.

The controversial top, as sold by Amazon, pictured, without the unbelievable phrase Kelsey Dawn Williamson found on a child's t-shirt for her young daughter. (Amazon.com)

Unfortunately, Williamson reported that she has been berated online by nasty commenters, who blasted her for putting her daughter in the top and mocked the little girl’s weight.

“Salem is 3 and can’t read. I did not buy this. This is what I was sent,” she clarified in an edited Facebook post. “No, she won’t wear it in public.”

Williamson continued to state that her daughter “sees specialists for her weight” and that neither she nor her husband is to blame as the matter is “out of our control.”

“Just laugh at the funny shirt,” she concluded.

“It’s been so ridiculous,” Williamson told Kidspot of the negative attention. “The tears were flowing last night. I almost even deleted it, I just wanted it to stop.”

“I still see mean comments occasionally but it’s gotten easier to just ignore it,” she dished. “But nothing will stop me from putting the shirt straight [into] Salem's baby box with all of her other important items!”