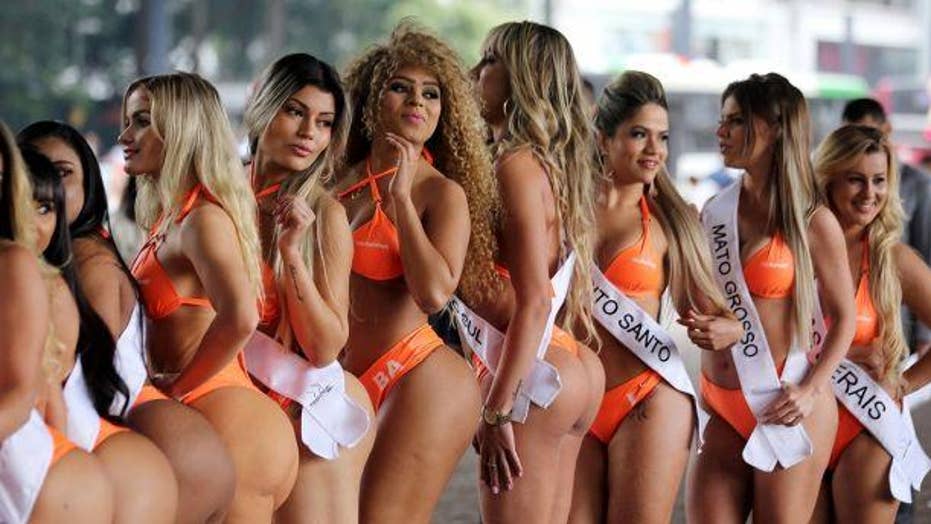 Brazil’s infamous Miss Bumbum pageant will include transgender contestants but some fellow participants are not too pleased.

A bitter Miss Bumbum contestant is being fined $30,000 after getting into a catfight on stage and stealing the winner’s sash.

Now the pageant’s organizers claim that Uva — who calls herself Miss Bumbum on social media — has refused to give the sash back to official winner Santana.

The Miss Bumbum team says it has sent the sore loser a final warning, giving her five days to return the sash and pay a fine of around $30,000 for damaging the image of the competition and breaking her contract.

An angry Uva, a masseuse from northern Brazil, was caught on camera storming the stage during the coronation of the new Miss Bumbum in November.

After a tug-of-war, she put the sash on herself and declared that her 41-inch butt was the true winner.

In tears, she said Santana’s behind is “plastic,” while she works out every day for her curves.

“I’m the only woman who deserves this title,” she told the audience.

Earlier in the competition, all 27 models, who come from each of Brazil’s states, had to prove their bums were real by providing X-rays.

But Uva mysteriously insisted: “Miss Bumbum is a farce. I can prove all this.”

Despite the pulling and shoving, Santana regained her composure quickly and danced around with the Brazilian flag instead, saying, “My butt is by far the firmest.”

The legal letter from the Miss Bumbum team claims Uva broke her contract and put in doubt the credibility of the contest, which has become immensely popular around the world since its inception eight years ago.

An angry Uva, a masseuse from northern Brazil, was caught on camera storming the stage during the coronation of the new Miss Bumbum in November. (Splash News)

They say that if Uva does not comply with their demands, they will file a lawsuit against her in Sao Paulo, Brazil.

Founder Cacau Oliver said: “What happened was absolutely unacceptable and I will take this action all the way. There were irreparable damages to the contest.”

Santana added: “She literally attacked me and took the sash by force, I was left frozen at the time and did not know what to do, it was like an assault.”

Uva claims she has never received any demands and angrily dubbed the allegations “lies.”

Despite the contest’s dramatic climax, both women appear to be doing well — Santana looks set to become famous around the world with the Miss Bumbum title, and Uva has been telling fans she has landed the cover of one of Brazil’s biggest men’s magazines.

The televised competition has 27 contestants who represent the country’s different states, with 15 women making it to the finals. (Splash News)

The Miss Bumbum competition has been held annually in Brazil since 2011 and aims to crown the best buttocks in the land.

The televised competition has 27 contestants who represent the country’s different states, with 15 women making it to the finals.

Contestants have to have a minimum butt size of 40 inches, and the winner receives 50,000 Brazilian reals (about $12,900) in endorsement deals and instantly becomes a celebrity in the country.

This year’s competition saw the inclusion of two trans women for the first time, although rivals of one — Paula Oliveira, 27 — tried to get her booted out of the contest because she was born a man.