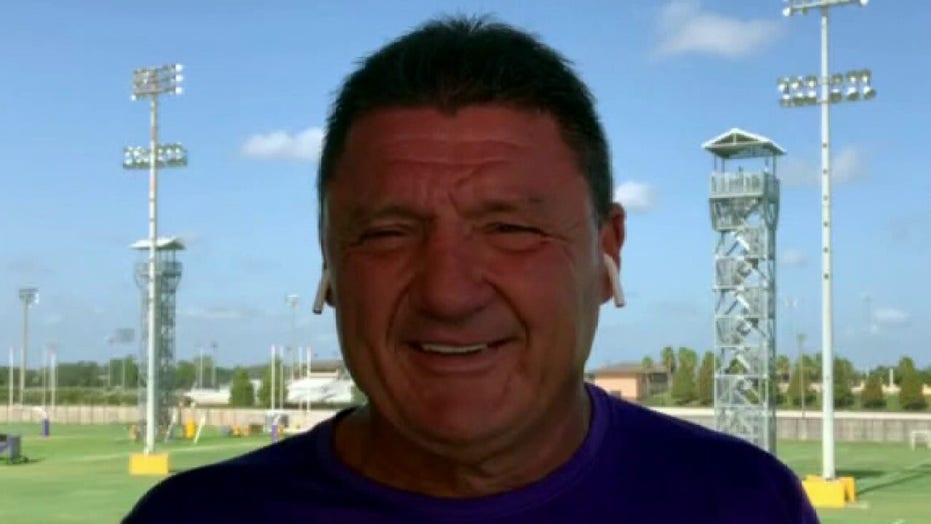 LSU's Ed Orgeron: Our players want to play and win

Soon-to-be LSU Tigers running back Corey Kiner surprised his high school janitor by giving him a special shout out in an award acceptance speech and gifting him his #22 jersey.

Kiner, the Cincinnati-based Roger Bacon High School senior who was named the top high school football player in the state of Ohio, thanked his school’s custodian, Jeff Rapking, for the impact he’s had on his sports career while receiving the Mr. Football award.

Rapking, who is intellectually disabled and has worked at the school for 35 years, is beloved by all at the Cincinnati high school for being one of the biggest football fans. Kiner says Rapking is always cheering for the team on the sidelines at every game, win or lose.

PACKERS GIVE BACK TO POLICE DEPARTMENT IN A BIG WAY

To show his gratitude for the spirited staff member, Kiner had a T-shirt made with Rapking’s name on it, along with the high school’s logo and the signatures of all of Roger Bacon’s football players. He also said he'd give his #22 Jersey to Rapking.

"Jeff puts a smile on my face," said Kiner. "To be able to put a smile on his face meant the world to me," he said.

Kiner committed to the Tigers in March.