A mock crime scene intended as a Halloween display at an Atlanta-area district attorney’s office has been blasted as "insensitive," though some on social media have argued that the presentation was simply a nod to the spirit of the holiday.

During a recent visit to the Paulding District Attorney's Office in Dallas, Ga., Lauri Newsome was shocked to find the display in the DA's office lobby. The decorations featured a skeleton lying on the ground surrounded by yellow tape, as if it had been murdered.

“Not the most sensitive Halloween display, considering the location, if indeed there IS such a thing,” Newsome wrote on Oct. 15.

In the comments on her post, Newsome claimed that when she asked the receptionist about the “insensitive” display, the employee told her, “We handle very sensitive cases and sometimes we need to let loose and laugh.”

“They still don’t seem to get that when the public is in the DAs office, it means something bad happened in their life, or the life of their child or the lives of their child and their grandchildren, and they probably won’t enjoy Halloween humor,” Newsome alleged.

"That's just not something you want to see when you're a victim or family of a victim," the woman told the outlet of being startled by the faux crime scene. "It was just absolutely poor judgment on their part to do something like that." 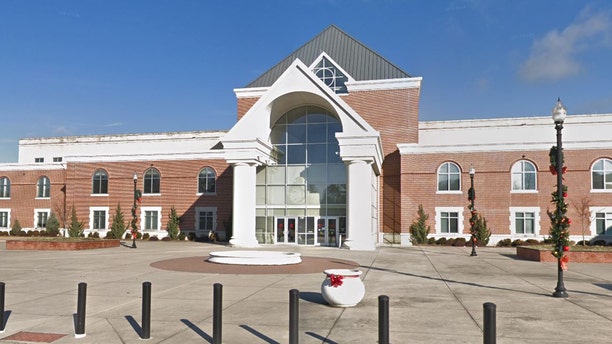 A mock crime scene intended as a Halloween display at an Atlanta-area district attorney’s office has been blasted as “insensitive,” though some social media commenters have argued that the presentation was simply a festive nod to the spirit of the holiday. (Google Maps)

Edward Queen of Emory University's Center for Ethics echoed similar sentiments, describing the Halloween display as unprofessional and unethical to be presented in the legal office.

“It’s going to suggest at a bare minimum, first of all, a complete disregard for their feelings, their experiences, and arguably could radically re-traumatize certain people who’ve been victimized by violence," Queen told WSB-TV. "It clearly suggests a level of inconsideration, a level of coarseness that we ought not to experience from public officials,” he added.

Nevertheless, some Facebook commenters didn’t find the spooky setup quite so offensive, and even described the fake crime scene as “hilarious.”

“I think it’s hilarious! It’s Halloween for goodness sake! You will see these Halloween decorations all over the neighborhoods, so are you going to start raising hell with each of them as well?” one user replied to Newsome. “Sheesh.”

“I can understand your feelings," another woman said. “I too am a grieving Mom, [but] this is a simple decoration you will see everywhere.”

When reached on Thursday, a spokesperson for the Paulding District Attorney's Office declined to comment on the backlash.

The skeleton crime scene has reportedly been removed.

In similar headlines, another Georgia residents homeowners' association has asked him to censor a "cheeky" Halloween display after finding his "mooning" pumpkin-man to be offensive.