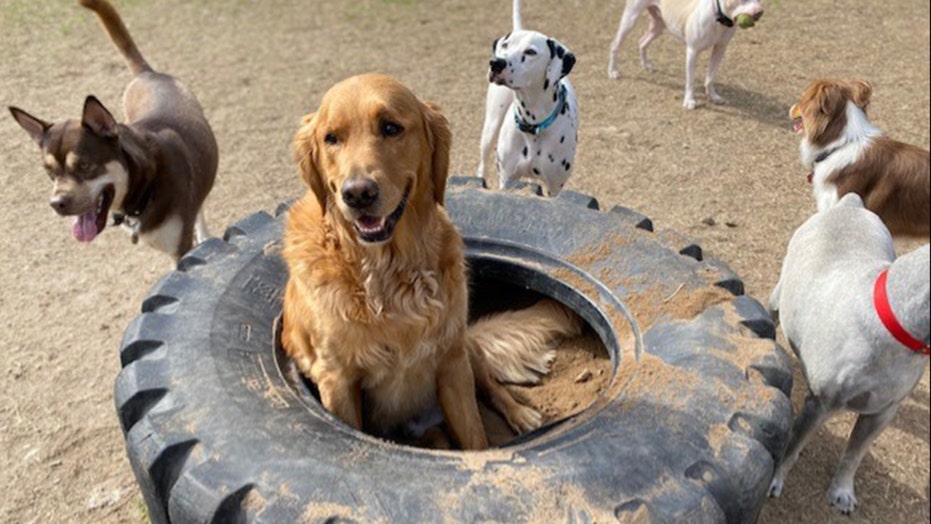 In March, analysts projected non-medical pet services like grooming, pet sitting, pet insurance, boarding and training to fall by as much as 45 percent. Nearly a year later, those services are fortunately proving everyone wrong.

"This was built solely off something I loved but I wasn’t finding," Dretzka said of her initial business idea, which provided pet owners with a place to work or study while their animals were playing at the space's indoor/outdoor dog park.  "So, I took everything that I loved about the daycare industry and being a pet parent and then I just rolled it into one facility. "

But when shutdowns amid the coronavirus pandemic began nearly a year ago, the doggy daycare owner said business became uncertain.

A doggy daycare in Texas is thriving thanks to the owner's latest idea.

"At first, we were really nervous… Like anyone else, didn’t know what to expect and we ended up closing down at the end of March," Dretzka said.

Dretzka opened her doors again about a month later, but this time, she was appealing specifically to dog owners stuck at home. Her co-working doggy daycare now allows for more social distancing — and even has individual office spaces — so clients can work in a safe environment while their dogs play.

Work and Woof's individual workspaces allow for social distancing while the clients' dogs are in daycare.

"We are surrounded by apartments, so the fact that we have people inside apartments that can’t go into the office, and you have a dog that is demanding your time and energy while you are trying to work, bringing them to a facility where you trust and you don’t need to worry about your dogs is a standout feature that people didn’t realize they needed," Dretzka said. "Like coffee shops and places where people normally can take their dogs to work, if they weren’t outdoors, people just didn’t feel safe. So we were able to say ‘Hey, you can have your own office, and desks are socially distant,' and that really just made people feel safe."

The business is now thriving, even as the COVID-19 pandemic continues.

"For me, I think I just looked at what was missing and that’s what helped the new ideas come," Dretzka said

The breeding of creativity is something that pet analysts, like David Lummis, credit with saving the non-medical pet industry from a big financial loss.

"We had it declining by about 45%, which is crazy because we had never seen decline in that area of the market, which up until then had been growing by about 10% anually," said Lummis, who added that such businesses were "the fastest growing sector of the pet industry."

"In the services area, what we have seen is an increase in things like mobile grooming, so people don’t have to leave their home and have limited contact," Lummis said. "We have also seen an increase in remote training services."

The pet industry is a multi-billion dollar industry, but COVID-19 has barely slowed it down.

The pet industry generates about $100 billion every year, 10% of which comes from non-medical pet services like grooming, training, pet-sitting, pet insurance and pet boarding.

"When we were first looking at the pandemic back in March and April, things just appeared so grim," Lummis said. "It really looked like there were going be these massive shutdowns."

The industry will still take a hit, Lummis said it won’t be as big of a bite as they originally predicted. Only "about at 10% decline at the most, which again is just remarkable," Lummis said.

Experts say pets are treated like members of the family, contributing to the success of the pet industry during the pandemic.

The love people have for their pets is also a reason forecasters are fetching a different outcome, Lummis added.

"Pet owners are really going to any lengths now keep their pets healthy and happy and so even during this pandemic. That persisted," Lummis said.

A "pet boom" is also contributing to what analysts say is a surprising comeback for the industry.

"With so many families stuck at home, we have seen a significant rise in the pet population," Lummis said. "And, of course, when you have new pets, those pet owners are the highest spenders in the market — across the board — when it comes to products and services, so that has really helped."