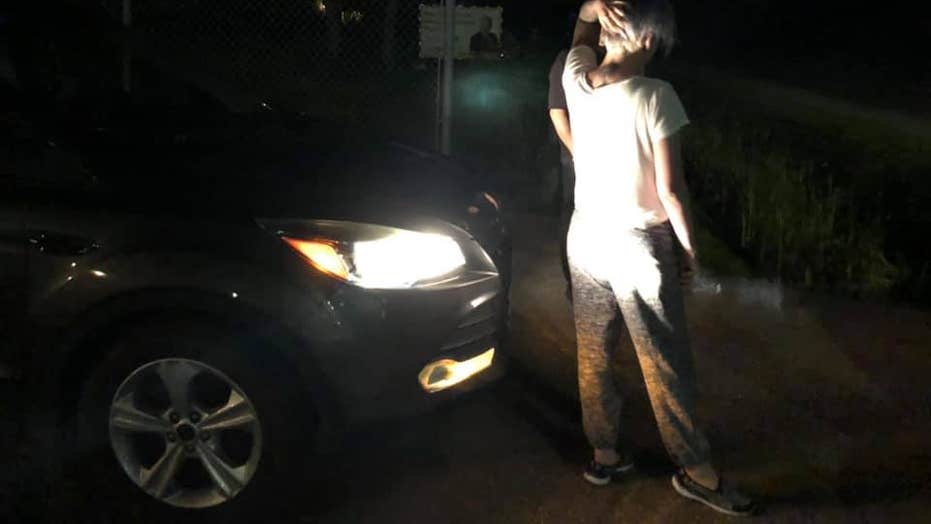 Three Canadian teenagers have become viral heroes after they helped out a woman whose car had broken down.

Aeron McQuillin, 18, Bailey Campbell, 17, and Billy Tarbett, 15, were out on a late-night Tim Hortons run when they noticed the Chevy Cobalt emitting smoke at a nearby intersection.

Aeron McQuillin, 18, Bailey Campbell, 17, and Billy Tarbett, 15 helped to push a woman's car over five miles after it broke down in Canada. (Aeron McQuillin Facebook)

The trio pushed the car off the road and assessed the problem to be a leak that allowed engine coolant and oil to mix. After the driver told them she couldn't afford a tow truck and didn't want to wake up her roommate, they took the matter into their own hands to make sure the woman's car got to her destination.

“You boys ready for a push?," McQuillin said when recapping the story on his Facebook page.

#BE HONEST: CANADA AIRPORT KIOSK RELIES ON THE HONESTY OF CUSTOMERS

McQuillin went home to grab some water and music speakers to get the group pumped up before they began to push the vehicle toward the driver's home, over five miles away.

Another bystander who happened upon the scene, Dan Morrison, drove behind the three teenagers in his Ford Escape, using his headlights to help illuminate the road during the trip.

The group faced plenty of obstacles during the two-hour journey, including a 900-foot high hill at the start of the push and a dead battery halfway through, Campbell told CNN. They had to recharge the battery before they could put the car back in neutral and continue.

They finally made it to the woman's home, where Campbell said the motorist was thankful and amazed for their act of kindness. Morrison told CNN he and the driver thought the teens were crazy to offer to push the vehicle so far.

When McQuillin got up the next day, he didn't expect the trio to become viral heroes.

"The next morning we all woke up to our phones blowing up with messages and Facebook notifications from total strangers, showing their appreciation and gratitude for our random act of kindness," said McQuillin. "On behalf of bailey [sic], billy [sic] and myself - thank you so much to everyone for the kind words and offers of gifts. We hope more people can learn from this situation and not be afraid to lend a helping hand to those in need."