The ever-mysterious street artist Banksy is at it again.

A pop-up Valentine’s Day painting was found on the side of a home in Bristol, England, on Thursday, depicting a girl firing red flowers made with spray-painted ivy from a catapult.

The unexpected art piece quickly became an attraction, as many believed the work to be of Banksy, the anonymous artist known for his often political street art.

Banksy added to the speculation on Friday when he posted an image of the artwork to his Instagram page at midnight.

Now efforts are being made to protect the “special” work from upcoming Storm Dennis and potential vandalism, the BBC reported.

"There's so many people coming and enjoying it, taking pictures, it's fantastic,” said Kelly Woodruff, whose father owns the property.

"There's been a lot of debate if it is a Banksy or not. Most people I've spoken to think it 100 percent is, and they're naming it the Valentine's Banksy,” she said. "It's incredible and beautiful."

Flowers placed on a road sign as part of the artwork had already been stolen, Woodruff said, and the protective plastic screen they placed over it on Thursday evening had been vandalized. 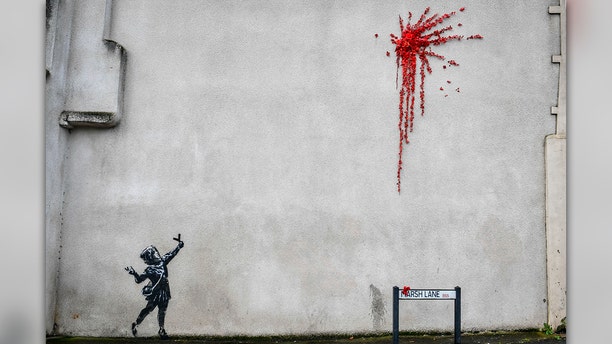 A woman walks past a new artwork on the side of a house in Bristol, England, Thursday Feb. 13, 2020, which has been confirmed as the work of street artist Banksy. (Ben Birchall/PA via AP)

Woodruff has been advised by the Bristol City Council to get in touch with the International Fine Art Conservation Studios (IFACS) in Bristol for guidance.

Meanwhile, spectators can’t get enough of Banksy’s latest piece, which has garnered more than 1 million likes on Instagram.

“How has no one spotted a guy with a spray can and a set of ladder,” an Instagram user wrote, “what makes this guy great Is that he does it for art and not greed of money and fame.”

“Banksy is a living (still) underrated genius,” another fan gushed.

What made the artwork even more special was that it was discovered on Woodruff’s father’s birthday.

“Thank you for making my dad's birthday one to remember,” she wrote on Instagram. “Words can't describe how excited we are.”