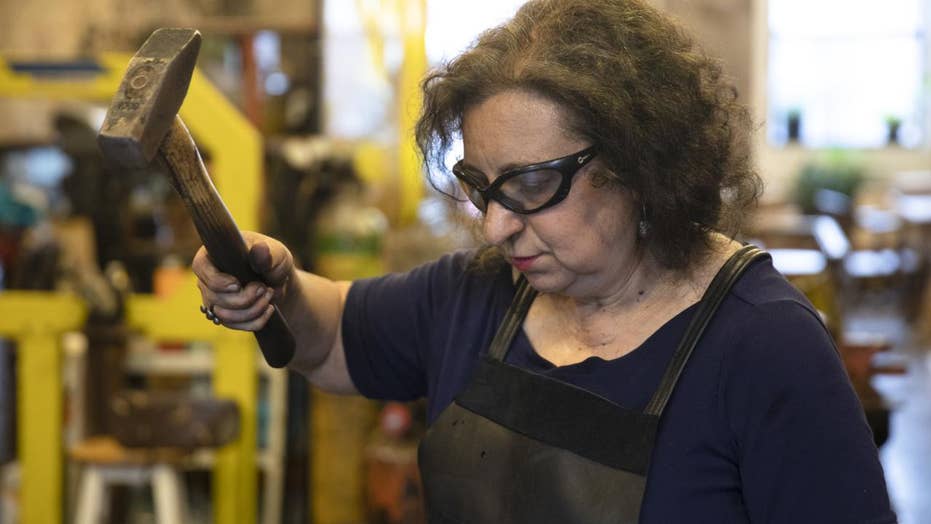 Not just a Revolutionary War profession: How one blacksmith is hitting the iron while it’s hot this July 4th

Marsha Trattner has been a professional artist and blacksmith for a little over three decades, and her aptly-named studio, She-Weld, is located in Brooklyn, New York. Trattner takes Fox News through the process of creating a bbq fork from start to finish so you can hit the grill while it’s hot this Independence Day.

When you think of a blacksmith, you probably think back to colonial times, a rugged, Founding Father-type with rolled-up sleeves, hammering away on an anvil. But the art form is alive and well today, and it doesn’t necessarily look like how you may think.

Marsha Trattner has been a professional artist and blacksmith for a little over three decades, and her aptly-named studio, She-Weld, is located in Brooklyn, N.Y. Fox News sat down with her to talk about what it’s like to be a blacksmith in 2019.

Fox News: Is it unusual to be a female in the blacksmith profession?

Marsha Trattner: I don’t think so, seems right to me! In all seriousness, it feels so natural to me to do this work. When I am at my anvil, it is exactly where I want to be. Blacksmithing is how I perceive the world and how I think in it.

Honestly, it is unusual to be a blacksmith at all, male or female. Yes, it is a resurging and thriving profession, with many branches, or seedlings… but it is really hard work, and really specific work, and the only people that really understand that are other blacksmiths.

8 GRILLING MISTAKES YOU NEED TO AVOID

"When I am at my anvil, it is exactly where I want to be," says Trattner.

Here’s a little side story: I was at a blacksmith (conference) called a “hammer-in,” and one guy was talking about historical and replication work. I brought up that there is now the first woman blacksmith working at Colonial Williamsburg, and he said, “That’s not historical.” I said neither is driving in a car to get to a job at Colonial Williamsburg! Historical is relative.

Is the female blacksmithing community large? Not large, but bigger than most people realize. The great thing about social media, and features such as this one, is that we are becoming more visible and eventually it won’t seem so weird.

Fox News:  What's a popular misconception about the blacksmith profession?

Trattner:  Many people assume that if you're a blacksmith, that means you shoe horses. Someone who shoes horses (and specializes in the care of horse’s feet- kind of the podiatrist of horses) is called a farrier. As with most things, some farriers also do blacksmithing and some blacksmiths shoe horses, or even started full-time as one and switched to the other, but they are considered separate trades. The same goes for the difference between bladesmiths and blacksmiths.

5 SIGNS YOU'RE AT A BAD BARBECUE JOINT

Fox News:  What has been your favorite item to make?

Trattner: I made a bread rack for Amy’s Bread and I loved the trifecta challenge of creating a unique piece of art that could stand alone, that would show off and enhance the bread — so people buy the bread! — and that would work sculpturally with the bread as its own visual statement, meaning it had to be a metal-bread artwork. And it had to conform to bread specs, as in fitting all the different sized and shaped loaves, and have a 1-inch maximum bottom spacing so the baguettes do not fall through.

Tratter says she's especially proud of the work she did for Amy's Bread in Brooklyn. (Marsha Trattner)

I had artistic freedom, but that came from brainstorming directly with the owner, Amy, to find out what she needed and envisioned. I forged wheat stalks using various industrial steel types so it became a fun game of reinvention, and I also used images of Van Gogh’s wheat field drawings and paintings as inspiration for creating the whole unit as if it were a three-dimensional landscape wall drawing.

I was really pleased with the final outcome (and yes, there was plenty of bread for research purposes!). But mainly, I choose this project because the process … became a great model for future projects. For instance, I used a similar strategy for designing and making a banister for fashion designer Cynthia Rowley, but this time, instead of wheat fields, we were using the image of pebbles in a stream, and I connected it with sculptor Alexander Calder’s jewelry as an artistic reference.

Fox News:  When did you start offering classes at She-Weld?

Trattner: Very soon after opening my studio, friends and neighbors asked me to teach them how to weld. I teach a 10-week class called Creative Blacksmithing, offered through the School of Visual Arts Continuing Education. It is a full-length semester SVA class, but it takes place at my studio. The studio atmosphere is cozy and relatable, and the weekly classes give people time to gain skills, experiment, and develop personal work. Some people take the class multiple semesters so they can continue to develop their blacksmithing skills and create more amazing artwork as well as functional metal objects.

Fox News:  What’s your favorite tool and why?

Trattner: Hammer, anvil… It's hard to choose as they're like two hands, working together. If I need to choose, I would say the anvil — the large hunk of metal we hammer the metal upon… and nowadays what most people recognize more from cartoons than an actual tool.

"The blacksmith is just a guide for the tools to move the metal," Trattner explains.

The anvil may appear like any big chunk of metal. However, it is designed to give you maximum power and movement. There is actually a rebound off the anvil, so if you know how to hit correctly, you really don't have to hit that hard — it does the work for you. Similarly, you hold the hammer loosely in your hand (one would imagine not, but you do) and you use the weight and shape/dynamics of it to work for you. The blacksmith is just a guide for the tools to move the metal, which is not the way one would generally think of tools. It is as an artist may think about, and use, a pencil to draw.

The anvil serves many functions, more than just bashing metal, as blacksmiths use them also for bending, cutting, punching holes, etc. Every part of the anvil is essential and I keep learning new ways to use it to shape metal. The anvil is one of the most ancient tools that has basically not changed in a millennium. It is the perfect tool.

A good anvil will have good "rebound," Trattner says.

I have more than one anvil, as they each serve their own purpose, and, well, why have just one?

Fox News:  What is your message for young girls and artists who may want to get into blacksmithing?

Trattner:  You do not need to feel intimidated. It is a welcoming environment and it is a malleable profession. I was fortunate when I was just starting out to have a couple of older male mentors (one was an 8th-generation Italian blacksmith and he was 75 years old when I worked in his shop. At that point in their lives they had no need for attitude, if they ever did. More importantly, they understood and communicated to me that everyone has physical limitations, so you figure it out accordingly: Use tools, leverage, and strategy.

Additionally, from a pragmatic point of view, you don’t need a whole lot to get started- you can do a lot with a little, including making your own tools! Learning directly from another blacksmith, or taking a class or classes, is a good idea. From a work ethics point of view, be adaptable. Think big picture, even though you don't know what that will be.

For more, watch Marsha Trattner in action – creating a Fourth of July barbecue fork from scratch – in the video above.