Amy Pohl once led a normal life as a primary school teacher in the English county of Warwickshire. But the 25-year-old now suffers from a rare chronic pain condition known as complex regional pain syndrome, or CRPS, which has left her bedridden and forced to be fed through a feeding tube.

Pohl was diagnosed with CRPS in January 2018. She first noticed signs of the condition following a brief hospitalization for croup, an infection of the upper airway that can cause difficulty breathing and a "barking" cough. She claims a botched IV insertion in her hand during her hospital stay led to an infection, according to the Daily Mail. Pohl said she now suffers from constant and “excruciating” pain in her left arm.

“The only way to describe the pain in my arm is like I'm being stabbed by a hundred shards of burning glass,” Pohl told the Daily Mail, adding the pain is so severe she once contemplated suicide.

CPRS, according to the Mayo Clinic, is a “form of chronic pain that usually affects an arm or leg.” The rare condition typically develops following a surgery, stroke, heart attack or other injuries — but the cause is not yet well understood.

The condition is dubbed the “suicide disease,” according to the Daily Mail, as those who suffer from it have been known to take their own life in a desperate attempt to find relief. In fact, researchers in a 2014 study determined more than 70 percent of participants with CRPS were considered to be "high risk” for suicide.

“I can't even hug my [mom] and dad anymore. I struggle when people even breathe on my skin because of it,” she added, per the Daily Mail. “I can’t do anything for myself.” 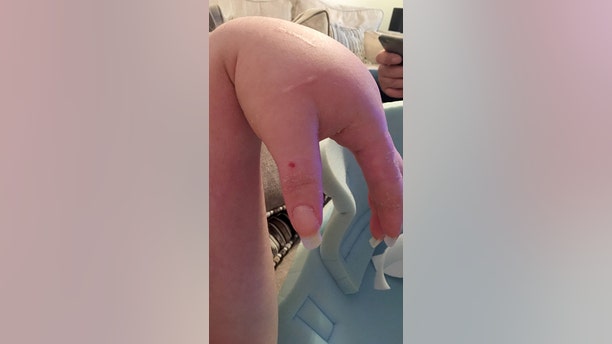 Pohl also noted the pain has spread to her abdomen, making eating difficult. She has reportedly lost more than 50 pounds following her diagnosis and is now fed primarily through a feeding tube.

“When I eat it feels like being stabbed in the abdomen by a burning knife,” she said. “I'm currently managing about 200 calories a day by mouth and by tube.”

Pohl has also developed both Functional Neurological Disorder (FND) and Post Traumatic Stress Disorder following her initial CRPS diagnosis. The former — a rare condition which affects the nervous system and impacts how the brain and body send or receive signals, according to the National Organization of Rare Disorders — is reportedly a result of her CRPS. Pohl has lost her ability to walk due to FND, according to the British news outlet.

“The thing that keeps me going is thinking about going back to work. I loved my job so much. It was my life so I just want to get back to doing what I love,” said Pohl, who has been “in and out of the hospital since December 2017,” according to a fundraising page in her name.

“'I just wanted my old life back," she continued, adding she once asked for doctors to amputate her arm as a way to find relief. Her request was denied as the procedure is controversial and is typically used as a last resort, according to a 2015 study published in the Ochsner Journal.

Though there is no cure, patients with CRPS can sometimes enter remission, according to the Mayo Clinic. The woman’s family is now hopeful she will eventually be treated at a specialized rehab facility in Sheffield.