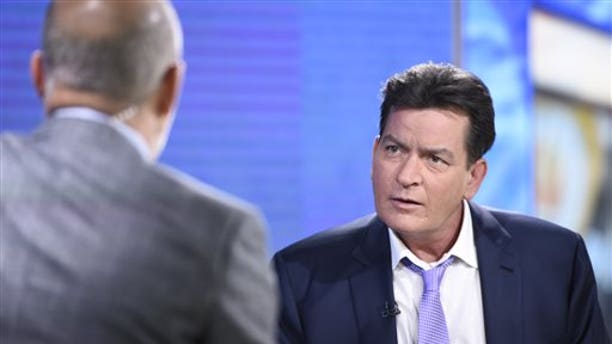 Former "Two and a Half Men" star Charlie Sheen, right, is interviewed by Matt Lauer, Tuesday, Nov. 17, 2015 on NBC's "Today" in New York. In the interview, the 50-year-old Sheen said he tested positive four years ago for the virus that causes AIDS. (Peter Kramer/NBC via AP)

Actor Charlie Sheen's announcement that he is HIV positive may seem like bleak news, but like others infected with the virus, he could have a relatively normal life, doctors say.

"I am, in fact, HIV positive," Sheen, 50, told Matt Lauer on the NBC show "Today," adding that when he learned of his status about four years ago, it was "a hard three letters to absorb." "It's a turning point in one's life," he said.

According to the Centers for Disease Control and Prevention (CDC), 1.2 million people in the U.S. are living with HIV. Though the human immunodeficiency virus (HIV) is a serious infection, the levels of the virus in a person's body can be controlled with a handful of drugs, and many people living with the virus have a normal life span, said Dr. David Rosenthal, medical director at the Center for Young Adult, Adolescent and Pediatric HIV at the North Shore-LIJ Health System, in Great Neck, New York. [10 Celebrities with Chronic Illnesses]

"It's much more like a chronic illness," said Rosenthal, who is not involved in treating Sheen.

No longer a death sentence

HIV destroys the so-called T-cells of the immune system, making it difficult for people infected with the virus to fight off infections.

It is spread through certain bodily fluids, including blood, semen, rectal fluids, vaginal fluids and breast milk, according to the CDC. The virus is most commonly transmitted through sharing needles or having unprotected sex with an infected person. However, Sheen said he is not sure how he got HIV.

In the 1980s, an infection with the virus was a sure death sentence. Back then, HIV infection inevitably progressed to the disease AIDS (acquired immune deficiency syndrome). A person is considered to have AIDS when HIV has wiped out many of his or her disease-fighting T-cells — typically, when there are fewer than 200 T-cells per cubic millimeter of blood. At that level, the person is even more prone to infections.

Back in the '80s, people typically lived just three years after an AIDS diagnosis, according to aids.gov.

"Patients who got on the treatment early were able to suppress the virus, were able to keep their immune system strong and were able to maintain health as a result," Rosenthal said.

Sheen started taking antiviral drugs immediately after his diagnosis, and now, the levels of the virus in his blood are so low that the virus is undetectable, his physician, Dr. Robert Huizenga, an assistant professor of clinical medicine at UCLA, said on the show.

In fact, Sheen's other health problems are bigger concerns than his HIV infection, Huizenga said. "My biggest concern with Charlie as a patient is substance abuse and depression from the disease — more than what the HIV virus could do in terms of shortening his life, because it's not going to," Huizenga said on the show.

"A lot of patients are just taking one pill once a day," Rosenthal told Live Science. "It's very different [from] when patients were taking 15 medicines two or three times a day in the early days."

People who are living with HIV not only have a normal life span, but they also have a quality of life that is quite good, as long as they take their medication regularly, Rosenthal said. Although people with HIV tend to have elevated cholesterol, a slight loss of bone density and a higher rate of coronary artery disease, doctors don't know whether those side effects are a result of the medication or the virus.

And because people with HIV typically see doctors at least a few times a year, they can have those potential side effects monitored and controlled, Rosenthal said.

Sheen said that it is "impossible" that he transmitted the virus to anyone else, because the only two people he had unprotected sex with since his diagnosis were under the care of his doctor. In fact, such transmission is possible, though extremely unlikely. In any event, people can protect themselves from the disease even if they are engaging in activities that have the potential to spread the virus, Rosenthal said.

For instance, people who could be potentially exposed to the virus — such as after a condom breaks during sex with an HIV-positive person — can take a post-exposure pill to prevent HIV infection. For this pill to be effective, people must take the medicine within 36 to 72 hours of exposure, Rosenthal said.

Today, people who engage in activities that are known risk factors for HIV on a somewhat routine basis, such as having sex with sex workers or sharing needles, can also use pre-exposure prophylaxis (PREP) to protect themselves against HIV even if they are exposed. Those who use PREP take a once-daily antiretroviral pill called Truvada. Taking one pill has fewer side effects than the three-drug cocktails that HIV-positive people take, and people can start or stop the regimen based on their lifestyle, Rosenthal said.

"Treating HIV is much easier now than it was years ago," Rosenthal said. "But if you can take one pill a day to prevent yourself from getting HIV, that's a very wise decision."