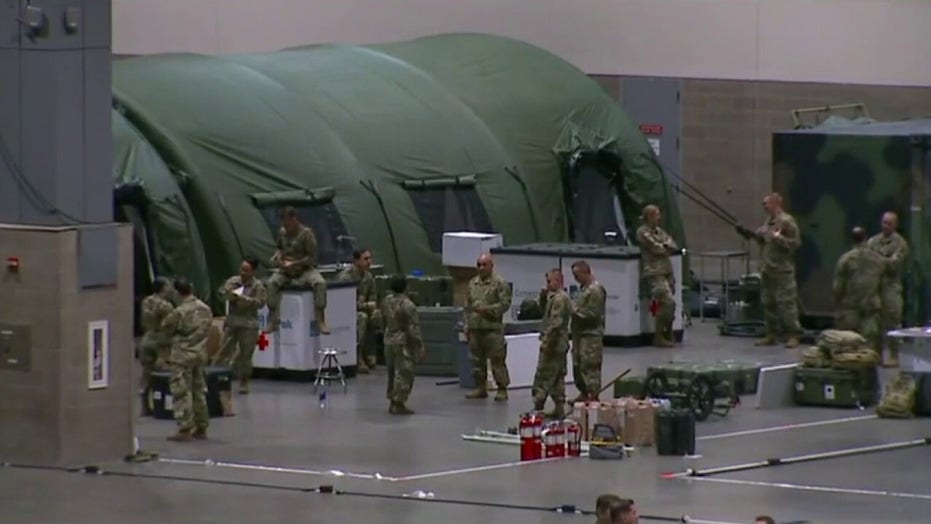 Washington state, the first epicenter of the U.S. coronavirus outbreak, closes makeshift facilities after turning a corner in the fight; Dan Springer reports.

An emergency room doctor in Seattle, who was in critical condition last month after being diagnosed with COVID-19, has described his journey to recovery on Monday.

Ryan Padgett, 45, was previously described as an unnamed emergency physician in his 40s who was in stable but critical condition after having symptoms consistent with the COVID-19.

He works at EvergreenHealth Medical Center in Kirkland, Wash., where at least 15 people had died from the coronavirus back in mid-March -- when the area was described as the epicenter of the virus outbreak in the U.S., according to New York Times.

CORONAVIRUS: 2 US EMERGENCY ROOM DOCTORS IN CRITICAL CONDITION FROM VIRUS

A line of signs in appreciation of health care workers working during the coronavirus outbreak line the curb in front of EvergreenHealth Medical Center Thursday, April 2, 2020, in Kirkland, Wash. An emergency room doctor in Seattle, Wash., who works at the hospital was in critical condition last month after being diagnosed with COVID-19, He described his "scary" journey to recovery on Monday. (AP Photo/Elaine Thompson)

He's back in his home nearly a month later, gaining his strength back while describing how quickly the virus impacted him.

"This is very scary," he told NPR. "That it's not only medically fragile patients, but young people can be cut at the knees and taken down by this."

He said he originally had a headache with some muscle soreness before realizing he couldn't breathe a few days later.

It was at that point his fiancée, Connie Kinsley said she told him to go to the hospital. Within hours staff put him on a ventilator.

"I have no personal recollection, but evidently I told [Kinsley] where some important documents were, just in case," he told NPR. "And the next memory I had was about 16 days later, waking up at Swedish Hospital [in Seattle]."

"I have no personal recollection, but evidently I told [Kinsley] where some important documents were, just in case," he told NPR. "And the next memory I had was about 16 days later, waking up at Swedish Hospital [in Seattle]."

He said the hospital was one of two in Washington state that have a form of life support called extracorporeal membrane oxygenation (ECMO) which oxygenates a person's blood by bypassing the lungs, according to the media organization. His doctor said it kept him alive while they tried other therapies.

"It saved my life," Padgett said of the life support. "I'd dwindled to the point of my lungs, liver, kidneys, and heart, all going into organ failure, multi-system organ failure."

Padgett said he's been amazed at how COVID-19 has changed the world over the past few weeks since he was nearly killed by the virus.

"I felt like Rip Van Winkle, waking up ... and realizing that the world had shut down," he said.

"I felt like Rip Van Winkle, waking up ... and realizing that the world had shut down."

He also woke up to find his May 16 wedding with Kinsley was postponed due to the coronavirus, which he said wasn't a big deal considering everything else going on in the world.

"Perspective changes, I tell you," Padgett told NPR. "When you survive something like I survived, you realize that's all window dressing. It doesn't matter."