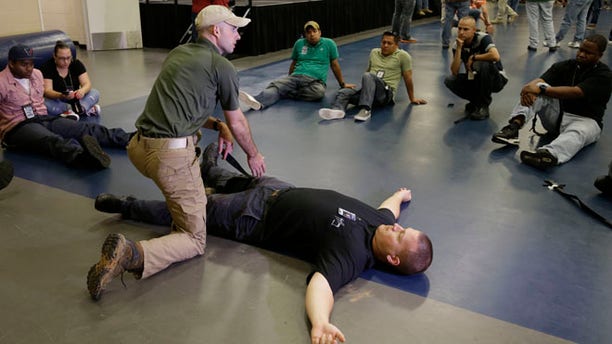 Rushing into a Houston home, police officer Austin Huckabee encountered a drunken, combative man bleeding profusely on the kitchen floor. He quickly realized the blood was spurting in rhythm with the man's heart, and cardiac arrest was just moments away.

Pulling a tourniquet from his belt, the former Army captain and his partner restrained the man, wrapped the band around his arm and twisted an attached rod to tighten it until the bleeding stopped. Then Huckabee waited for paramedics, knowing a life had been saved.

The tourniquet, one of the world's oldest and most easily used medical tools, is making a comeback on American streets after more than a decade of war in Iraq and Afghanistan showed how a simple, 20-second procedure could save lives.

Now law-enforcement agencies nationwide are equipping officers with the blood-staunching bands in an effort to duplicate that battlefield success.

"The only silver lining that comes from any war is improvements in medical care and specifically in trauma care," said John Holcomb, director of the Memorial Hermann Texas Trauma Institute, who is leading the push to give Houston police tourniquet kits.

Tourniquets fell out of favor during the Civil War, when prolonged use invited amputation, particularly for wounded men who lay on the battlefield for days. Those fears lingered, and tourniquets were rarely used, even in Vietnam.

Today, battlefields are often cleared in less than an hour, Holcomb said, and doctors know how little time they have to save both life and limb.

Instead of a cloth and metal, modern tourniquets feature Velcro and a plastic rod known as a windlass. But the basic operating principle has not changed since the Civil War: The device compresses damaged limbs to the point that blood vessels are squeezed shut and bleeding stops.

In Houston, all 5,000 officers are expected to be carrying the kits by September. Dallas officers got the same equipment late last year. Boston police received tourniquets shortly after last year's marathon attack. New York and Los Angeles are in the process of obtaining them.

One of the most common emergencies encountered by officers is a motorcycle accident like the one that severed Jeremy Brooks' right leg in May. Brooks barely remembers the crash, but he recalls clearly being told by doctors that the person who put the tourniquet on his severed limb at the scene probably saved his life — and possibly his knee. The knee will make it easier for him to be fitted for a prosthetic.

"I was surprised someone knew how to do it. ... It's not common nowadays," said Brooks, who plans on learning how to use a tourniquet and carrying a kit himself.

When the U.S. went to war after the Sept. 11 attacks, most of the military did not have tourniquets, said Frank Butler, chairman of the Committee on Tactical Combat Casualty Care in the Army Medical Research and Material Command.

Change began in 2004 when Holcomb, a seasoned combat surgeon, was asked to help research battlefield deaths. The study found that deaths from blood loss were largely unchanged since Vietnam, when about 7.4 percent of fatalities bled to death. In the early years of the war in Afghanistan, hemorrhaging caused about 7.8 percent of deaths.

Doctors concluded that applying a tourniquet could cut those numbers. By 2011, deaths from bleeding extremities had decreased to 2.6 percent.

"There's no question that the military has shown us that the earlier that you achieve hemorrhage control, the better patient outcomes are," said Dr. Alex Eastman, a Dallas police lieutenant and interim chief of trauma surgery at Parkland Memorial Hospital.

Ed Davis, who was Boston's police commissioner during the marathon bombing, arrived at the scene to find dozens of critically injured people, some of whom had lost limbs. Tourniquets had been fashioned out of shirts and belts.

"They were effective, but it was clear that if police officers had had them, we would have been in a much better situation to stem the bleeding," Davis said.

Within two months, Davis ordered tourniquets for the department's 2,250 officers.

The tool comes with some risks, however. The Red Cross and others warn that tourniquets can cause damage if used incorrectly. And without the windlass, Holcomb noted, it can be ineffective.

"You need to twist it to the point where it's almost unbearable," he says at a training session, watching officers wince and groan as the tourniquet tightens, cutting off blood flow to their arms.

Like other officers who served in the military, Huckabee carried tourniquets before the department distributed them. He was thankful for that experience last August when he encountered the bloody kitchen.

"This," he tells the officers in training, "is near and dear to my heart."