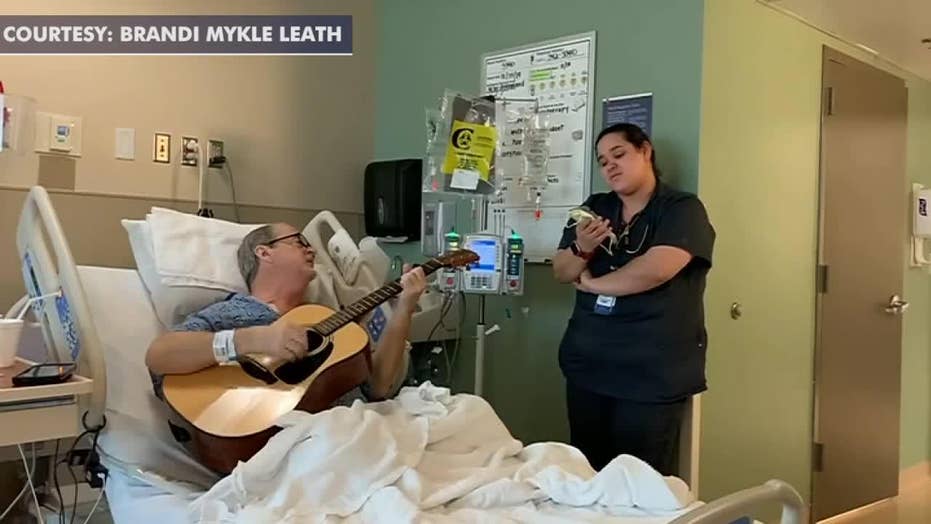 A Nashville-based oncology nurse’s attempt to brighten one of her patient's spirits through music has gone viral.

Alex Collazo, who works at Tristar Centennial's Sarah Cannon Cancer Center, is a nurse for Penn Pennington, a 67-year-old longtime musician who is battling non-Hodgkin's lymphoma. Pennington, who was first diagnosed with cancer in 2010, learned over the summer that the disease, which was previously in remission, had returned. This time, doctors told him it was "more life-threatening, more aggressive,” per TODAY.

"The particular plan for treating this strain of lymphoma has been an inpatient in the hospital, five days worth of chemo. Because it's so aggressive, we're having to hit it really hard,” Pennington said.

Understandably, the man was glum, especially after he was admitted to the cancer center to begin treatment.

“To find out the cancer is back… it’s not something anybody wants to hear," said Pennington.

Shortly after arriving, the musician — who, for the past 30 years, has played at various country bars in downtown Nashville and has even hit the stage at the Grand Ole Opry — met 24-year-old Collazo, The Tennessean reports.

"I admitted him to the hospital and we got to talking, so I asked him to tell me something fun about himself. I could tell he was kind of down," she told the newspaper.

Pennington proceeded to tell the nurse about his love for skydiving, while Collazo discussed her passion for music — singing, specifically. The two immediately hit it off, and Collazo offered to bring in her guitar for him to play.

On Sunday, Pennington was feeling well enough to give it a shot, and the two had a jam session. In light of the holiday season, the pair played “O Holy Night," as the nurse sang while Pennington strummed the guitar. The video of their performance, which was shared to Facebook by Pennington's daughter, Brandi Leath, has since gone viral. As of this writing, the footage boasted more than 6,000 reactions and shares, with some 350,000 views.

The 67-year-old called the moment an “escape.”

"Any time you go to the hospital for cancer, it's automatically a downer. This was an escape, for a while. It was a good thing," he told The Tennessean. Leath told the outlet that she was also deeply touched by the duet.

“Music is such a wonderful healer," she said. "I was completely, totally moved by this.”

Collazo said she used the duet as a way to help Pennington “forget he was in the hospital and what was going on.”

"This is what we do on our floor,” she added. “We put compassion into everything."