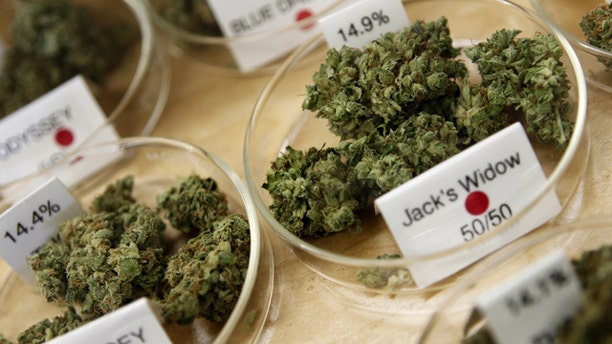 Anybody who's smoked marijuana knows about "the munchies," that desire to eat everything within reach. But a study from France has found that, surprisingly, pot smokers are actually less likely than non-smokers to pack on weight.

Using data covering more than 50,000 U.S. adults, researchers headed by Yann Le Strat, a psychiatrist at the Louis-Mourier Hospital in Colombes, France, found that roughly 14 percent to 17 percent of the people reporting that they smoked pot at least three days per week were obese.

That compared with a 22 to 25 percent obesity rate among people who said they had not used pot in the past 12 months.

"Initially, we thought we made a mistake," said Le Strat, adding that he and co-author Bernard Le Foll checked the results several times to make sure they were correct.

"This is only a preliminary result. It doesn't mean that marijuana does actually help you lose weight, but perhaps there is a component that does."

The study, published in the American Journal of Epidemiology, included two surveys of U.S. adults -- one covering 43,000 people, the other about 9,300 respondents. Both had been conducted by branches of the U.S. National Institutes of Health between 2001 and 2009.

Of all respondents to both surveys, between four percent and seven percent said they smoked pot at least three times a week.

Whether or not they smoked cigarettes as well had no influence on the obesity findings, though the researchers did not look at whether diet and exercise habits were different in pot smokers and non-smokers.

According to another recent survey, from the Substance Abuse and Mental Health Services Administration, pot use is on the rise in the United States. Almost 16 million U.S. residents used marijuana in 2010, an increase from about 15 million in 2007.

Scientists have researched the role of various molecules within marijuana smoke that produce the high feeling, block pain, and may underlie the hunger for food typically provoked by pot use.

Cannabinoids, molecules similar to natural signaling chemicals in the body, are believed to be key to stimulating appetite -- so much so that in 2006, a drug called Rimonabant, designed to work against cannabinoids, was developed.

Rimonabant was approved in more than 30 countries, but not in the United States, for the treatment of obesity. But the drug was pulled off shelves two years later because of an increased risk of suicide among its users.

Whether cannabinoids are the only appetite stimulants in pot smoke, or whether other chemicals might account for the effect, remains to be seen, the researchers say.

Other experts said the results didn't surprise them.

"There's no evidence that repeated marijuana use can increase body weight," said Vincenzo Di Marzo, professor at the Institute of Biomolecular Chemistry in Pozzuoli, Italy, who was not part of the study.

He warned that the study does not show that smoking pot helps you lose weight, but that it could be a starting point for future research.

Le Strat echoed this view and warned against experimenting with pot as a diet aid.

"I see people living with marijuana dependence. I hope people don't interpret the results to mean that if they use marijuana, they'll lose weight," he added.