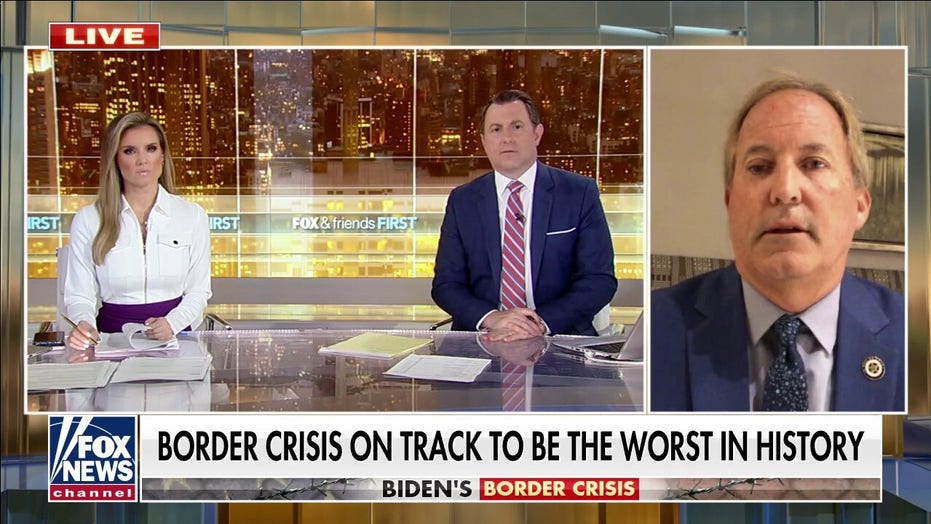 Texas Attorney General Ken Paxton on why he believes it's up to the state to decide masking in schools; the border crisis intensifies in Texas as apprehensions are on track to be the worst in history

The day before he was supposed to start fourth grade, Francisco Rosales was admitted to a Dallas hospital with COVID-19, struggling to breathe, with dangerously low oxygen levels and an uncertain outcome.

It wasn’t supposed to be like this, thought his frightened mother, Yessica Gonzalez. Francisco was normally healthy and rambunctious. At 9, he was too young to get vaccinated, but most of the family had their shots. She had heard kids rarely got sick from the coronavirus.

But with the highly contagious delta variant spreading across the U.S., children are filling hospital intensive care beds instead of classrooms in record numbers, more even than at the height of the pandemic. Many are too young to get the vaccine, which is available only to those 12 and over.

The surging virus is spreading anxiety and causing turmoil and infighting among parents, administrators and politicians around the U.S., especially in states like Florida and Texas, where Republican governors have barred schools from making youngsters wear masks.

With millions of children returning to classrooms this month, experts say the stakes are unquestionably high.

Very high infection rates in the community "are really causing our children’s hospitals to feel the squeeze,’’ said Dr. Buddy Creech, a Vanderbilt University infectious disease specialist who is a helping lead research on Moderna’s vaccine for children under 12. Creech said those shots probably won’t be available for several months.

"I’m really worried,’’ said Dr. Sonja Rasmussen, a pediatrician and public health expert at the University of Florida. "It’s just so disappointing to see those numbers back up again."

While pediatric COVID-19 hospitalization rates are lower than those for adults, they have surged in recent weeks, reaching 0.41 per 100,000 children ages 0 to 17, compared with 0.31 per 100,000, the previous high set in mid-January, according to an Aug. 13 report from the Centers for Disease Control and Prevention.

Dr. Francis Collins, head of the National Institutes of Health, calls the spike in cases among children "very worrisome."

He noted that over 400 U.S. children have died of COVID-19 since the pandemic began. "And right now we have almost 2,000 kids in the hospital, many of them in ICU, some of them under the age of 4,’’ Collins told Fox News on Sunday.

Health experts believe adults who have not gotten their shots are contributing to the surge among grownups and children alike. It has been especially bad in places with lower vaccination rates, such as parts of the South.

While it is clear the delta variant is much more contagious than the original version, scientists are not yet able to say with any certainty whether it makes people more severely ill or whether youngsters are especially vulnerable to it.

As experts work to answer those questions, many hospitals are reeling. Those in Texas are among the hardest hit. On Tuesday, they reported 196 children being treated with confirmed COVID-19. That compares with 163 during the previous peak, in December.

At Texas Children’s Hospital in Houston, the nation’s largest pediatric hospital, the number of youngsters treated for COVID-19 is at an all-time high, said Dr. Jim Versalovic, interim pediatrician-in-chief. In recent weeks, the vast majority have had delta infections, and most patients 12 and up have not had shots, he said.

"It is spreading like wildfire across our communities,’’ he said.

At times this month, his hospital system has diagnosed 200 children with COVID-19 a day, with about 6% of them needing hospital care. On some days, the number of children in the hospital with COVID-19 has exceeded 45.

Versalovic said he suspects hospitalizations of children are up simply because so many are getting infected, not because the delta variant makes people more seriously ill.

Francisco is improving and expected to recover, but his mother is worried and is considering home-schooling him. The virus "is really dangerous,'' she said.

The delta surge is yet another test for the nation's schools, which are dealing with students who fell behind academically as a result of remote learning or developed mental health problems from the upheaval.

Outbreaks have already occurred at reopened schools in the South that are facing resistance to mask-wearing.

In Texas, some school administrators are mandating masks in defiance of the governor and state Supreme Court. Among them is Michael Hinojosa of the Dallas school system, one of the state’s largest districts.

"This delta variant is different, and the numbers are really significant in the county,’’ he said. "We’re going to continue our mask mandate to keep students safe, to keep parents safe, to keep families safe and most importantly our teachers, who are on those front lines.’’

Although dozens of students and staff have already been sickened by the virus since the Dallas district’s 180 schools began reopening on Aug. 5, the numbers are far lower than when in-person learning resumed in the spring, Hinojosa said.

Knowing the toll the pandemic has taken on children, Hinojosa is determined to keep his schools open.

"We know they’ve been scarred by it," he said. "That’s why they need to be back with their friends and teachers.’’

In DeSoto, a Dallas suburb, schools are also requiring masks, and Superintendent D’Andre Weaver said there has been no pushback from parents, perhaps, he added, because many are Black and know their community was hit hard earlier in the pandemic. Some considered keeping their children home because of the governor’s opposition to school mask requirements, Weaver said.

As a parent and an administrator, Weaver said the delta surge "is a major concern, it’s a major frustration. It’s a big fear.’’

His own two girls started first and second grade this week, and the first thing he has been asking when he picks them up after school is "How do you feel? Do you have a sore throat?" Weaver said. "I know many parents are in the same boat.’’

While he knows many children suffered during virtual learning last year, Weaver said, ‘’We have no choice but to prepare that as an option.’