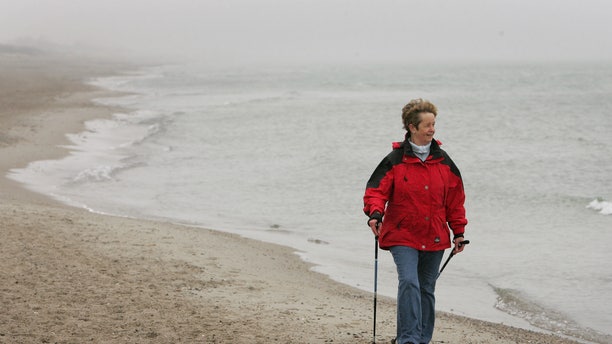 An elderly woman practices Nordic walking for rehabilitation exercise on the beach outside at a clinic in Damp on Germany's Baltic sea coast April 13, 2006. REUTERS/Christian Charisius - RTR1CQ1G

Nordic walking, or walking with ski poles, is an effective, full body workout, fitness experts say but it has a bit of an image problem.

The activity burns more calories and works more muscles than walking alone, but to embark on a public trek that looks like cross-country skiing without the snow can require a modicum of unselfconscious courage.

Malin Svensson a Swedish-born athlete, fitness coach and author of the book “Nordic Walking,” has been teaching it in America since 2002.

“It is something you have to try out to understand,” she explained. “Also people think it looks a little nerdy. My ex-husband disguised himself the first time.”

“In Europe it has become this old people walk,” she said. “They haven’t embraced the different techniques.”

Nordic walking began in Finland, where it first appeared in 1960’s physical education classes and later in off-season cross-country ski-training.

Today Nordic walking is done in around 40 countries and practiced by an estimated 10 million people worldwide, according to INWA (International Nordic Walking Federation), the official international federation promoting it.

Jessica Matthews, an exercise physiologist at Miramar College in San Diego, California, said Nordic walking poles come with changeable tips that adjust to any surface, from dirt trails to asphalt.

She said the poles, which sell for about $75, can also help maintain good body alignment.

“I think it’s a way to increase calorie burn without undue stress on shoulder and arm muscles,” said Matthews, who is not sure why it hasn’t gained more traction in the United States.

Svensson said wherever there is cross-country skiing in winter, Nordic walking is easy to introduce.

“If you have no clue what cross country skiing is, you’ll have no clue about Nordic walking,” she said. “In the United States there are pockets of activity across the Northeast and Midwest, where people get the concept.”

Svensson added that it’s a whole body workout that begins at the doorstep and requires only two walking poles and an open mind.

“Ninety percent of the people who try it fall in love with it,” Svensson said. “It looks nerdy. But once you try it you’ll never go back. “