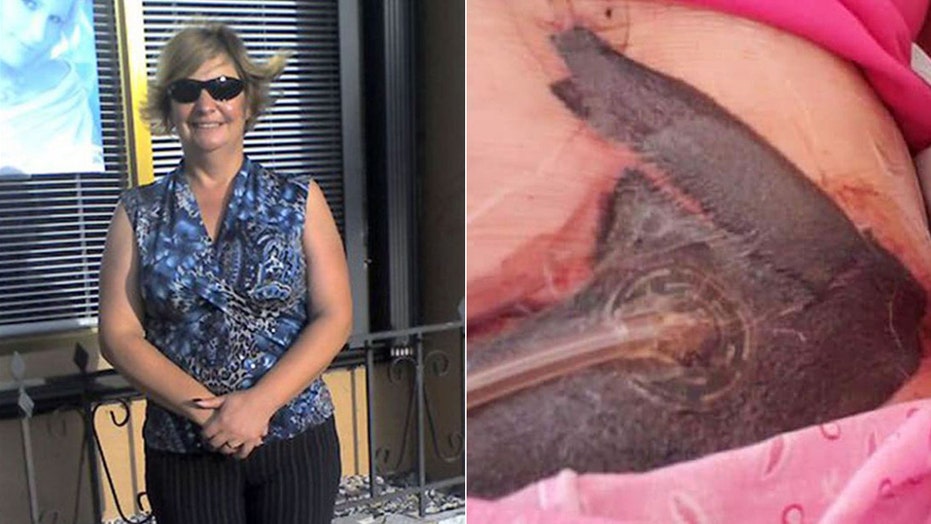 A mom was left fighting for her life after having weight loss surgery in Colombia. Beatrix Searles, from Montana, forked out $4,000 on liposuction last October. But just days after the operation, the 53-year-old said the flesh around her wound began to rot, and turned black.

Searles has since undergone seven surgeries — to try and rectify her "botched" surgery abroad and has been left with nasty scars across her tummy, after her stitches burst open. She claims doctors told her surgeons in Colombia could have failed to follow medical hygiene procedures.

"I chose Colombia because when I researched, it was the country that specialized in the surgery I wanted and they did it at reasonable prices," Searles, a trucker driver, said. “Yet as my skin started to blacken and die, I was on so much pain medication that I couldn’t feel anything — I just knew something was really badly wrong. My skin completely died and I've been left in constant pain."

Searles said she was about 182 pounds when she decided to undergo the surgery, and researched her clinic online.  (Caters News Agency)

Searles said she begged doctors in Colombia for answers.

"The surgeon originally tried to fix what he'd done by using skin from my back and pulling it forward," she said. "But it went stiff and sore, and I needed hospital treatment to try and rectify that. Yet now, no one can locate the surgeon who did this to me, he's essentially missing in action. The last I heard he had 34 cases being held against him."

Searles weighed approximately 182 pounds when she decided to have the operation, to boost her confidence. After researching her options, she settled on lipo on her leg, stomach and back.

Just days after the operation, she noticed her skin was turning black and began asking for help. (Caters News Agency)

"I watched the surgery on their various YouTube channels and videos, and I thought I knew what I was expecting," she said. "But while I was under, they literally cut the fat off my stomach and stitched me back up. Yet there was so much missing — the nurses providing the aftercare used the same gloves for things like using their phone. I wasn't provided with anything that I'd seen on the videos, like plastic wrapping over the surgery or a body suit to protect it."

"By the second day, it was red, inflamed and you could see — the skin was dying," she said.

Searles was forced to undergo a further seven operations following on from the original liposuction in October 2018 – which included skin grafts and drainage – in order to try and fix the gaping hole that had been left by the dead skin.

She's undergone several corrective surgeries which she said has gutted her self confidence and "destroyed" her life.

"The hospital in Colombia tried to oxygenate the skin but it had turned completely black," she said. "To have eight surgeries, with constant needles, with me even spending my birthday in hospital — I've been so scared and have spent most of my recovery crying all of the time. This has destroyed my confidence — it's been like torture."

"I can't look like this forever — I feel like I can't go out into public or wear a bikini or go to the beach," she said. "It's destroyed my life and I hope those responsible get brought to justice."