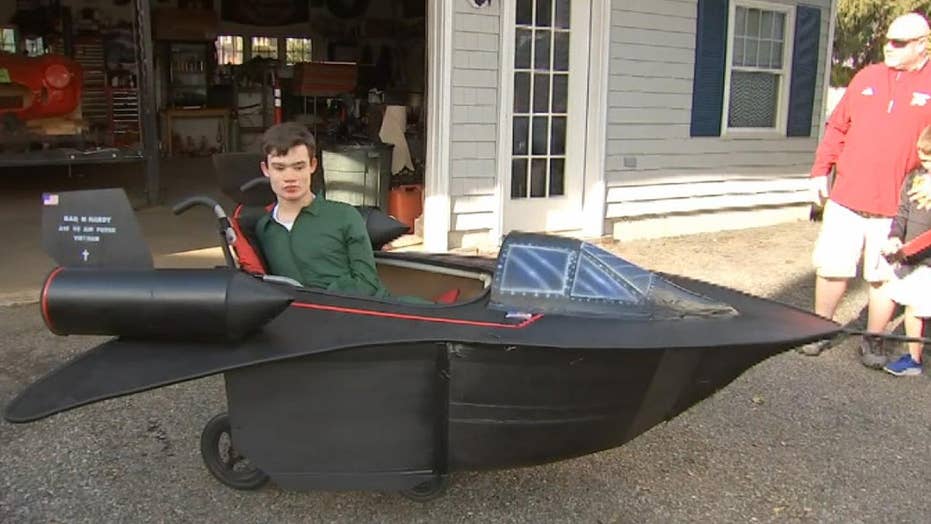 A Massachusetts dad and his buddies put in nearly 100 hours over the last month to transform his son’s wheelchair into a legendary fighter jet ahead of Halloween.

Tom Hardy, whose 15-year-old son Tommy has cerebral palsy and autism, said the tradition started several years ago and has only evolved with time, according to WFXT.

“To watch Tommy light up, not only watch him light up trick-or-treating as a kid, but also seeing the other kids around him just saying, ‘Wow! That’s an awesome costume bud,' not looking at him like he’s in a wheelchair — they’re seeing an awesome costume and just a little kid going out and having some fun,” Tom Hardy told WFXT.

Tommy’s jet, which was modeled after the SR-71 Blackbird jet, once the fastest air-breathing aircraft in operation, was made out of parts found in his dad’s garage. But this year’s model also featured several special touches in tribute to his paternal grandparents, who both served in the Air Force and died this year.

“We actually got a photo of the SR-71 cockpit and added my father and mother from their military days,” Tom Hardy told the news station, adding that his parents were “huge supporters of what we did.”

In years past, Tommy’s wheelchair has been transformed into a Star Wars X-Wing Fighter, a police car, and a dragon from “Game of Thrones.”

“Every year we just amaze ourselves,” one of Hardy’s friends told WFXT. “It’s just a lot of fun.”