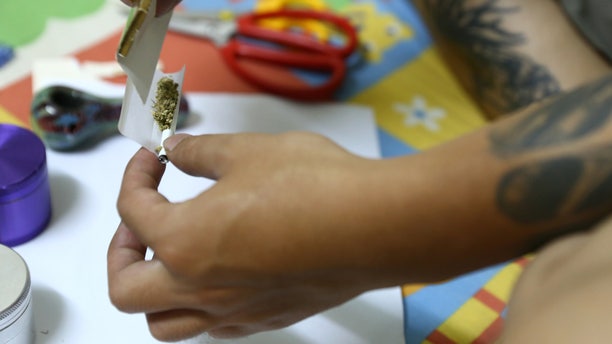 In this Oct. 1, 2013 photo, a man rolls a joint with Canadian-grown marijuana at his room in the old quarter area of Hanoi, Vietnam. Western-grown marijuana is available in Vietnam and popular among its elite, a result of its passion for imported products and the widespread involvement of Vietnamese diaspora gangs in the cultivation of marijuana in North America and Europe. (AP Photo/Na Son Nguyen). (The Associated Press)

People with certain genetic markers may be at higher risk for marijuana dependence, a new study suggests.

Researchers found a link between three genetic markers and symptoms of marijuana dependence, a condition in which people can't stop using the drug even though it interferes with many aspects of their lives, such as their relationships or their jobs.

The study is the first to identify specific genetic markers linked with marijuana dependence. However, much more research is needed in order to confirm the findings and understand how these genetic factors might contribute to marijuana dependence, the researchers said.

The investigators hope the new findings will help lead to a better understanding of the biology of marijuana dependence, said study co-author Dr. Joel Gelernter, a professor of psychiatry, genetics and neuroscience at Yale University School of Medicine in Connecticut.

In addition, future research into the genetics of marijuana dependence could perhaps identify new targets for medication to treat the disorder, Gelernter said. Currently, there are no drugs recommended to treat the condition, according to the National Institute on Drug Abuse (NIDA).

It's estimated that 9 percent of people who use marijuana will become dependent on it, according to the NIDA.

"We hope our findings help bring more awareness to the public that cannabis use is often not benign and can lead to dependence, especially in individuals at high genetic risk," Gelernter told Live Science. [11 Odd Facts About Marijuana]

In the study, Gelernter and his colleagues analyzed information from  more than 14,000 Americans who took part in one of three studies looking into the genetics of substance-use disorders. Between 18 and 36 percent of the people in these studies had marijuana dependence. The researchers looked for genetic variations, known as single-nucleotide polymorphisms, or SNPs, that were linked with symptoms of marijuana dependence.

The study found three genetic variants that were linked with symptoms of marijuana dependence. One of these genetic variants was located in a gene involved in regulating calcium concentrations in blood. Previous studies have found that calcium signaling in the body is important in other substance-use disorders, like opioid dependence, Gelernter said.

Another genetic variant was located in a gene called CSMD1, which is involved in the growth of the central nervous system. Intriguingly, genetic variants within CSMD1 have also been linked with schizophrenia risk (although not the same variants that were found in the new study), Gelernter said. Previously studies have also found that cannabis use early in life is linked with an increased risk of schizophrenia.

In addition, although the findings suggest that marijuana dependence, depression and schizophrenia might share some underlying genetic factors, it's also possible that people with depression or schizophrenia may use marijuana because they feel the drug mitigates some of their symptoms, the researchers said.

The study is published March 30 in the journal JAMA Psychiatry.