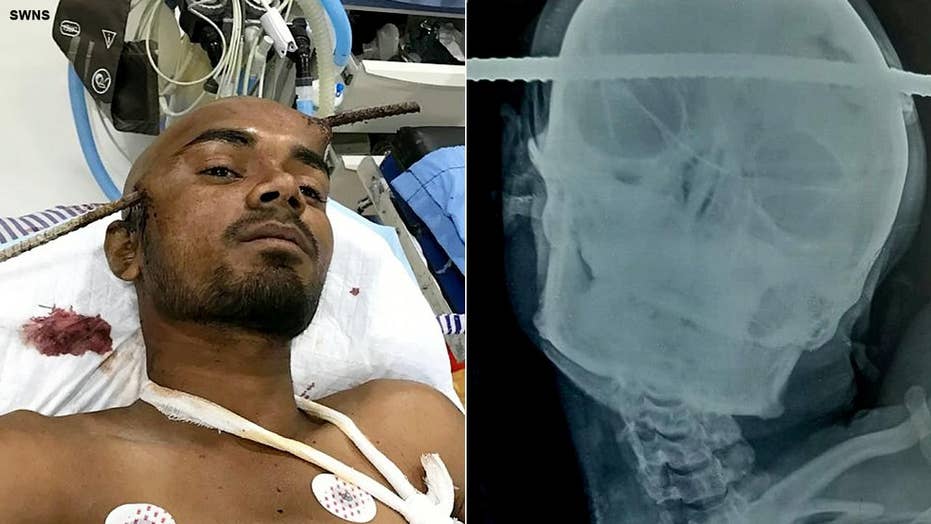 Construction worker survives after iron rod pierces through his head

A young construction worker survives what could have been a deadly accident. 21-year-old Sanjay Bahe from India underwent surgery after an iron rod pierced through his skull.

A 21-year-old construction worker miraculously survived a gruesome head injury after surgeons worked for 90 minutes to safely remove an iron rod from his skull. Sanjay Bahe, of Balaghat, India, reportedly fell down a well while doing repairs, SWNS reported.

The rod pierced from the right temporal region of his brain to the left frontal region across the midline. (SWNS)

“I performed the surgery with all caution so that damage to the surrounding structures shouldn’t happen,” Dr. Pramod Giri, Bahe’s neurosurgeon at B.J. Hospital, told SWNS.

Bahe is said to be "doing fine," and is being monitored for any post-op complications. (SWNS)

Giri said the rod missed a major vein in Bahe’s brain by mere millimeters. At one point, Bahe experienced low blood pressure. Giri said he is “doing fine” and being monitored for any potential post-surgical complications, including meningitis.