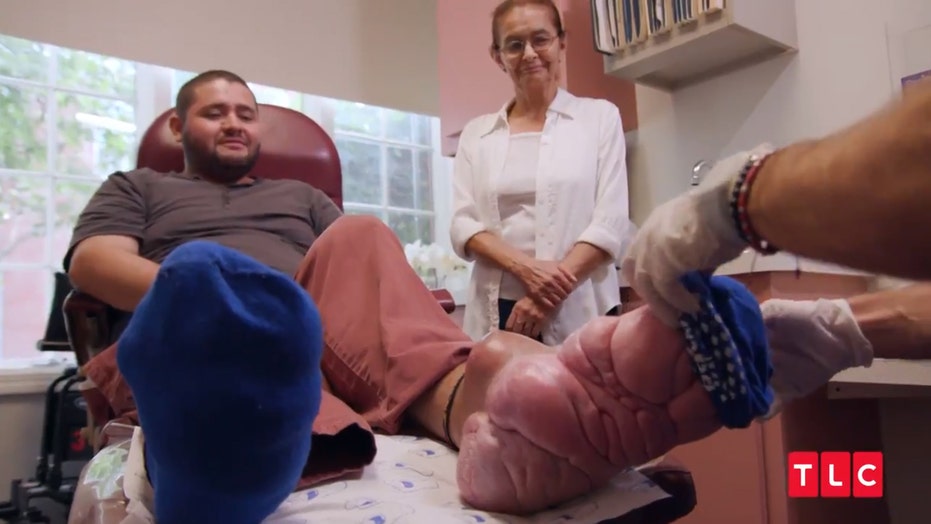 A Florida man with a rare genetic mutation that leaves him feeling like he’s “walking on glass” landed in the office of TLC’s Dr. Brad Schaeffer, desperately seeking help for what the doctor described as “the largest feet I’ve ever seen.”

Ortega has Proteus syndrome, which causes an overgrowth of various tissues in the body, primarily affecting his feet. (TLC)

Jeffrey Ortega, whose case was featured on Thursday’s episode of “My Feet Are Killing Me,” was diagnosed with Proteus syndrome, which started when he was 9 months old and has progressively gotten worse. The rare disorder causes an overgrowth of various tissues in the body, which may result in skeletal malformation, benign or malignant tumors, malformations of blood vessels, bullous pulmonary disease and certain skin lesions, according to the National Organization for Rare Disorders (NORD).

In some cases, the condition may even lead to life-threatening complications, while others may only exhibit a few mild symptoms. Treatment varies from patient-to-patient depending on the symptoms, but it typically involves multiple procedures to control the overgrowth.

For Ortega, his quest for relief has been a years-long process, with his case first making headlines back in 2015 after he started a GoFundMe page in hopes of raising money for an amputation. The amputation never happened, and on Thursday’s episode, Ortega visits Schaeffer at his New Jersey office and is accompanied by his mother, Alicia, still searching for relief.

Ortega has been searching for relief for several years and has been told by some doctors that amputation may be his best bet, but Schaeffer disagrees. (TLC)

“Jeff has a very unique situation, he has something that’s called Proteus syndrome,” Schaefer told viewers. “Proteus syndrome is very rare, and it’s progressive. There’s excessive growth with the bones and the tissues, so what we need to do just make Jeff comfortable, and answer all his questions and try to help him out.”

Ortega told Schaeffer that the syndrome primarily affects his feet, with his left foot continually growing, and added that it has affected him not only physically, but mentally as well. It's also difficult for him to find shoes that will fit his large feet, but walking barefoot could leave him prone to dangerous infections.

“It’s not a lot of movement, unfortunately,” he said of his current situation. “I can walk but it feels like I’m walking on glass. It’s very unpleasant.”

Ortega told Schaefer that he has had multiple surgeries on each leg and that he has been told about possible amputation by some specialists. However, the doctor, who said his patient's feet look "like cauliflower," disagreed and cited multiple risks, including continued bone growth after amputation. Schaeffer instead took molds of Ortega's feet in hopes of creating a shoe that would help him live a more comfortable life.