For three months, a 43-year-old man in Scotland felt sick and fatigued, often experiencing breathlessness with no relief. He sought medical attention and was subsequently diagnosed with a lower respiratory tract infection. Initially, his symptoms remedied — breathing became a bit easier and he felt less tired. But a month later, his health regressed. Further analysis led to a diagnosis of an unusual, but a very real condition.

When his feeling of malaise, fatigue and breathlessness returned, the man, who was not identified in a report published Monday in BMJ Case Reports, was forced to take 14 days off work. At this point, he even had trouble breathing when walking between rooms in his home, the authors wrote.

Puzzled, the doctor who initially treated him at the Aberdeen Royal Infirmary phoned one of the infirmary's pulmonologists, Dr. Owen Dempsey, who reviewed the patient’s history and gave him a call. On the phone, “the patient sounded alarmingly tachypnoeic,” or was breathing rapidly, per the report.

Dempsey proceeded to ask the man questions, like if he had any pets (he did, a dog and a cat), and if he was exposed to any mold (he was, there was some present in the bathroom, above the shower and window). But when asked if he was exposed to birds, or slept on featherbedding, the man said yes to the latter. Around the time he fell ill, the patient and his wife had switched from synthetic bedding to a feather duvet and feather pillows, according to the report.

The man returned to the hospital for further testing. A more detailed CT scan showed his lungs were inflamed, while blood tests showed he had developed antibodies to dust from goose or duck feathers, which are often used in down products such as duvets, pillows, winter coats and more. 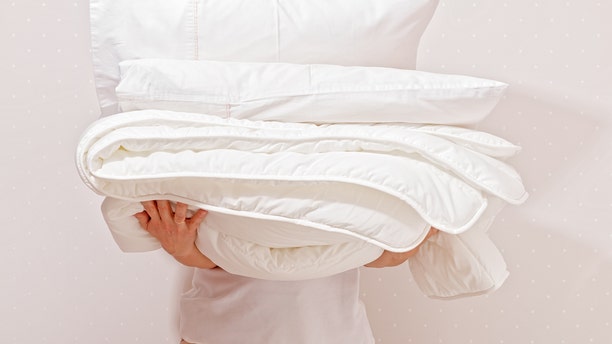 A 43-year-old man was diagnosed with "feather duvet lung" after he had trouble breathing for three months. (iStock)

The patient was subsequently diagnosed with “feather duvet lung,” a condition connected to hypersensitivity pneumonitis, a disease “in which your lungs become inflamed as an allergic reaction to inhaled dust, fungus, molds or chemicals,” per the American Lung Association.

The man was prescribed steroids and swapped his new bedding for a set made of hypoallergenic material.

“His symptoms improved rapidly within the first month, even before starting oral corticosteroids,” the doctors wrote in the report. Six months later, the man felt “completely well.”

The patient’s case serves as an important reminder for doctors to take “really detailed histories” of the people they treat, Dempsey told Live Science.

"That way they may uncover things in the environment that trigger lung disease,” he added, noting the case does not mean people who own down products should do away with them.

But, Dempsey added to The New York Times, “if you get breathlessness or a cough and it’s not settling within a few weeks of buying some feather bedding, you should mention it to a clinician.”