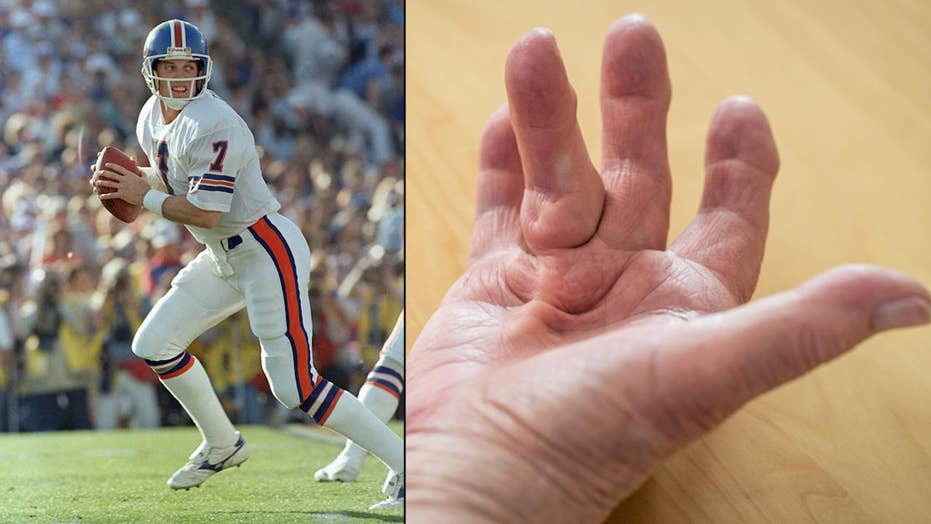 A look at how legendary quarterback John Elway has coped with and is raising awareness for Dupuytren’s contracture. Elway also reveals which defender made him the most nervous as a player and what he attributes to the gap between college and NFL quarterbacks today.

John Elway’s Hall of Fame career has solidified his place in history as one of the best to ever play the game of football, but it didn’t come without a painful price. He endured 15 surgeries during his playing days, which is why when he went to his doctor for pain in his hand back in 2005, he was quick to refuse another one, despite it being the only available treatment for patients diagnosed with Dupuytren’s contracture.

According to the American Society of Hand Surgery, Dupuytren’s contracture is a rare disease that occurs beneath the skin in the hands and is characterized by an abnormal thickening of the tissue. The now-59-year-old had never heard of the disease before, didn’t have a family history of it and probably wouldn’t have ever known about it if his finger wasn’t contracting to the point where he had trouble and was sore after holding a golf club.

“At that point in time, the only option was surgery, and so I decided that after 16 years and over 15 surgeries later, I was not going to have another surgery,” Elway, now 59, told Fox News.

Elway, whose storied career included a throwing velocity so powerful that he broke a few receiver’s fingers, instead attempted for several more years to live with the pain of the disease knowing that his symptoms would continue to worsen. He said the pain was mostly felt in his ring fingers, which is one of the most common places it’s known to occur.

He landed back in the doctor’s office a few years ago when the disease threatened to take away from him what he is most well-known for: throwing a football. In the years since his initial diagnosis, he learned that new options for patients were becoming available, including non-surgical options that are not yet approved by the FDA.

“A couple of years ago, when I had a difficult time throwing a football and really couldn’t throw a football and couldn’t get my palm on the football because I couldn’t straighten my fingers when I went back, [I] was able to find out about the non-surgical treatment and so I was excited about that,” he said.

The football legend-turned-general manager and president of football operations for the Denver Broncos has since signed on with Facts on Hand to spread awareness of Dupuytren’s contracture, a disease that affects more than 16 million people, which is “about how many people are affected by major depression.”

Elway also noted that there was no evidence of Dupuytren’s contracture when he was playing football, and that he was more concentrated on avoiding hits from fellow gridiron legends like linebacker Junior Seau.

“He was a great football player and had great speed,” Elway told Fox News, of Seau. “And I think that made him difficult to play against because you never knew where he was going to be, and sometimes he wasn’t where he was supposed to be a lot of the times, so that’s what made it so difficult.”

To hear more about what Elway has to say about the state of football today and how he sees his Broncos performing this year, watch the full interview above.