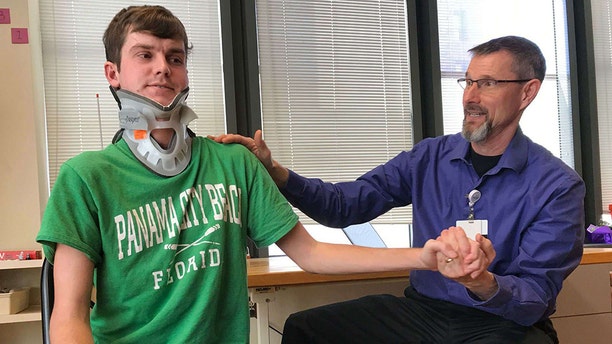 A 22-year-old Indiana man says he was internally decapitated after a car crash. (Beacon Health System)

An Indiana man who beat brain cancer as a teen has once again “defied the odds” after surviving a nearly fatal car crash in January that left him internally decapitated.

“I have fought for my life this time around, and some days I feel like I still am. God has put me through some crazy stuff, and he’s really testing me,” Brock Meister, of Plymouth, said in a statement released by Beacon Health System.

“I’m just thankful to be here, so that’s all that matters,” the 22-year-old added. 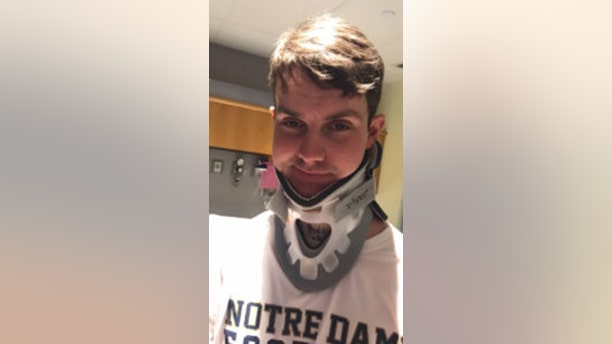 On January 12, Meister was having dinner with some friends in Plymouth before heading to Lake of the Woods, near Bremen, where he and some friends were planning to stay with his grandparents for a night.

Just minutes before arriving, the car hit a patch of black ice, causing the vehicle to tip over and roll on the passenger side where Meister was seated. 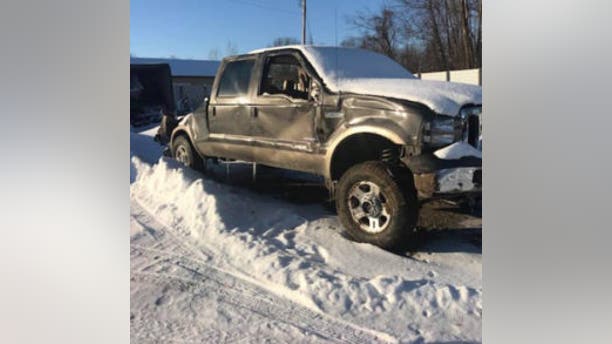 The truck that Meister was in when the accident occurred. (Beacon Health System)

Meister's head smashed into the window, shattering it, and ultimately separating his skull from his spine in the process.

“Half my body was out the window,” he recalled.

The driver was able to pull Meister back in as the truck flipped upright and slowly rolled to a stop.

Meister’s friend, Ryan Topper, who was driving ahead of the two, knew something was wrong when he could no longer see the truck’s headlights behind him. He whipped his car around, arriving just moments later. 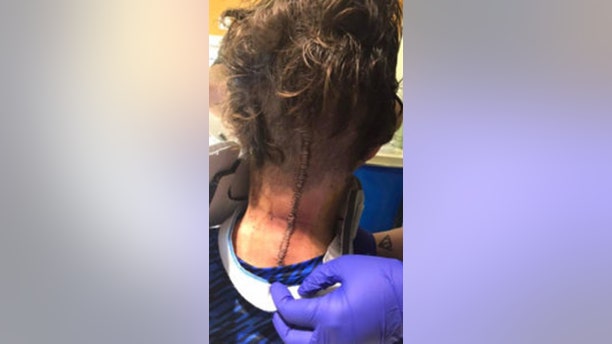 Surgeons made a long incision on the back of his neck, using a skull plate and spinal screws and rods to correct the fracture. (Beacon Health System)

“I turned around and from the angle that I drove up on it, it didn’t look like anything had happened at all,” Topper said.

But as he got closer, he saw Meister, whose face was covered in blood.

“[He] wasn’t saying much,” Topper recalled.

“Brock kept trying to get up and the only words he was saying were ‘my neck’ and ‘ambulance.’ I knew that he was in some serious pain and that if it was his neck, I couldn’t let him get up and move,” Topper, who had already called emergency officials at this point, said.

Meister was taken to Memorial Hospital in South Bend, where doctors stabilized him and took X-rays. Images revealed he had suffered a “traumatic atlanto-occipital dislocation,” essentially a "complete separation of the skull from the spine or internal decapitation,” according to the statement. 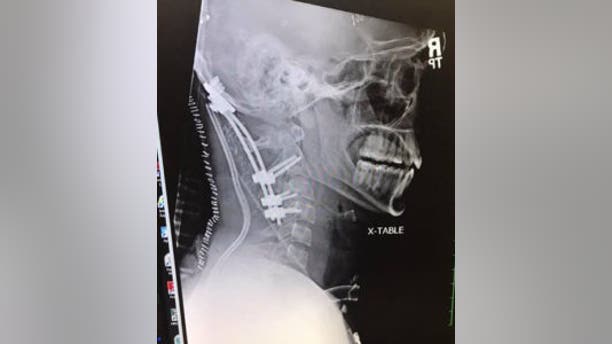 Surviving this type of injury is rare: the mortality rate for those who suffer internal decapitation is high. Aside from the physical separation of skull and spine, this injury can also be fatal because “the blood vessels supplying the brain and the spinal cord itself are commonly injured ... [causing] significant neurological deficits and often prove fatal,” according to the Beacon Health System.

Meister was just the second patient in Memorial Hospital’s history to arrive alive with this particular injury.

“He’s here and he’s alive, and that in itself is a complete miracle,” Meister’s mother, Jenna, recalled telling family and friends at the hospital.

At 2 a.m. that same night, Dr. Kashif Shaikh, a Beacon Medical Group neurosurgeon, was paged. He looked at the X-rays at home before heading to the hospital to treat Meister.

“I had to check twice to make sure I was looking at the right patient’s picture – it’s such an uncommon injury, and an even less common injury to survive,” he told the hospital.

Later, Meister underwent surgery to re-align his skull and spine. 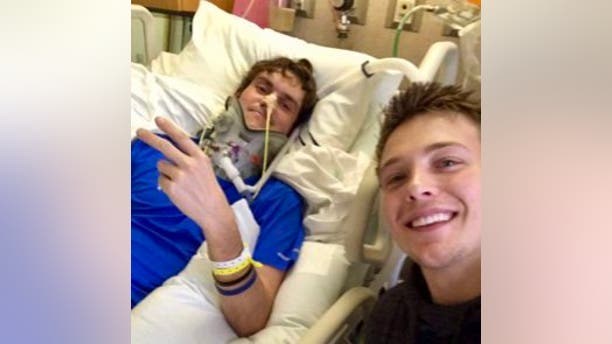 His surgeons made a long incision on the back of his neck, using a skull plate and spinal screws and rods to correct the fracture.

NEW JERSEY DAD WHO CONTRACTED FLESH-EATING BACTERIA WHILE CRABBING TO BE TRANSFERRED TO HOSPICE, FAMILY SAYS

Interestingly, Shaikh, who performed the surgery, also helped to treat Meister when a malignant brain tumor — a grade III germinoma — was found at the center of his brain in 2012. Meister was just 16 years old at the time.

Thankfully, the surgery was successful and Meister was released from the hospital in February. He was required to wear a neck brace up until recently.

"Things easily could have been more tragic and my time spent with him could be at the cemetery."

While he still has trouble with his right arm and pain in the lower part of his body, he is undergoing physical and occupational therapy at Memorial Hospital to treat those issues.

“It is truly incredible,” Shaikh said of Mesiter’s ability to survive brain cancer and the car accident.

“It’s been really hard,” Meister told Fox News on Saturday. “It makes me feel good knowing that I’m still here, but I always ask the question ‘why me?’”

“I just keep reminding myself things will get better it just takes time,” he continued, adding that he tries to spend as much time as possible with friends to “get back to somewhat normal.” 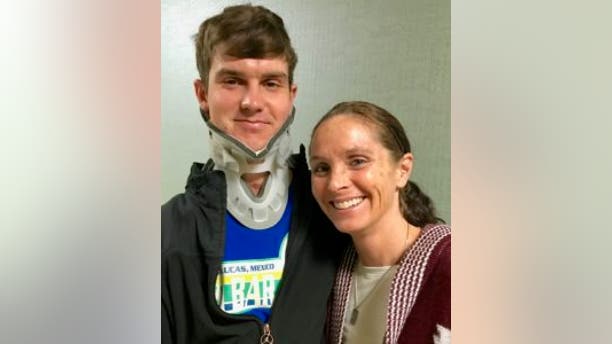 “As a mom, I know, I truly know God was there that night and saved my child. Things easily could have been more tragic and my time spent with him could be at the cemetery. Our boy is a miracle," Jenna added.

Jenna Meister did not immediately respond to Fox News’ request for comment on Friday.