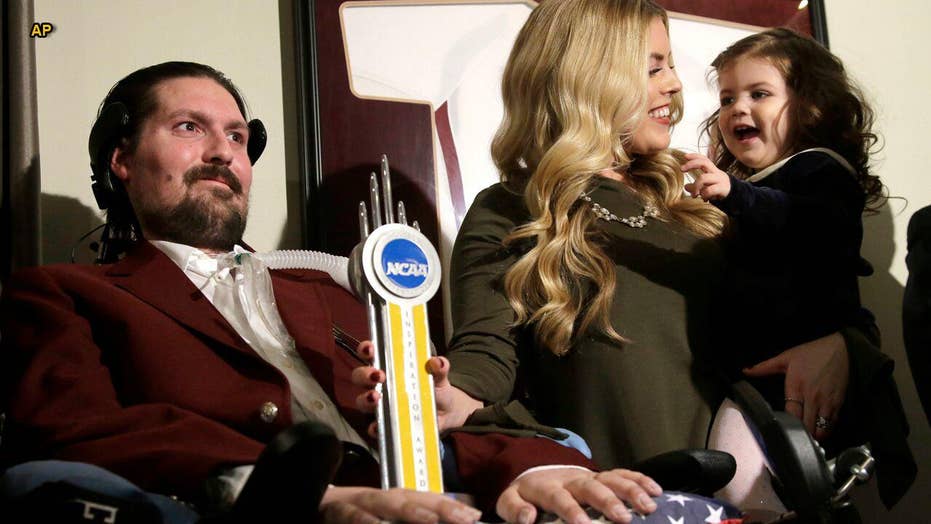 Pete Frates, inspiration behind 'Ice Bucket Challenge,' dies at 34 after battle with ALS

Pete Frates, the man who inspired thousands to participate in the 'Ice Bucket Challenge,' has died at age 34 following a battle with ALS. The viral sensation raised over $220 million for ALS research.

Nearly 1,000 people gathered in the frigid waters off Massachusetts this past weekend to drench themselves in water to pay tribute to the late Peter Frates, whose battle with Lou Gehrig's disease helped spur the ice bucket challenge.

The "Plunge for Pete" event at Good Harbor Beach in Gloucester took place on what would have been Frates' 35th birthday.

“He is laughing so hard right now at me getting into the ocean,” said Frates’ wife, Julie, who participated in the Dec. 28 plunge for the first time, wearing the bikini she wore when she first met her husband. “This is the best birthday party he could ask for and wherever he is, he is very grateful.”

People take the ice bucket challenge during the last "Plunge for Pete" event on what would have been Pete Frates' 35th birthday, at Good Harbor in Gloucester, Mass., on Dec. 28. (John Blanding/The Boston Globe via AP)

Frates, a former Boston College basketball player, died Dec. 9 after his seven-year battle with amyotrophic lateral sclerosis (ALS). Saturday's plunge was the eighth to raise money for the Pete Frates #3 Fund, which helped pay for his medical bills.

Frates' family has about $500,000 of medical debt. They hope Saturday's fundraiser will close that gap. The family plans to continue to raise money for the Peter Frates Family Foundation, which helps ALS patients cover some health care costs.

The ice bucket challenge -- which involved people pouring icy water over their heads and then posting a video of it on social media and challenging others to do the same or make a donation to charity -- went viral in 2014 when pro golfer Chris Kennedy challenged his wife’s cousin Jeanette Senerchia, whose husband has ALS.

The challenge exploded when Frates and his family got involved.

In this Dec. 28, 2014, file photo, Julie and Pete Frates smile on the sideline at Gillette Stadium during a birthday ceremony for Pete at an NFL football game between the New England Patriots and the Buffalo Bills in Foxborough, Mass. (AP Photo/Elise Amendola, File)

The challenge became a worldwide phenomenon on social media, with celebrities, athletes and public figures among those who doused themselves with cold water while calling out others to do the same. Frates was diagnosed with ALS in 2012 and gained worldwide notoriety because of the ice bucket challenge.

He was numerous awards and accolades for raising awareness of the neurodegenerative disease, for which there is no known cure.