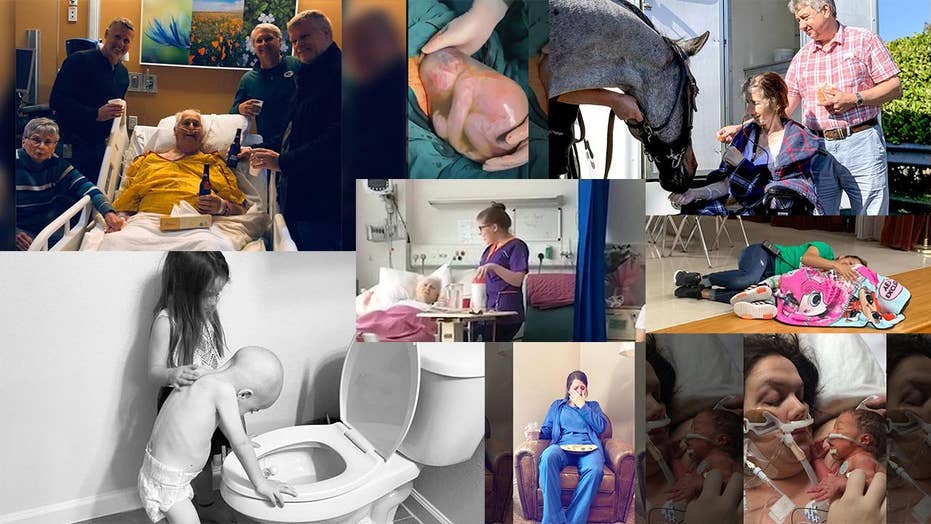 Moving moments in health: A look back at 2019's viral moments

Take a look at some of the most moving moments in health from 2019.

Pictures can sometimes reveal more about a story than any headline, or interview with a source. In 2019, many families welcomed the world into their own health journeys by choosing to share a moment of their lives that captured joy, heartbreak, triumph, grief and strength.

A woman’s touching tribute to her sister, a labor and delivery nurse who came to her house after a particularly rough shift, provided some insight into what she had gone through during four days of work.

Laura McIntyre snapped a photo of her sister, Caty Nixon, crying on a chair in her house while still in her blue scrubs. McIntyre said her sister "is so good at what she does that she often forgets how to take care of herself while she's taking care of her patients." At this particular moment, McIntyre shared that her sister had stopped over for dinner after Caty had assisted in the delivery of a stillborn baby. Her salute to her sister and nurses everywhere was shared over 133,000 times.

Schemm posted a photo of his family's special memory on Twitter, where it gained a large response. (Adam Schemm)

When Adam Schemm posted a photo to Twitter of his grandfather enjoying a final beer with his sons before succumbing to cancer hours later, he set off a trend that saw hundreds posting their own final moments with loved ones in response.

“My grandfather passed away today,” Adam Schemm, himself a father of two, wrote on Nov. 20. “Last night all he wanted to do was have one last beer with his sons.”

The photo shows Schemm’s grandfather smiling in his hospital bed holding a Bud Light while surrounded by his three sons, all holding cups of their own, as well as his wife, who is holding his hand. The photo resonated with over 334,000 people on Twitter.

Ms. Esther climbed up on stage and laid next to a student who was struggling with the noisy cafeteria.  (Hollie Bellew-Shaw)

Kenlee Bellew-Shaw, a fourth-grader at Melba Passmore Elementary School in Texas, was having a rough day last week when a custodian affectionately called “Ms. Esther” by the students took notice. Kenlee's mom, Hollie, said her daughter has autism, and when Ms. Esther saw Kenlee climbing up on stage and hiding under a blanket, the woman climbed up and laid next to the student to help calm her down.

“All schools should be so lucky to have their own Angel on campus,” Bellew-Shaw wrote on Facebook. “Feel free to share so she can get all the appreciation & thanks she totally deserves.”

Aubrey, 5, was snapped comforting her brother, Beckett, 4, as he struggled with the side effects of his cancer treatment. (Kennedy News and Media)

Heart-wrenching photos of a 5-year-old girl gently supporting her 4-year-old brother as the side effects of chemotherapy disrupt their playtime went viral after their mother, Kaitlin Burge, shared a raw post about how childhood cancer impacts the whole family.

Burge's son, Beckett, was diagnosed with acute lymphoblastic leukemia (ALL) in 2018, and his big sister, Aubrey, has watched him struggle, supporting him in any way she can while also struggling to understand what's happening to her young brother. Burge snapped the photo of the two of them while Beckett was getting sick from side effects of treatment and said that too often, the impact that childhood cancer has on the family and the other kids in the house goes overlooked. Burge’s post has been shared over 40,000 times and inspired supporters to share photos of their own children supporting a sibling through a cancer diagnosis and illness.

Incredible footage captured the moment that a baby boy in China was pulled from his mother’s womb while still inside an intact amniotic sac. The baby, who was delivered in July via C-section at 36 weeks gestation, was in the breech position and had an umbilical cord complication that made the early birth necessary.

Delivering a baby en caul, which is when the amniotic sac stays intact, can be done on purpose, although it’s still a rare occurrence. Dr. Pan Mian, of Fujian Maternity and Child Health Care Hospital in East China, said he decided to deliver the baby en caul because he was premature. 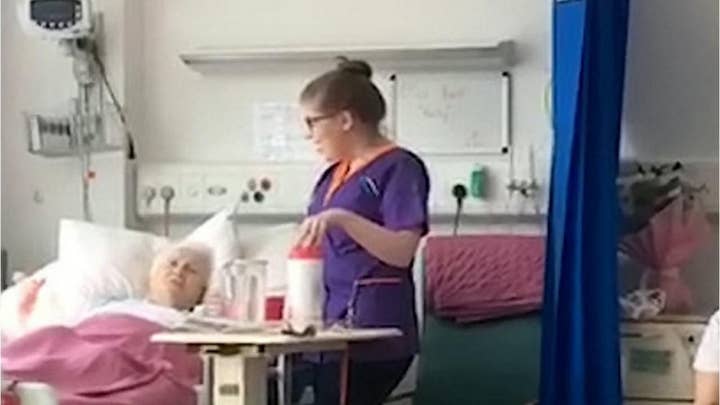 A heartfelt moment between a nursing student and her patient was captured on a cellphone video by another patient, who then shared it with the ailing 87-year-old’s grateful family. Nurse Brittany McArthur, 21, who is caring for Nellie Barr, comforted her patient with a soothing version of “Amazing Grace.”

“Nursing isn’t just about the clinical care, it’s about caring for the whole person,” she told SWNS. “It is more than just medicine. I want to make a difference and if I can make someone smile even for 10 minutes then that’s fine by me.”

Tracey Dunne was granted one last wish by the hospice staff at St. Luke’s - to see her 17-year-old horse Malone one more time. (SWNS)

A terminally ill woman’s dying wish to see her horse was granted recently with the help of her hospice care team and husband of 30 years. Tracey Dunne, who is in her 50s and was diagnosed with an unidentified cancer, always enjoyed “nature and getting muddy,” her husband, Tim, told SWNS. So when she expressed her wishes to spend time with her 17-year-old horse, her care team at St. Luke’s Hospice in Plymouth, U.K., sprang into action.

Dunne’s caregivers helped arrange for Tim to bring the horse, named Malone, for the visit, which was caught on camera.

8. Mom who nearly died after giving birth shares moment she met newborn son: 'Luka and I needed each other'

A Missouri mother who almost lost her son at 8 weeks pregnant due to a rare complication and then underwent life-saving surgery after his premature birth said it was the nurses who arranged for her to meet the newborn baby before she went in for the operation who helped save her life two years ago.

“Luka and I needed each other, and we needed to meet each other,” Sharee McCoy, who suffered massive blood loss after Luka’s birth, said. “She could potentially have saved both of us,” speaking of the nurse who brought mother and son together.