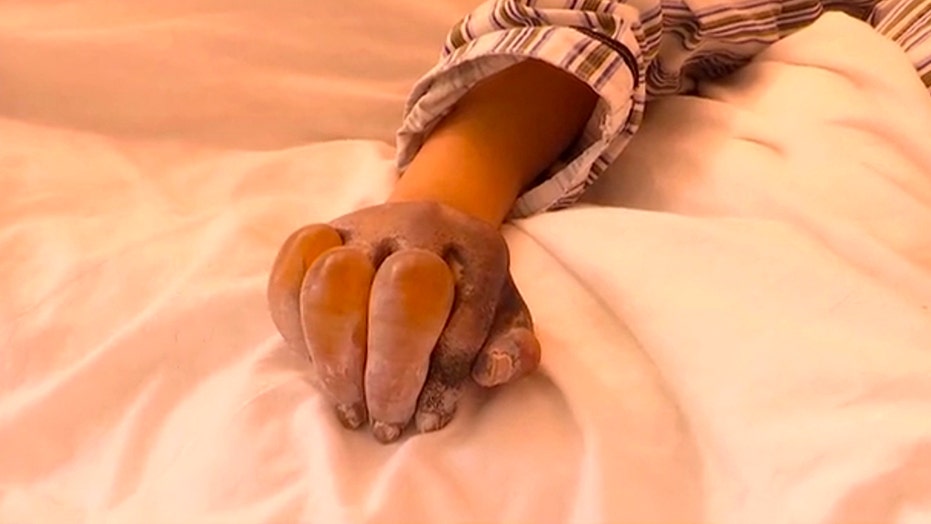 A 13-year-old girl in China is facing possible amputation of multiple fingers after she was allegedly forced to shovel snow for hours in frigid temperature by her school. Lu Yanyan, who allegedly shoveled for hours on Dec. 31 without any gloves, now has swollen and blackened fingers due to frostbite.

The 13-year-old's condition has reportedly improved but continues to be monitored by a burn specialist.  (AsiaWire)

Frostbite is an injury caused by the freezing of the skin and underlying tissues. It’s most common on the fingers, toes, nose, ears cheeks and chin, according to MayoClinic. Symptoms may include cold skin with a prickling feeling, numbness, red, white, or bluish-white looking skin, blistering after rewarming or other joint issues.

WOMAN MISTAKENLY TOLD SHE HAS CANCER AFTER HOSPITAL SENDS LETTER WITH TYPO: 'IT'S SHOCKINGLY BAD'

Deep frostbite may turn the skin white or bluish gray, and it may cause numbness, losing of all sensation, and the joints or muscle may no longer work. Blistering after rewarming is common in these cases, with the area then turning black and hard indicating tissue death, according to the MayoClinic.

Yanyan reportedly told local media that she alerted her teacher to her numbed hands, but she wasn’t admitted to the hospital until six hours later.

“Her frostbite was the result of long-term exposure to the elements,” said Fan Weiwei, a burn specialist at Daqing Oilfield General Hospital, who is treating Yanyan, to AsiaWire. “When she arrived, the ends of her fingers were black. Her condition is improving, and her fingers are now a lighter shade of purple.”

Weiwei’s team will reportedly monitor her condition for the next several days before issuing a final decision on whether to amputate her affected fingers.