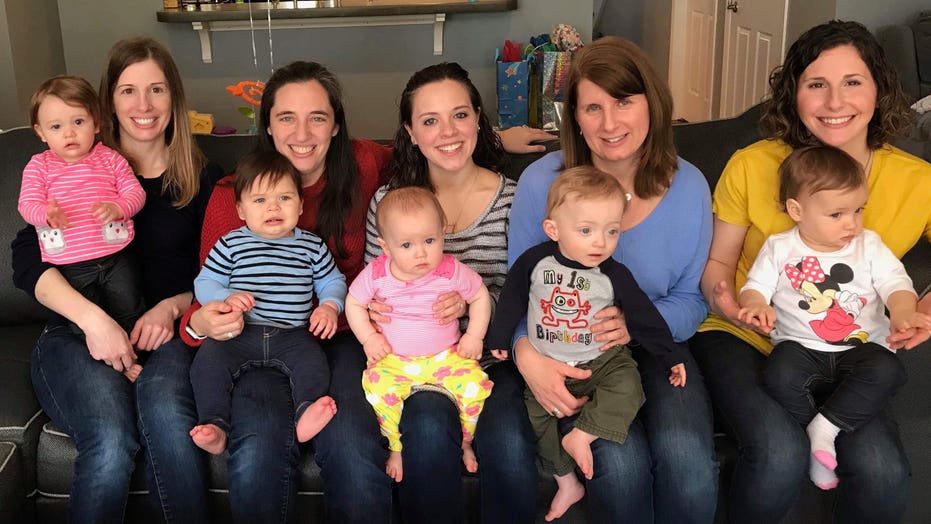 A group of five women in New Jersey who were dealing with infertility issues say they’re now bonded for life after becoming mothers within three months of each other.

HOW DOES IN-VITRO FERTILIZATION WORK?

But after the initial stress and mental anguish, the women soon became more comfortable sharing their experiences and worked together to provide each other with support.

“We would chat about our symptoms and ask for advice. There were times where I felt: ‘Will I ever be a mom?’” said Thomas, according to SWNS.

“To be able to share those feelings with four women who completely understood was amazing.”

The five women returned to the support group month after month while undergoing IVF procedures in their attempts to conceive.

They also soon became friends, sharing updates on their progress with each other on Facebook, or in person.

“Celeste, Kristen, Kristin and Amie were the most positive and supportive women in the group,” explained Berg of why they stayed in touch, according to SWNS.

“We tried to help each other find the silver lining and buoyed each other’s spirits when things didn’t go according to plan.”

“We just hoped and prayed that it would work for all of us and by some miracle it did,"  said Kristen Heller, one of the new mothers. (SWNS)

In June of 2016, however, Zazzali became the first of the women to become pregnant. A few months later, Heller became pregnant as well. And then Berg, Thomas and Matty followed.

“We just hoped and prayed that it would work for all of us and by some miracle it did," Heller remarked.

The five women soon began sharing updates and photos all the time, celebrating each milestone and throwing baby showers for each other.

Within three months of each other, the women welcomed (L-R) Penelope, Adam, Layla, Annarose and Colton. (SWNS)

The women now remain friends, and meet up to take their children to mommy-and-me classes in New Jersey.

“I can’t imagine that we will drift apart because all five of us have this connection,” said Zazzali.

“I foresee a lot of playdates and birthday parties and I see this group sticking together for life.”